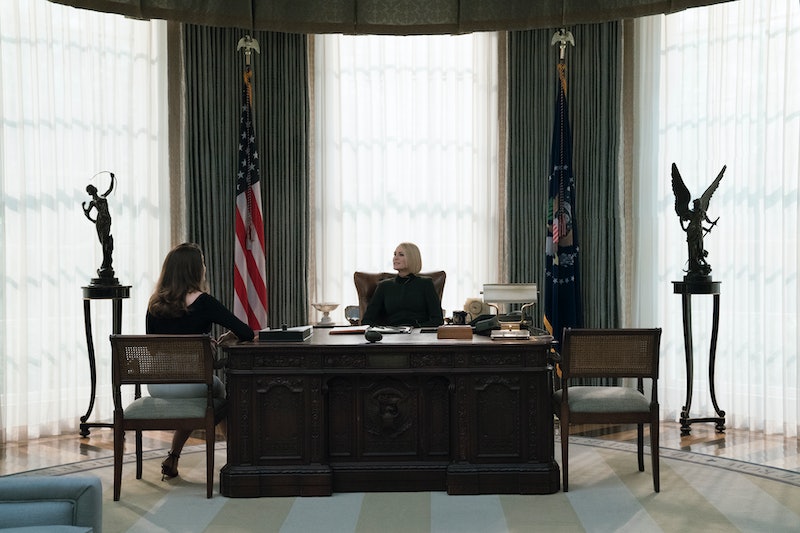 Series finales are often the clearance sales of television, and Season 6 of House Of Cards is no exception. In true "Everything Must Go!" fashion, the show that was not afraid to kill off side characters brings a rain of death among some of the series most lasting supporting characters, and ends with the death of one of the most important characters in the show's history. Of the people who die in House Of Cards Season 6, no death has a greater impact than the off-screen death of Frank Underwood between Season 5 and 6, but that still left plenty of room for House of Cards to get bloody before its conclusion.

While the show has peppered death throughout its run — from early casualties like Peter Russo and Zoe Barnes to the late-run deaths of Meechum and, apparently, LeAnn Harvey — Season 6 manages to pack three of its four major deaths in a Godfather-style sequence at the end of Episode 6. Claire Underwood may not be quite the monster that Frank was, but she's clearly willing to get ruthless when the circumstances require her to do so. Those three deaths, however, pale in comparison to the death that concludes the run of Netflix's first major streaming hit.

Jane Davis, played by Patricia Clarkson of Sharp Objects fame, got in the way of the Underwoods by making one of the most fatal mistakes one can make in House Of Cards — suggesting an Underwood not do something ridiculous that will put the country at risk. Jane Davis spends much of her time in Season 6 suggesting that President Claire Underwood shouldn't impeach her Vice President, a thing that has never happened, and for that she died.

It took a while, but an Underwood finally managed to do Cathy Durant in for good. After being pushed down the stairs by Frank Underwood in Season 5, Durant seemingly gets abducted and is reported dead — only to reveal that she's actually alive after all and was applying some Underwood-level schemery to try and take down the presidents she used to serve. Her plan to fake her own death may have worked had she not been shot with a gun at the command of Claire, but alas, she was very much shot.

The journalism industry is brutal right now — Print is dying, and so is Tom Hammerschmidt. One of the show's longest-running recurring characters, the former Editor-in-Chief of The Washington Herald was a thorn in the side of the Underwoods for a long time. Unfortunately, just as he seemed to finally be getting close to proving all of the Underwoods' crimes, Claire had him assassinated.

As if his death wasn't sad enough, he's shot in the back of the head while trying to comfort his dog from the presence of a gunman. Luckily, he had uploaded all of his files to a USB drive that he secures on the dog's collar, in the hopes that Janine Skorsky finds it later (she does, to no avail). Long live Tom Hammerschmidt, one of maybe three decent people in the entire House of Cards universe.

In a way, Doug Stamper died when Frank Underwood did. Bringing Frank Underwood to power and solidifying his legacy was Doug's life mission, and losing him left him listless and uncertain of his place in the world. In another, more literal way, Doug Stamper died when Claire Underwood drove a letter opener into his gut in the Oval Office. After planning to assassinate Claire herself, he stumbled and allowed Claire an opportunity to take care of him first. House of Cards fans will never know if Presidents get in trouble for murdering people in the Oval Office, as the show ends with Claire holding Doug's bleeding body, staring into the eyes of the audience.

There is a great deal of death in House Of Cards' final season, from actual death to never-ending conversations about the death of Frank Underwood, to the suggested deaths that occur after the events of the series from the nuclear weaponry that Claire had been preparing to target other countries with before her fateful meeting with Doug. While some characters' stories seem to fade off before their deaths, the House Of Cards series finale shows that the biggest death of the entire series is the death of the lie that Frank Underwood was a good mean.