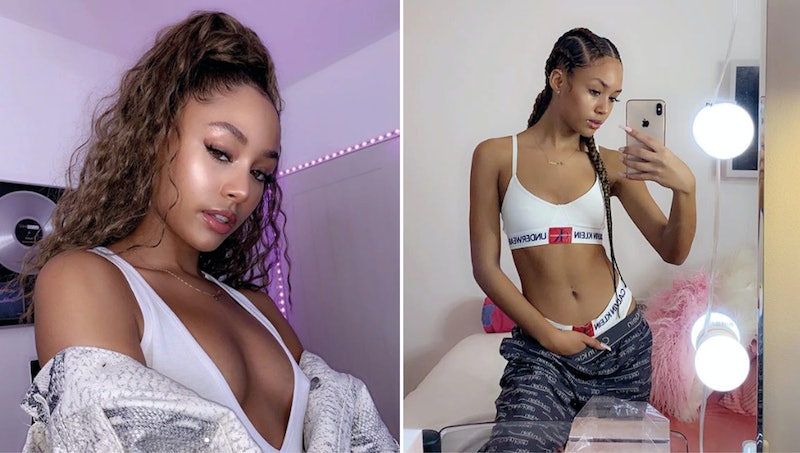 If you're still trying to play catch up with all the new artists from 2018, then you might want to hurry it along. The coming year promises tons of fresh sounds and new artists who are bound to make big waves. It's always nice to know an artist before everyone else, and the next one on your list should be Amelia Monét, the R&B artist who NME has named one of its most essential artists of 2019. She has my personal seal of approval too, but who is Amelia Monét, the musician you'll add to all of your playlists in 2019?

According to NME, Monét is perfect for fans of Rihanna. And if you have heard of her before, it's likely because of her fiery debut single "Baddest," which reportedly "racked up one million streams in a single week." As of writing, it currently has well over six million plays on Spotify, so at that rate, it looks like Monét is set to be pretty huge.

Best of all, this actress-cum-musician reportedly holds the title of the "longest serving Nala" in the West End production of The Lion King. Who said The Lion King was just for Beyoncé?

She told Wonderland Magazine on Oct. 29, 2018 that playing Nala was " one of the best experiences of my life," as she gushed: "You just feel so powerful on that stage, I can’t even describe it." Her foray into music will surely only continue that rush, and from the looks of some of her live performances, her onstage presence is seriously powerful.

Like many a millennial musician, Monét's an all-rounder, and when she's not singing, she's vlogging. She currently has 123,000 subscribers to her Youtube channel, where she posts skincare routines and beauty tutorials. She's also making pretty big waves over on Instagram. She's only released one song to the public, yet she still boasts an impressive 367,000-strong following. Follow her for some straight-up fierce selfies.

She's currently signed to the enormous Columbia Records, and as written in her artist bio, she has "goals to work with the likes of Jhené Aiko and Fredo." According to her Twitter, she's currently in the midst of recording, and since it's her debut, I reckon she'll try and draw you in with some tasty collabs.

Until then, it's time to keep pressing the repeat button on her single "Baddest." You should also make sure you're following the singer on all of her socials, as this is someone you're gonna want to get obsessed with from the very get go. I'm seeing huge stadium shows, awards, and earworm singles in the near future. Now, go and spread the word. Amelia Monét is this year's one to watch.