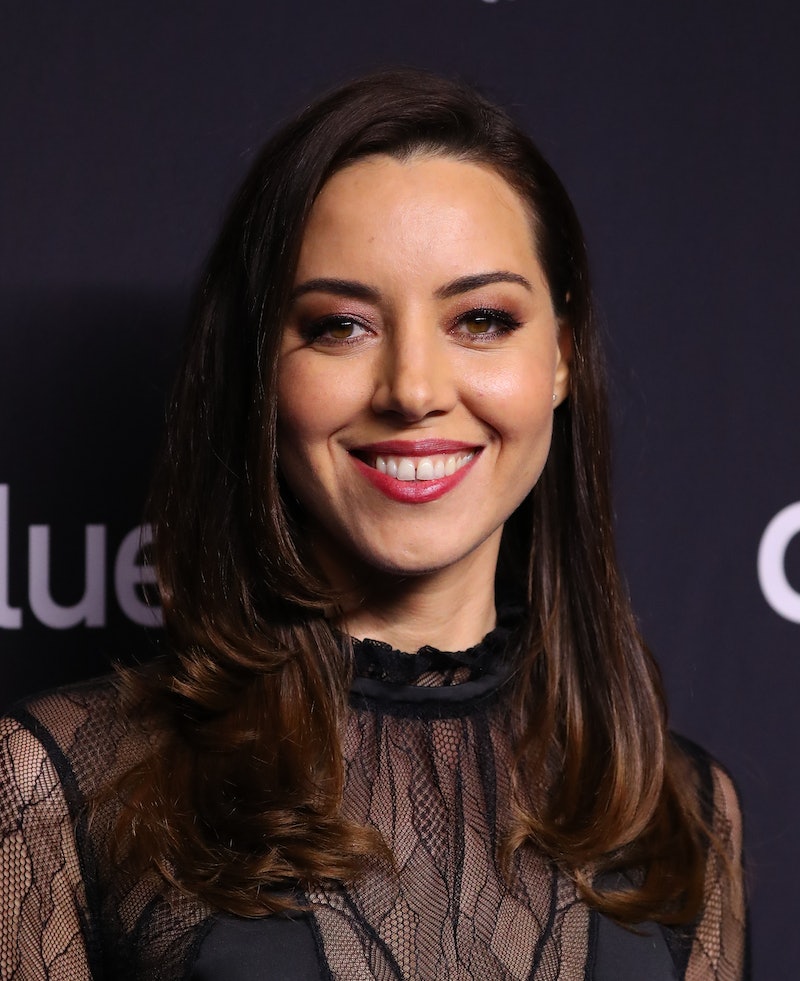 While Aubrey Plaza is currently starring in the horror film Child’s Play — where she plays the mother, Karen Barclay — her off-screen life is a bit more under-wraps. If you're wondering who Aubrey Plaza is dating, for instance, she tends to keep things pretty private. But there are some details about her love life available, including that Plaza is dating screenwriter and director, Jeff Baena.

According to the New York Post, the two have been together since 2011. In her February 2017 interview with the Post, Plaza revealed the two share an obsession with movies. They even watch DVDs pulled from Baena's alphabetized library. Back in 2013, in an interview with Cosmo For Latinas, Plaza also opened up about her boyfriend and some of their other hobbies that don't include films or red carpets. She told the magazine, "We're happy having people over and playing Settlers of Catan or Battlestar Galactica. We're kind of dorks."

Since they started dating, Baena has directed Plaza in three movies: Life After Beth, Joshy, and The Little Hours (which Plaza helped produce). The couple seems to have a nice balance between working together and dating, where Baena doesn't get involved with Plaza's career unless being asked. In an interview with IndieWire in June 2017, Baena said, "I don't have ideas about the way her career should go, so I don't feel comfortable telling what she should or shouldn't do. But, if she asks for my opinion, I'll chime in."

Before she started dating Baena, she's only gone public with one other guy. As reported byVanity Fair, Plaza discussed her past relationship with Michael Cera in a 2016 interview on RuPaul’s podcast What's the Tee? She started dating Cera while filming Scott Pilgrim vs. the World in 2010. Plaza even went on to admit that she almost got married to Cera in Vegas. The couple broke up after about a year and a half, but remain good friends.

"We love each other, and we're still really good friends," she told RuPaul during the podcast. "He's just a weird little freak, and we speak the same language."

In 2016, the Parks and Rec alum not only opened up about her past with the Juno actor, but she also opened up about her sexuality in an interview with The Advocate. She told the publication, “Girls are into me that’s no secret. Hey, I’m into them too. I fall in love with girls and guys. I can’t help it.”

While Plaza "can't help" who she falls in love with, she does choose to keep her current relationship a little less public. While Plaza and Baena have collaborated on projects, they rarely grace social media as a couple. Baena’s Instagram is private, and he does not have a Twitter.

Even among the 379 posts on Plaza's Instagram, only a handful show Baena, the latest being a birthday tribute back in June 2018. Along with a slideshow of images showcasing her humorous dark side, Plaza wrote, "Birthday Baena."

Plaza and Baena relationship is displayed only on rare occasions, but when it is, it appears they bring out the best in each other — both in their personal lives and their careers.