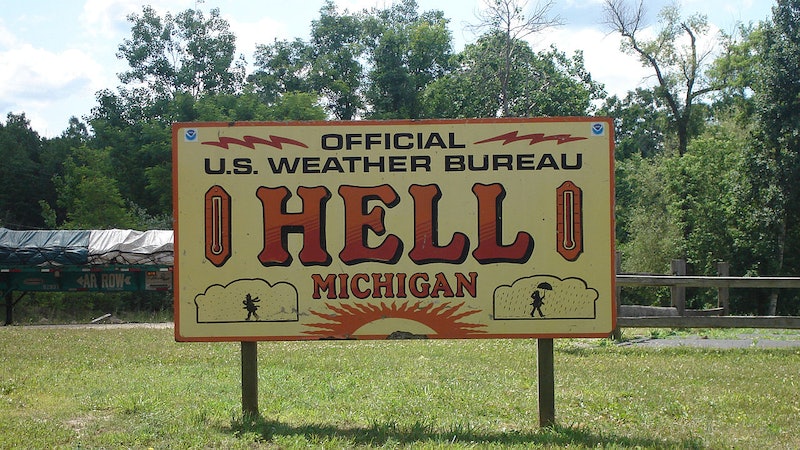 On August 30, YouTube comedian Elijah Daniel might have become the first American mayor who tried to make heterosexuality illegal. Previously most well-known for his work of erotic fiction, Trump Temptations: The Billionaire and the Bellboy, Daniel was reportedly looking for a town to make him mayor so he could carry out his “anti-straight” agenda. Lucky for Daniel, in the unincorporated town of Hell, Michigan, there are no mayoral elections. New mayors are sworn into office and then impeached all the time in Hell, because the role is ceremonial and it only takes $100 to snag the gig in the first place. Daniel told Huffpost when he realized how easy it is to become mayor of Hell, he “caught a redeye to Michigan and got sworn in.”

Almost immediately after Daniel took office Wednesday, he declared heterosexuality illegal in a proclamation which was reportedly inspired by Trump’s Muslim ban from last January. “My ban is a copy-and-paste of Trump’s Muslim ban, but with heterosexuals instead,” Daniel told HuffPost. Daniel’s declaration cited the fact that he grew up hearing about how gays go to hell, but “now the heterosexuals are trying to take that from us, too.” Which is evidently why, as mayor of Hell, Daniel promised to establish “new vetting measures to keep radical heterosexuals out of our town.”

Daniel’s proclamation also encouraged Hell’s straights to seek out “reparative therapy” in order to realize their unfound gayness. (Take that, Mike Pence.) Alternatively, Daniel declared all non-conforming heteros would be forced to don cargo shorts and a scarlet “H” every morning before being subjected to public straight-shaming in the town square. The satirist wasn’t without mercy, though. In an effort to avoid appearing too bigoted, Daniel decreed that straights would not be deported from Hell if they were willing to pay an $84,000 reproductive precautionary deposit, which would only be returned “after one year of abstinence from any heterosexual activities.”

Even though Daniel was impeached immediately after attempting his straight ban, which is quite unconstitutional, he told HuffPost there’s no hard feelings between him and Hell. As Daniel put it, “Everyone who becomes mayor there gets impeached. Most of the people who visit are same-sex couples who want to be married in hell.” In fact, Daniel told HuffPost he’s such a big fan of Hell after his visit that he thinks Donald Trump “should go to hell anytime.”

More like this
Jujubee’s Humble Reminder
By Sam Ramsden
Megan Barton-Hanson On Bi-Visibility & The Need For LGBTQ+ Love Island
By Sam Ramsden
34 Quotes That'll Inspire You On Juneteenth & Beyond
By Syeda Khaula Saad and Siena Gagliano
What Is A “Softboy?” The TikTok Term & Aesthetic, Explained
By Courtney Young
Get Even More From Bustle — Sign Up For The Newsletter