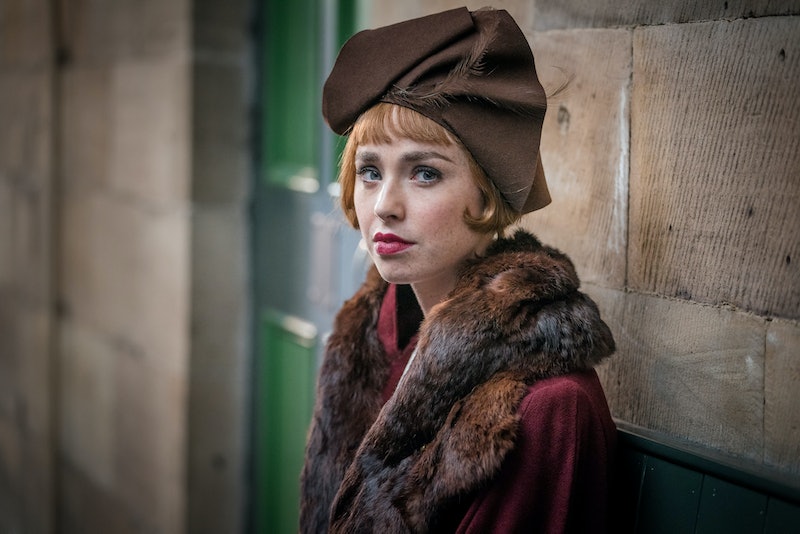 This year, plenty of people across the nation have been waiting patiently for Boxing Day — not just for the cold turkey sandwiches, but for the BBC adaptation of Agatha Christie's The ABC Murders. Hype for it has accumulated more than the Christmas wrapping paper, now spread all over your house, and this excellent murder mystery should take your mind off all the cleaning that's still to be done. The adaptation boasts an incredible cast, with some very well known faces, and some lesser known talent — including the actress who plays Thora Grey. But who is Freya Mavor?

When you grow up as a millennial in the UK, you don't forget a face like Mavor's — and that's because she first appeared on the screen in the show that's defined a generation — I'm talking about Skins, of course. She first appeared on the show as the spoiled and stroppy Mini McGuinness, and made her debut TV appearance on Jan. 27, 2011, according to the Skins IMDB page. However, her role as Thora Grey is worlds apart from McGuinness. This time around, you'll see Mavor playing assistant to Sir Carmichael Clarke Chris Villers (played by Chris Villers), but she'll add a lot more to the drama than just that.

Mavor's been cast alongside some pretty intimidating and reputable talent, including Rupert Grint, and none other than John Malkovich — who plays Hercules Poirot — but she won't have felt too out of her depth. She's worked with Malkovich previously, which she told Vogue.co.uk about on Dec. 26, saying that they'd met two years prior when he directed her in his production of A Good Canary at London's Rose Theatre.

"That experience felt like a real turning point for me so the chance to work alongside him was a huge appeal," she says, as well as referring to Malkovich as "One of the loveliest people I've ever worked with." Mavor's scooped up a ton of screen and stage experience since captivating critics with her first role as McGuinness, and she's developed her own acting methodology in that time.

Mavor told Vogue.co.uk that she likes to "attribute two animals to each role I play," explaining that "It helps me imagine how they move, act and behave." So, what animals did she imagine Grey as? "A spider and a fox," apparently — see if you can spot any fox or spider like movements in her performance.

In the meantime, feel free to scroll through her Gram. If Instagram can be highbrow, then that's exactly what Mavor's is. In between Immanuel Kant quotes and Renaissance era art, she posts some pretty classy selfies, as well as photos of a young Leonardo DiCaprio. The perfect feed, you might say.

She's less active on her Twitter, but she does post from time to time — most recently in support of the campaign to repeal the 8th, as well as some tirades against Trump. I think she might be my kind of girl. Fall in love with her yourself, and catch her on The ABC Murders on BBC1 at 9 p.m. on Boxing Day.