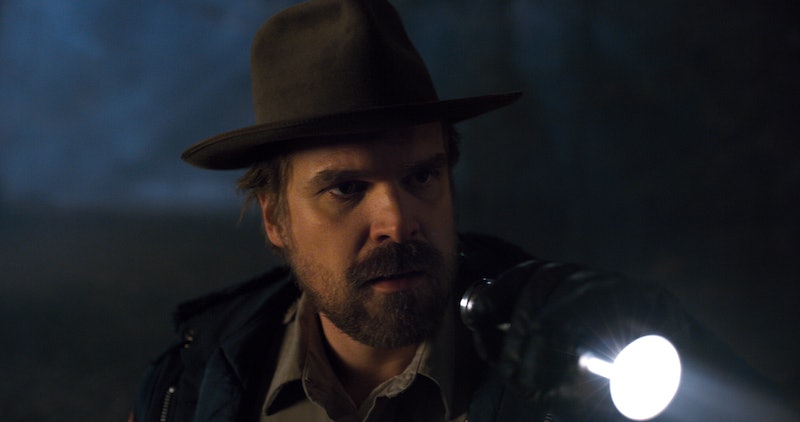 A Stranger Things theory that fans thought was deader than the Demogorgon may have some life left in it yet. In a recent interview with TV Guide, actor David Harbour revealed Hopper's daughter is a major part of Stranger Things Season 2. The hard-drinking Hawkins Sheriff lost his daughter, Sarah, to cancer when she was young, so this news should have the theory mill hard at work. Harbour wouldn't clarify if Hopper's daughter would be appearing in the present day, or if she will simply be on his mind in the aftermath of the previous season's events. But the idea that she could be an important part of the plot means its time to revisit the idea that Hopper's daughter may not be dead after all.

One thing is certain, Sarah is going to play a major role in Hopper's Season 2, arc, and it's hard not to wonder if that means she has a direct connection to Eleven. Harbour told TV Guide,

"Hopper's daughter will be the primary focus of Season 2, but not in the way that you think it will be. Hopper's understanding of that relationship and Hopper's understanding of being a father and of being a man grows deeper and deeper in Season 2, and we get a lot of time to explore what that is, but it won't be in the literal way that you think it is."

The last time Hopper is seen in Season 1, he leaves Eggos in the woods for Eleven. It's a scene that hints Hopper and Eleven will meet again, and that he may even step into the role of her father. Although, some fans have speculated that Eleven is Hopper's daughter.

Since Hopper has met Eleven and he didn't seem to recognize her, it's hard to believe that she's the daughter he lost — although, not completely out of the question. Even though Millie Bobby Brown didn't play Sarah in the flashbacks, that doesn't mean she's not Sarah. The daughter Hopper lost was much younger than Eleven, so it wouldn't have made since for Brown to play her. Still, it's far easier to believe that she and Eleven were part of the same program.

Eleven's name suggests she's one of several test subjects, and Sarah could be part of the same group. Just because she died onscreen doesn't mean Sarah's not among the living. Remember, the people who had Eleven are adept at faking deaths. After all, they produced an identifiable body for Joyce to bury despite Will still being alive. Because of the Will fake-out, nothing can be ruled out when it comes to the world of Stranger Things.

If Sarah has been experimented on like Eleven, then Hopper could meet a very different little girl to the one he lost. An even more heartbreaking option is the idea that she didn't survive the tests. That could draw Hopper and Eleven even closer together, and increase the sheriff's commitment to exposing the institution that's turning children into weapons. (Not to mention opening portals to an Upside Down world full of monsters.)

Exactly how Hopper's daughter fits into Season 2 could be a game changer for the sheriff and Eleven. Harbour's statements about Sarah are definitely open to interpretation, but TV Guide also noted that Hopper's daughter's role in the new season is being treated with "code word" levels of secrecy. And that speaks volumes.

The chances that Sarah has a connection to Eleven or the Upside Down is high. Whatever happens next is going to affect Hopper in a major way, and perhaps leave Stranger Things even stranger than it was before.