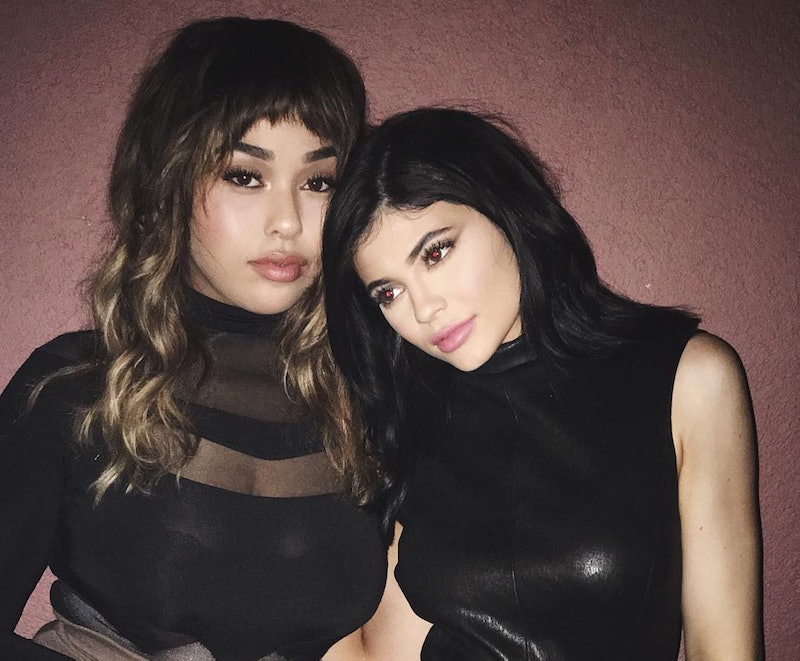 For the most part, Kylie Jenner's life is an open book. She's been starring on Keeping Up With The Kardashians since it began in 2007. Plus, thanks to social media, it's almost like her fans are part of her inner circle too, which is how they all got to know Jordyn Woods, Jenner's onetime BFF. Introduced to the world via her frequent appearances on Jenner's Instagram and Snapchat, Woods amassed her own following, and has since become an influencer all on her own.

Woods was first introduced to KUWTK fans through Jenner's social media, and she later made a few appearances on the show's later seasons. She also appeared on Jenner's spinoff, Life of Kylie, and there was a time when Woods and Jenner's friendship was a major part of Jenner's Instagram. But, now that she and Jenner aren't really friends anymore, fans wanting to learn more are going to have to do a bit more research.

Woods has been in the public eye for a while, but she hasn't opened up her life to outsiders quite like the Kardashian-Jenners. So, though you may be able to recite the entire Kardashian-Jenner family tree by heart, you may not be up-to-speed about everything to know about her. So, here's what you need to know to understand who Jordyn Woods really is.

1. Her Mom Is An LA Socialite

Woods' mother Elizabeth is a popular Los Angeles socialite, according to Entertainment Tonight. On her Instagram page, it says she's a Talent/Brand Manager at Mixed Image Media and Woods Marketing Group. Just like Jenner's mom Kris, Elizabeth seems like such a proud momager.

2. She Has A Modeling Career

Woods signed to Wilhelmina International's Curve in 2015, and her career in the fashion world has only grown since. Speaking to Teen Vogue in December 2015, Woods talked about her goals and said,

Tying into the above, messages about body positivity can be found all over her Instagram and Twitter. Her message about "loving yourself and loving your body" is on-point. In the aforementioned Teen Vogue interview, Woods also said, "I’m just naturally a super curvy girl and I feel like my body will never be size 0. There’s so many people out there just like me."

4. Her Nails Are Always Flawless

One of the best things about Woods' Instagram account (which has over 11 million followers, by the way) is her manicures. Sure, there's plenty of other great content to scroll through, but when it comes to her fingertips, she's always nailing it.

According to Entertainment Tonight, Woods was a guest at Kim Kardashian and Kanye West's fairytale wedding in Italy in May 2014. This proves just how close she was with Jenner and the rest of the famous fam.

6. She Has Several Tattoos

Woods is no stranger to getting inked. In fact, her brother is a tattoo artist and the one responsible for some of her artwork that she's posted photos to on her Instagram, including the above roman numeral neck tattoo from December of 2015. As she wrote in the caption, "Just landed in LA and decided to go get tatted by my brother @jwoodzart... Wouldn't want anyone else to do this one for me. 23 forever."

7. She's Friends With The Smiths

Woods and Jenner are both friends with the Smith kids, Willow and Jaden. Jaden even took over her Instagram to post about their friendship, as seen above. Not only is she close with them, but she refers to Will Smith as an uncle. Their connection traces back to her late father, who worked on Fresh Prince of Bel-Air with Will as a sound engineer.

In fact, they're so close that Jada Pinkett Smith invited Woods on Red Table Talk to break her silence on the Tristan Thompson rumors, and helped kickstart the post-Kardashian phase of her career.

This article was originally published on Feb. 3, 2016