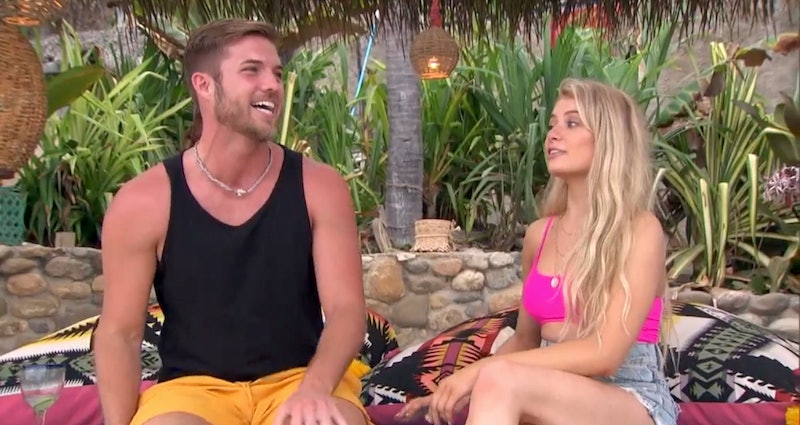 Whether you loved them or hated them on their seasons of The Bachelorette and The Bachelor, there's no denying that Jordan and Demi were born to shine on Bachelor in Paradise. They combined forces during the fourth episode and Demi and Jordan's Bachelor in Paradise commentary was the comedic highlight of Season 6 so far. This self-proclaimed dynamic duo lightened the tense mood of Paradise significantly when they offered their thoughts on other contestants Clay, Cam, Chris, Katie, and Kristina. These pseudo-villains of Bachelor Nation were full of teasing remarks, but responses to Demi and Jordon's chat show that it was all in good fun.

Both Jordan and Demi made names for themselves as huge personalities in Bach Nation, so it was only a matter of time before these blondies would unite for TV comedy gold. Perched on one of the daybeds, Demi and Jordan gave analysis on Bachelor in Paradise contestants as they walked by on the beach. Kristina and Katie had it relatively easy since Jordan just mocked them for looking like models in a Forever 21 commercial. But Clay got called out for lacking swagger with his white shoes. And Cam's sad walk and "Always Be Cam" catchphrase made him an easy target when they proclaimed "Anyone But Cam" would be receiving a rose. And Chris got called out for (what else?) being an old man.

Jordan and Demi knew exactly what they were doing with their routine — and thankfully, it seems that everyone else was in on the joke too. Demi tweeted as the Aug. 13 episode aired that they let their fellow beach bums know what they said about them on camera after the fact, so no one should have been blindsided by their mockery while watching the episode. "The roast was in good fun and we told everyone what we said about them right after! We never meant to be rude, we just have a brutal sense of humor (you should hear how bad I roast myself). I love everyone on that beach!" Demi wrote.

By the grin on his face, it looks like Chris knew that Demi and Jordan were talking playful smack on him when he strolled down the beach. Plus, he jokes about his veteran status by using a walker in his Bachelor in Paradise intro. For the record, although he has been on nearly too many Bachelor shows to count, Chris is only 32. So he had a great sense of humor about the situation in his Instagram Story when he wrote, "I was 102 when I walked on the beach so if I'm 90 to you ... I'm aging fantastically." (But be careful, Chris, since Demi did say you "age 10 years as every hour goes by.")

While Clay seemed less aware of what Jordan and Demi were up to, he also took the situation in stride with those supportive white shoes of his. He wrote in his Instagram Story, "Sorry Mama taught me humility and not swag." And he made sure that his comment was clearly full of love for Demi and Jordan when he addressed Demi by writing "ILY" complete with the heart-eye emoji.

Cam didn't address what Demi and Jordan said about him directly on his social media. But he has been making fun of how dejected he has been on the show on both Twitter and Instagram. So he hopefully wasn't hurt by Demi and Jordan's commentary either since he's fairly aware that his natural habitat on Paradise is "walking alone and sad."

Besides the people who were in Jordan and Demi's crossfire being cool with their banter, fans absolutely ate it up. The response was so strong that ABC's senior vice president of alternative series, specials, and late-night programming Robert Mills joked on Twitter that he'd be interested in a Demi and Jordan show if they pitched him.

While there will be plenty of more heartbreak and drama to come, Jordan and Demi used their powers for good to make Bachelor in Paradise a lighthearted palace of sass for one brief moment. So even if Jordan has to leave Paradise after his impending fight with Christian, that might not be the last fans see of him if the Bachelor franchise adds The Demi and Jordan Show to their lineup.