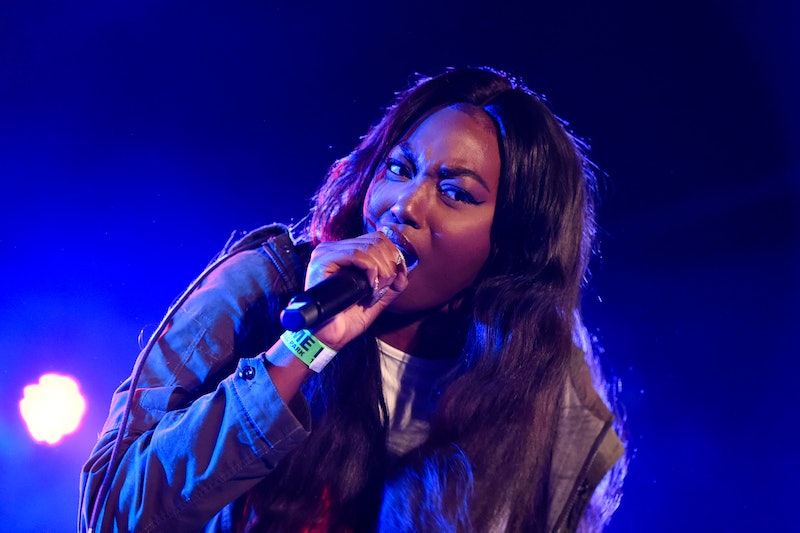 With the 2019 BRIT Awards just around the corner, I've been reminiscing about some of my favourite past performances at the BRITs. When I think about it, most of them have been unlikely collaborations. Like that time Björk and PJ Harvey teamed up at the 1994 awards for a cover of the Rolling Stones' "I Can't Get No Satisfaction," or more recently in 2009, when Dizzee Rascal and Florence & The Machine came together for a version of Candi Staton's "You've Got The Love." This year, Little Mix and Ms Banks are joining forces. So for the uninitiated, who is Ms Banks?

Little Mix is likely to be a name you're already familiar with, but Ms Banks is a bit newer to the scene. While Nicki Minaj was originally tipped to collaborate with Little Mix for a one off performance at the Brits, according to Metro.co.uk, Banks exclusively told the site that the group "were looking for another performer because Nicki Minaj wasn’t able to make it." DJ Semtex — the curator of super popular Spotify playlist Who We Be — reportedly referred Ms Banks to Little Mix's team, telling them, “Ms Banks is the one, she could kill it, she can give them the voice they’re trying to bring – and Nicki likes her,” as the rapper herself told the site.

Banks has since been confirmed, so here's what you need to know about her. Banks is from South London — Camberwell to be specific — and her first name is actually Tyra, which the Guardian reports that she doesn't use "for obvious reasons." She first came through when she did an epic freestyle for BBC1 Extra's regular "Fire In The Booth" segment back in April, 2016, which in my opinion is one of the best performances the booth has ever seen.

She's been steadily climbing the ranks since then, and she even got an extra boost when none other than Nicki Minaj tweeted some of the lyrics from Banks' verse on her collab with Lisa Mercedez and Stylo G, on Nov. 5, 2017. "How can I wake up to Nicki Minaj quoting my lyrics on twitter !??? NICKI F****** MINAJ !!! IM SCREAMING," Ms Banks tweeted in response.

She's since teased a collab with the Starships singer in a clip posted by Bang Showbiz on Monday, Feb. 18. "You can expect a collab with me and Nicki Minaj," she promises in the clip, adding: "The Barbz [Minaj fans] are always running me down and asking me questions but I am always working, something will be coming soon." You'll just have to take her word for it.

Whenever that collab does come, it's set to be pretty special. As Banks told NME on Nov. 14, 2017, she's been listening to Minaj "since I was 14 – a good nine years now – and she’s still very much relevant now, she’s had so many Billboard entries and done so much iconic stuff.”

Among her other influences, she cites some more of the icons, including "Ms Dynamite, Estelle, Lauren Hill, Lil’ Kim, Foxy Brown,” as she also told NME. But as you'll see on Wednesday, Feb. 20, when Banks takes to the stage alongside Little Mix, she's in a league of her own.