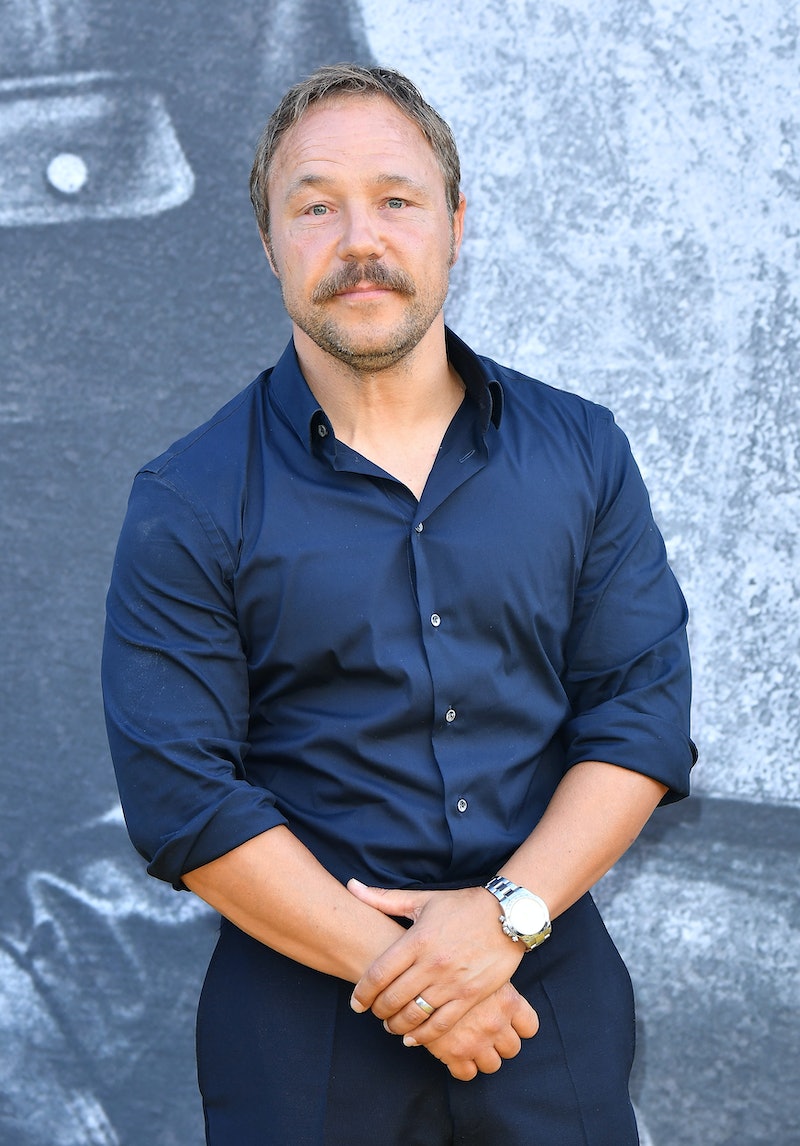 You haven't really had much of a look at Stephen Graham, the actor who plays the balaclava-clad villain in season five of Line of Duty, yet. However, once you do get to see that face, you're bound to recognise it from quite a few places. While the show has promised that Graham's character will go down as the most dangerous in its already grizzly history, the actor is — thank goodness — a lot difference offscreen. So, who is Stephen Graham? The Line of Duty actor is basically considered a legend in the British TV world, which might be why his performance as John Corbett is extra haunting.

With season 5 of Jed Mercurio's Line of Duty set to kick off on BBC One, viewers have been psyched ever since it was announced that Graham would be starring as the guest lead in season five of Line of Duty back in October 2018. The season regulars were also super excited about having him on board, including Martin Compston who plays Steve Arnott on the show, as he told the BBC: "It’s an absolute joy to be working with Stephen Graham again - someone I’ve always looked up to as an actor. He’s a brilliant addition to the Line Of Duty team. It’s gonna be explosive!” Was that a hint at things to come there, Compston?

Vicky McClure, who plays Kate Fleming on the show, had even more to be excited about, as she gushed to the programmer: "I’m over the moon Stephen is on board, he’s a good friend and one of the finest actors." That friendship might be down to the fact that it's certainly not the first time that McClure's acted alongside Graham.

While they looked a lot different back in those days, McClure and Graham appeared alongside one another in the This is England films and TV series. Graham played Combo, the skinhead antagonist of the show, while McClure played Lol, who happened to have a pretty ugly love affair with Graham's character.

The pair reunited again when they starred in BBC's political thriller The Secret Agent back in 2015. Besides his appearances alongside McClure, Graham has an extensive filmography under his belt, having appeared in everything from Pirates of the Caribbean to Tinker, Tailor, Soldier Spy, according to his IMDB page.

When not in front of the camera, you'll probably find Graham out and about with his pooches, as per his Twitter, or at home with his two children and wife Hannah Walters, who he referred to as "his best mate... and his fiercest critic," in an interview with the Leicester Mercury back in October, 2018.

As the Guardian reports, the actor grew up in Kirkby, Liverpool, and as a 10-year-old he joined Liverpool's Everyman Youth Theatre after appearing in a school production of Treasure Island. Growing up in Liverpool, he told the newspaper he was the victim of racist bullying due to his Jamaican ancestry. His mother encouraged him to confront the perpetrators, he told the newspaper:

"She knocked on the door of this woman's house and said, 'Get your son out now; them two are going to fight in the garden, then it's all over with.' And I'm like, 'Mum!' And all of a sudden I felt 10ft tall. I went into the garden and I battered him, I beat him in the fight, and mum went, 'Right, next one.' But they didn't want to fight at the next house, and it stopped when I went into school the next day. I'm small but me ma's about 2ft 2in. She filled me with all this courage to stand up for myself."

With all the credentials to back him up, you can look forward to seeing the extremely fine Graham joining an already fine cast, when the fifth season of Line of Duty premieres on BBC One at 9 p.m. on Sunday, March 31. Don't say I didn't warn you. Graham might just well be playing the most nefarious villain that TV has seen for quite a while.