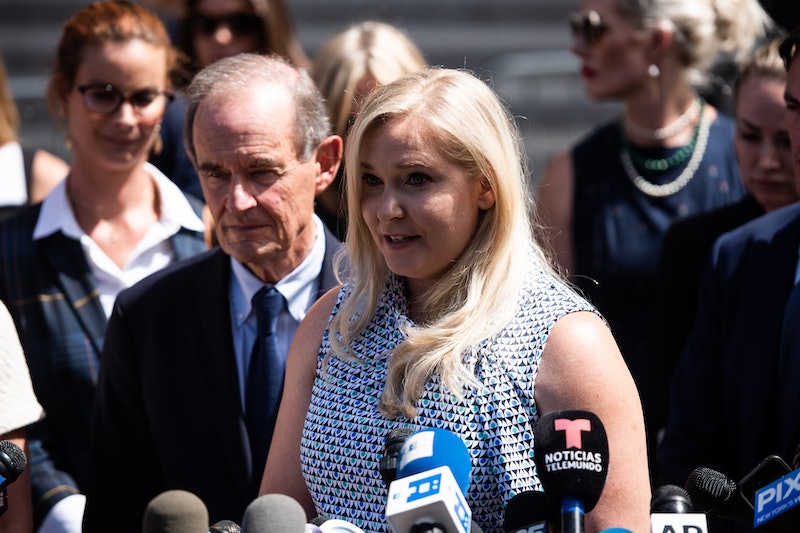 Prince Andrew's "car crash" interview with Newsnight's Emily Maitlis will be followed up by a special Panorama investigation into his friendship with convicted paedophile and alleged sex trafficker Jeffrey Epstein. The Prince and the Epstein Scandal features the first televised British interview with one of Epstein's alleged victims: Virginia Giuffre.

Previously known as Virginia Roberts, Giuffre claims she was forced to have sex with Prince Andrew on three separate occasions, per the Independent. She says two of those times occurred when she was underage. The royal has denied all allegations.

In a previous interview with NBC, Giuffre said she came into Epstein's life through his friend Ghislaine Maxwell, reports the BBC. She said Maxwell found her while Giuffre was working in the locker room at Donald Trump's Florida-based resort, later allegedly trafficking her to Prince Andrew.

"The first time in London, I was so young. Ghislaine woke me up in the morning and said, 'You're gonna meet a prince today.' I didn't know at that point that I was going to be trafficked to that prince," Giuffre told Dateline.

She claims her first sexual encounter with the royal happened in 2001 when she was just 17. According to Giuffre, Prince Andrew gave her alcohol in the VIP section of London's Tramp nightclub. She went back to Maxwell's house and was allegedly told by Maxwell that Prince Andrew was coming back too "and I want you to do for him what you do for Epstein." The second and third encounter is said to have taken place in New York and on Epstein's private island. (Maxwell has denied all claims, per the Guardian.)

A trailer for the Panorama episode shows Giuffre, now 35, referring to Prince Andrew, stating: “He knows what happened. I know what happened. And there is only one of us telling the truth.”

When asked about Giuffre's claims by Maitlis, Sky News reports the 59-year-old royal said he went to Pizza Express in Woking with his daughter, Princess Beatrice, on the day of the alleged 2001 encounter. He also refuted Giuffre's claims that he was sweating in Tramp club, saying that at the time he had a medical condition that stopped him from sweating which he recovered from recently.

To each of the claims, he replied: "It didn't happen. I can absolutely categorically tell you it never happened." He also could not recall ever meeting Giuffre, per the Independent, and had "absolutely no memory" of a photo allegedly of the pair of them inside Maxwell's house, per the BBC.

Giuffre's claims relating Prince Andrew were first documented in Florida court papers, but were struck from the record in 2015, notes the Independent, after a judge labelled them "immaterial and impertinent." Since the Newsnight interview aired, Prince Andrew has stepped back from public royal duties and has resigned from numerous patronages, reports the Evening Standard. Several organisations have also cut ties with the royal.

Giuffre is one of a number of women accusing Epstein of abuse, per CNN. Epstein died by suicide in a prison cell in August, the BBC reports, while awaiting trial for sex trafficking charges.

More like this
This Is When Netflix Is Going To Start Charging You For Sharing Passwords
By Darshita Goyal
Twitter Simply Couldn’t Cope With The ‘Happy Valley’ Finale
By Sophie McEvoy
Alan Carr's 'Changing Ends' Is A Witty Sitcom Based On His Own Life
By Darshita Goyal
Twitter Is Burning As Phoebe Dynevor Reveals Daphne’s 'Bridgerton' Exit
By Sophie McEvoy
Get The Very Best Of Bustle/UK
Sign up for Bustle UK's twice-weekly newsletter, featuring the latest must-watch TV, moving personal stories, and expert advice on the hottest viral buys.