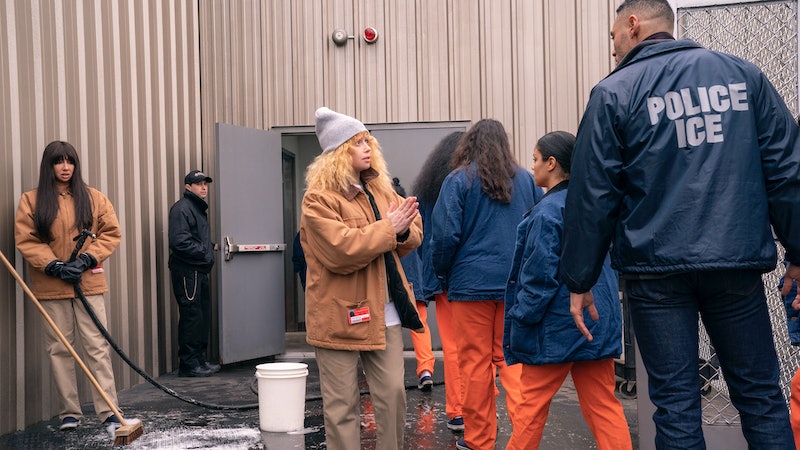 Spoilers ahead for Orange Is The New Black Season 7. Orange Is The New Black has always aimed to humanize the women of Litchfield Penitentiary: no matter their past transgressions, no one on the show is beyond redemption. That is, except, for some of the guards, who range from ineffective to actively sadistic. Carlos Litvack, who is played by Adam Lindo and introduced in Season 7, falls somewhere in between those two extremes. He may not be as abrasive as C.O.s like Piscatella or Hellman, but as an ICE officer, he has little regard for what happens to the women he's overseeing — even if that means they're deported and permanently separated from their families.

Litchfield Prison has changed a lot since Orange Is The New Black premiered in 2012. The minimum security facility that served as the main setting for the show from Seasons 1 through 5 has been closed down following the Litchfield riot, and has now been turned into an ICE detention center. We knew from Season 6 that Blanca would be there, since we saw her being dragged away by ICE officers, but Maritza is just as surprised as viewers to find herself in the detention center after she's caught breaking parole at a club, and without her ID (even though, as she eventually learns, she's not actually an American citizen). Under the supervision of Litvack, a man who seems to truly believe in what he's doing, hope seems pretty much lost for Maritza and the other detainees who find themselves at the center formerly known as Litchfield.

As for Lindo, playing Litvak marks one of his most prominent roles yet, having previously appeared as background characters such as "Officer" in Unbreakable Kimmy Schmidt and "Burly Goon" in Blindspot. Prior to Orange Is The New Black, Lindo's biggest part was as Detective Antoni Ortiz on the independently produced series Blue City; appearing in a major Netflix series is obviously a huge get, and will allow him the opportunity to dig deep into the character in a way he likely wasn't able to as a background actor.

Leading up to the season, Lindo was vague about what the role would entail, but told Soap Opera News "he's an interesting character" who will help to "really highlight a lot of things that are going on in our world today that need to be addressed when it comes to other human beings."

Of course, Lindo also has the unique challenge of being introduced in the final season of a show that has cultivated dozens of memorable characters throughout its run. But even in a few episodes, Litvak manages to leave an impression as the face of one of the most talked about and controversial government agencies in the U.S. right now. And being even a small part of Orange Is The New Black's legacy should count as a win.

More like this
You Might Want To Rewatch This Key 'On My Block' Scene To Understand 'Freeridge'
By Grace Wehniainen
A 'Terminal List' Sequel & Spinoff Are Reportedly In The Works
By Kadin Burnett and Grace Wehniainen
The 'Freeridge' Cast Shared Their Hopes For A Potential Season 2
By Grace Wehniainen
This 'One Tree Hill' Wardrobe Error Is Going Viral On TikTok
By Brad Witter
Get Even More From Bustle — Sign Up For The Newsletter
From hair trends to relationship advice, our daily newsletter has everything you need to sound like a person who’s on TikTok, even if you aren’t.