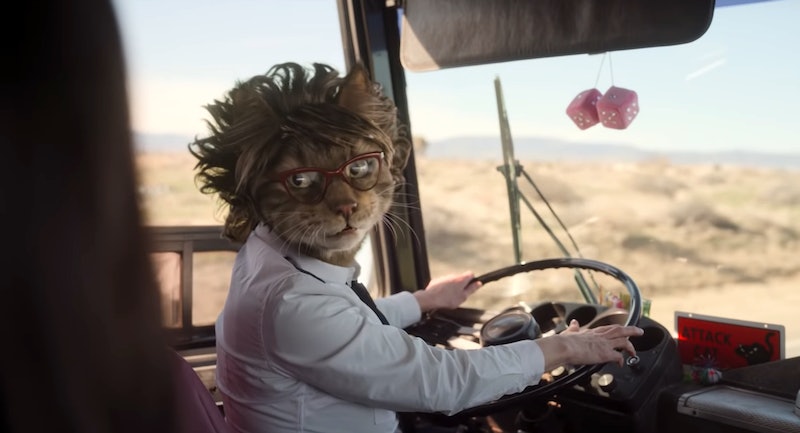 Spoilers ahead for Dollface. When a woman faces a breakup and contemplates the prospect of being single forever, a common stereotype is that she'll become a sad, lonely "cat lady." But Dollface shows being a cat lady isn't all that bad. A quite literal Cat Lady in Dollface guides Kat Dennings' Jules after her boyfriend of five years suddenly breaks up with her. While most of the time her face is that of an actual cat, Beth Grant plays this magical chaperone who helps Jules become the woman she wants to be — boyfriend or not.

Elements of magical realism are sprinkled throughout Dollface and most of them involve the Cat Lady. She pops up as a bus driver, a game show host for a game of "Should She Go Out?" that will be highly relatable for anyone with social anxiety, and a cat therapist who facilitates discussions between Jules and her cat Turtle. Through it all, the Cat Lady encourages Jules to reconnect with her female friends, whom she had ditched while dating Jeremy. It takes some adjusting for Jules to feel comfortable entering the world of female friendships again, but she soon realizes her relationships with pals Madison (Brenda Song), Stella (Shay Mitchell), and Izzy (Esther Povitsky) are the most meaningful ones in her life.

When Jules seems to be straying off course in the Season 1 finale after a falling out with Madison, the Cat Lady loses her cat face and appears as Grant. Jules wasn't being true the person she has now become — a woman recognizes the value and importance of her friends. To help snap her back, the Cat Lady calls Jules "dollface." Outraged at this term of endearment her ex used to call her, Jules is inspired to speak up and defend Madison at Jeremy's sister's wedding before riding off with her three best friends — and the Cat Lady along for the ride.

Grant has some experience working in magical realism as she appeared in a number of Bryan Fuller shows, like Pushing Daisies. And while you wouldn't necessarily say she was a support system to Mindy Kaling's Mindy Lahiri, she did hang out with strong-minded female millennials before in The Mindy Project as Beverly. But Grant has been a character actor for decades and her extensive résumé goes beyond projects that are similar to Dollface.

In a conversation with The A.V. Club, Grant outlined some of her most memorable performances. They include her involvement in Rain Man, No Country for Old Men, and The Artist — all winners of Best Picture at the Oscars. She memorably was Dwight's "babysitter" on The Office. She's also been in To Wong Foo, Thanks For Everything! Julie Newmar, Speed, Little Miss Sunshine, and Donnie Darko — where she played Kitty Farmer, a character appropriately-named for her future role as the Cat Lady. Offscreen, she has been working alongside her daughter with Viola Davis' production company on a virtual reality version of Othello where Iago is played by a woman.

Grant discussed with The A.V. Club how she was a second-wave feminist in the '70s who once literally burned her bra. She said that working with someone like Kaling was a dream for her since she's a self-actualized young woman who does it all.

So the themes of Dollface are particularly meaningful to Grant as a feminist. She also spoke to The A.V. Club about how important it is for her to work with women in the industry. "Working with women is so unique and so special," Grant said, before sharing an anecdote about how working on Dollface with Dennings allowed her to be free in her performance.

Grant's Cat Lady says in the first episode of Dollface, "Women need each other more now than ever." As her epic acting career continues, Grant seems poised to continue lifting up her fellow females on screen and off.