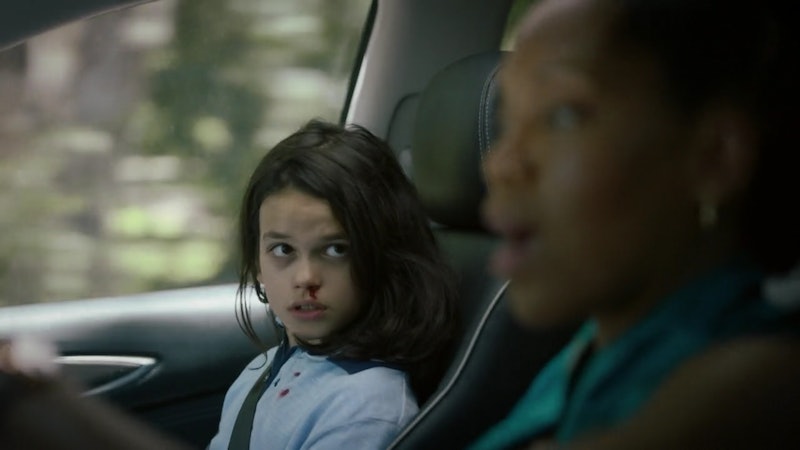 Spoilers ahead for Watchmen, Episode 1. The first time we see Topher, played by Dylan Schombing, onscreen in the first episode HBO's Watchmen, he's tackling a school classmate who makes a racist comment towards a guest speaker, who just so happens to be his mother, Angela Abar, codenamed Sister Night (Regina King). Topher immediately shows himself to be a brave boy who stands up for what he believes in, but it's unclear how much of a role he'll play in the action moving forward.

Though he's only 12 years old, Schombing is no stranger to TV. The son of actor Jason Schombing, who starred in the 2009 film version of Watchmen, Dylan's first small screen role came in 2015, when he played Hugo in The Slap, based on the best-selling novel by Christos Tsiolkas. Since then, he's had recurring roles in shows including Dirk Gently's Holistic Detective Agency, Girlfriends' Guide to Divorce, Sharp Objects and Gigantosaurus. This year, he's providing the voice of Whiz in the Pup Academy animated series.

In between his TV projects, Schombing has also appeared in several films. He played Young Milo in Pompeii in 2014, when he was only seven years old, and also had a minor role in Warcraft: The Beginning in 2016.

Given that his IMDB page lists Schombing as appearing in all nine episodes of Watchmen Season 1, it seems likely that we'll be seeing way more of Topher. After all, there's a war coming, and it's pretty much right on his doorstep after Angela finds Judd hanging from a tree on her property. The Seventh Kalvary isn't likely to slow down their racist attacks soon, and that could put Topher in harm's way.

From what little we've seen of the character so far, Topher doesn't seem like he would err on the side of caution when it comes to fighting the bad guys. Though his mother would likely try to shield him from danger and keep him as far away from the fighting as possible, could Topher, despite his young age, emerge as a major figure in the deadly rift between the police and the Seventh Kalvary?

There's also the fact that Topher is white and Angela/Sister Night and his father Cal are black, so it's possible that we'll explore a bit more of the backstory of how their family came together. It's likely Topher and his sister were adopted after the White Night, when white supremacists attacked police officers in their homes three years prior to the events of Watchmen.

No matter what happens, viewers will certainly get to know Topher a lot more on Watchmen this season.

More like this
Pamela Anderson's Sons Brandon & Dylan Have Their Own Hollywood Careers
By Arya Roshanian
'Stranger Things' Finn Wolfhard Is “Proud” Of Noah Schnapp For Coming Out
By Sophie McEvoy
The Plane Crash In 'Dear Edward' Is Based On A 2010 Tragedy
By Grace Wehniainen
'That '90s Show' Is Officially Coming Back For Season 2
By Gretchen Smail and Grace Wehniainen
Get Even More From Bustle — Sign Up For The Newsletter
From hair trends to relationship advice, our daily newsletter has everything you need to sound like a person who’s on TikTok, even if you aren’t.