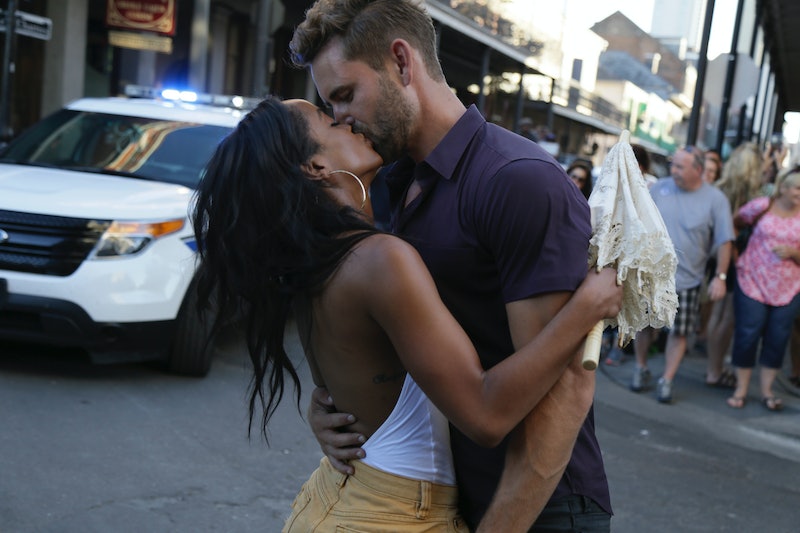 How are we already talking about hometown dates on Nick Viall’s season of The Bachelor? It seems like just yesterday shark girl was getting out of that limo claiming to be a dolphin (I miss you Alexis). Nick is down to six women and by the end of the episode he’ll be down to four. You know what that means? Nick is heading to meet four women’s families. Which Bachelor contestants will get hometown dates? Without spoilers, I’m going to break down who I think he should pick. That is presuming he decides to continue his journey after his major breakdown at the end of last week’s episode. Knowing him, he’ll get over it, possibly have sex with Corinne, and be ready for new one-on-one dates by the morning. Godspeed, Nick.

Last week was pretty intense for an episode of The Bachelor. Taylor attempted to tell Nick that Corinne was lying to him, and he really didn't care. He went on a date with Kristina, who proved that she’s the strongest woman in the world. Then he went on his second two-on-one date, which resulted in him sending both of the women home. All of that was topped off by Jasmine, who I imagine had too much to drink, going off on a rant about how she deserves better and by better, she meant a one-on-one date. Nick quickly sent her home. By the end of the episode Nick couldn't deal with anything and essentially told the girls he was over the whole process. What a cliffhanger, right?

Assuming he gets over this and back into the show, I believe these are the four women he should choose for hometown dates.

We’re all in agreement that Rachel the attorney is super badass and amazing, right? I was already pretty sure she was going to make it far and then her New Orleans date with Nick pretty much confirmed it. If we’ve learned anything from Nick’s prior three seasons, it’s that he’s attracted to very strong, independent women and Rachel is exactly that. She’s got her life together and is ready to settle down. I predict she’s definitely getting a hometown rose.

I thought her date with Nick was awesome, but what really sealed the deal for me was her willingness to call Nick out on his issues and the Corinne situation. Nick needs someone that will challenge him. Plus, Vanessa is super pretty, helps kids, and speaks three languages. I would say she’s a major catch. Not to mention, we know Nick has a thing for Canadian ladies.

The super sweet neonatal nurse? I mean I feel like I don’t have to elaborate too much more than that. They had a romantic first date (the first one-on-one of the season!) and she’s absolutely stunning. She has a tragic romantic history, and is trying to find someone to spend her life with. She deserves a rose and a trip home to where she grew up.

Okay, hear me out. WE NEED TO MEET RAQUEL! I really need to see what happens in Corinne’s daily life and meet her parents to understand what the heck is happening there. I want to know more about this multi-million dollar company. I want to watch Nick eat cheese pasta. I have so many thoughts and feelings about this and I think you do too. As long as he takes the other three home too, I’m totally okay with Corinne staying another episode.

Side note: I didn’t put Kristina on this list because I firmly believe she will find love outside the show with someone who isn't Nick and who didn't make her wait a bunch of weeks for a one-on-one date, and I’m 95 percent sure he would agree with me on that one.

Whoever Nick does bring to hometowns, it's going to be dramatic, especially if Corinne is involved.