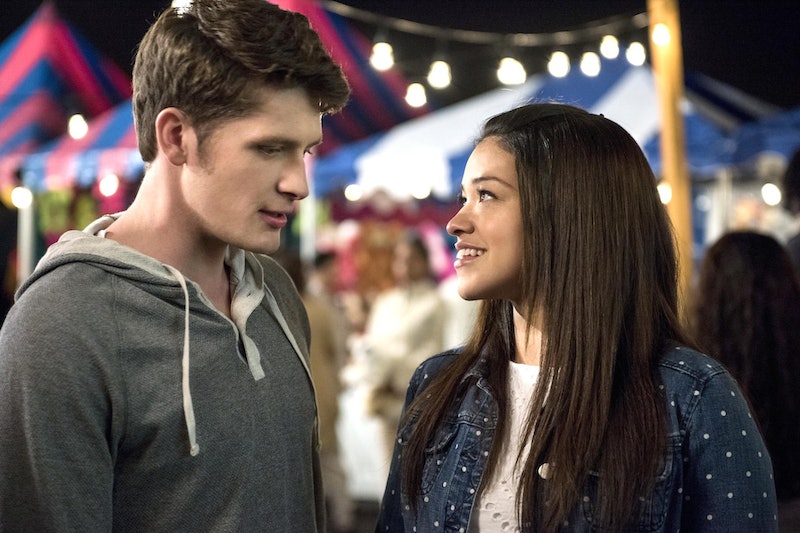 Jane The Heartbroken. If you haven't watched the most recent and shocking Jane The Virgin episode yet, turn back now. If you have, then let's console one another. The Season 3 episode "Chapter Fifty-Four" surprised fans by killing Michael and changing Jane's future forever. What may be even more shocking are the final moments of the episode, in which the show jumps ahead three years to show Jane at a wedding with a now walking and talking Mateo. Jane is looking at photos of her and Michael, and she's no longer wearing her wedding ring. The question of whose wedding she is attending goes unanswered, but there are a few possibilities that are worth exploring.

After being shot in the Season 2 finale and spending most of this season recuperating, Michael had finally carved out a future for himself. He had quit his desk job at the police department, which he hated, and had decided he was going to be a lawyer. After taking the LSATs, though, Michael suffers an aortic dissection caused by his gunshot wound. The narrator tells us in this season's premiere, after Michael is shot and it looks like he isn't going to make it, that "for as long as Michael lived, until he drew his very last breath," he would love Jane.

Well, that he did, but, despite the ominous foreshadowing, it isn't easy to watch Jane hear the news of her husband's unexpected passing. That being said there is other moments that looking back at this season could foreshadow whose nuptials Jane is attending.

Knowing that the episode before this is focused on how much Jane doesn't like Bruce, her mom's on-and-off again boyfriend, it could be that Xiomara's wedding that Jane is headed to. Jane has watched Xo cry over Bruce and watch Beaches more times that she can count, but Jane is trying to move forward and accept her mom's choices. She is also trying to accept the fact that, despite her mom's relationship with Bruce starting out as an affair, the two are different now, and they deserve a chance for happiness. Xo even warns Abuela that they could be moving in together sooner.

Going to her mom's wedding would feel full circle for Jane. She is growing up and letting go, which isn't easy. Watching her mom get married, even three years after losing Michael, would be a major adjustment. But, after Michael dies, Jane's life will be full of major adjustments. There's something hopeful about Xo being the one getting married. While Jane didn't get the happy ending she thought she would, Xo gets a chance for one after years of ups and downs.

Of course, her mom wasn't the only one whose been figuring out her love life. Rogelio has just realized he has major feelings for Darcy, the matchmaker he plans on having a baby with. "Love is a gamble," Darcy tells Xo in "Chapter Fifty-Three," before the two try to give love a chance and end up getting into a very public fight about Rogelio's penis. (It has to do with an indie movie cutting his big scene out.) Rogelio, though, ends up wanting to make amends, even agreeing to a reality show with Darcy. Is that a sign that these two are ready for a real commitment down the line?

Being the telenovela it is, there is a good possibility that Rafael is the one getting married, forming a brand new Jane The Virgin love triangle. He was last seen with Jane's cousin Catalina, who has a lot of trouble telling the truth, but she had left. It's possible, though, that Catalina returned to work things out, which would complicate things for Jane.

And never count out the fact that Rafael could end back up with Petra. She's agreed to take things over if Rafael ends up going to jail for nine months. This could definitely bring the two closer together — maybe even close enough to give marriage another shot.

What we also need to remember is that, just like Michael's surprising end, we may be surprised to find out who's walking down the aisle. Jane The Virgin is always keeping us on our toes. Maybe Luisa is getting married to her new love. Who just so happens to be Rose in disguise. So that would be very bad. But, hey, it could happen.

What we can guess, though, is that whoever is getting married is going to have an affect on Jane's life. Showrunner Jennie Snyder Urman said that the wedding shows "that life moves on, that there's light and happiness and heart." The world didn't stop after Michael died, and neither did Jane. This may not be what she expected, but you can't prepare for things like this. The rest of this season gives fans a chance to see a new side of Jane: a single mom who is looking to start over.