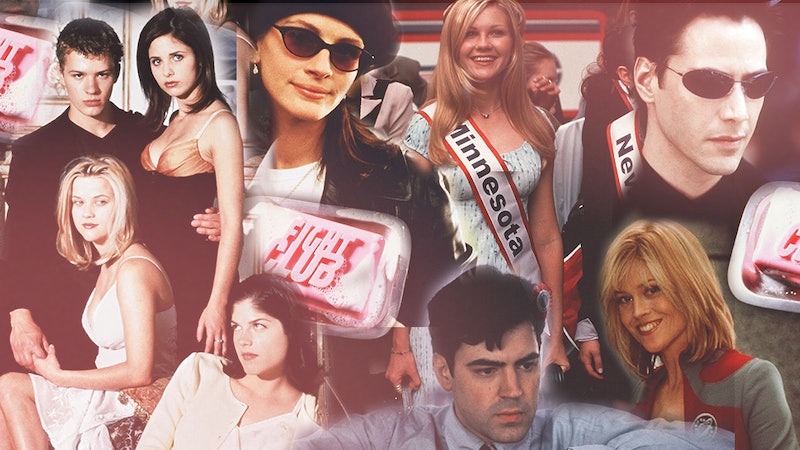 In March of 1999, Americans saw the impossible: a man on a rooftop leaning back until his body was parallel to the ground, dodging bullets in slow motion as they tore towards him. The air itself rippled as they passed.

The never-before-seen effect, dubbed “Bullet Time,” required over a hundred cameras, each shooting a fraction of a second apart in order give the illusion of three-dimensions and time standing still on screen. All over the country, audiences echoed back the movie’s most famous line: “Whoa.”

They would not make that movie now unless it had a singing lemur narrating it.

As endlessly imitated and parodied as the bullet-dodging scene from The Matrix was, it was only one of the most iconic movie moments of 1999, a year that hindsight has recognized as an entertainment miracle, a once-in-a-generation moment when indie films, romantic comedies, high school flicks, and industry-redefining mega-blockbusters all crested within the same 12 months. Even in the era of laptop viewing, as we marathon-watch our way through our 30s, we’re still asking: What made the movies of 1999 so good?

It was the year audiences met Tyler Durden, the bloodied, six-packed antihero of David Fincher’s stylish anti-capitalist send-up, telling a basement full of men that the first rule of Fight Club is not to talk about Fight Club. The Blair Witch Project’s Heather held a camera up to her face, whispering apologies as her eyes filled with tears and fear. Julia Roberts was a girl standing in front of a boy, asking him to love her.

Critics noticed at the time that they were in a rare halcyon year. “Someday, 1999 will be etched on a microchip as the first real year of 21st century filmmaking,” Jeff Gordinier wrote in Entertainment Weekly that November, not realizing that “21st century filmmaking” would mostly entail made-for-streaming, prestige TV.

The year 1999 not only gave audiences top-tier popcorn blockbusters such as The Mummy and Toy Story 2, but also a bevy of small and brilliant films that were strange and entirely original — Being John Malkovich, Magnolia, Go, Election, The Virgin Suicides, and Brad Bird’s masterpiece, The Iron Giant.

“If you were to drive onto the Warner Brothers lot today with the Three Kings or The Matrix script, you'd probably get thrown out,” says Brian Raftery, author of Best. Movie. Year. Ever: How 1999 Blew Up the Big Screen. “Because they're expensive, novel ideas that don't have a franchise attached to them. A movie like [1999 Best Picture nominee] The Insider is not going to have a sequel. It was made by Disney! Which is crazy. They would not make that movie now unless it had a singing lemur narrating it.”

Of the 10 highest-grossing movies of 1999, six were entirely original properties. Of the top 10 of 2019 so far, only one — Jordan Peele’s horror movie, Us — isn’t a sequel or part of a franchise.

"It’s like 1939,” Election director Alexander Payne told Gordinier in 1999, comparing it to the year Hollywood gave us The Wizard of Oz, Mr. Smith Goes to Washington, and Gone with the Wind. "There’s a bumper crop of movies that, even if they’re not perfect, are interesting and intelligent.”

It happened like this: Since the early ‘90s, independent film had been gaining its footing as a major movie-making force. Then, as the decade wound down, studios gave unprecedented carte blanche to indie filmmakers to create unique projects, ignited by the powerhouse success of Tarantino’s Pulp Fiction in 1994. That’s how, in a single year, we got films from Guy Ritchie, the Wachowskis, Steven Soderbergh, Spike Jonze and Charlie Kaufman, M. Night Shyamalan, P.T. Anderson, Stanley Kubrick, Tim Burton, Sofia Coppola, Martin Scorcese, Ang Lee, Spike Lee, David O. Russell, and David Fincher.

“[Their movies] are all very ambitious, very dark, very morally ambiguous,” says David Sims, film critic for The Atlantic and co-host of the film podcast Blank Check with Griffin and David. “It's just so difficult to imagine Warner Brothers or Universal or Disney taking swings at those kinds of movies now. And then you look at the Oscars, and they sort of ignored all of those movies.” (Of films by the auteurs listed above, only Shyamalan’s The Sixth Sense was nominated for Best Picture.)

That’s not why we return to them. It’s because they’re the type of movie we may never have again.

The awards were less important to getting the films seen because of distribution vehicles that didn’t exist before or after. Movies that were largely ignored or underappreciated at the time (Drop Dead Gorgeous, anyone?) got a now-defunct shot at longevity that even Blockbuster Video couldn't offer: the confluence of online DVD rentals and still limited cable TV options.

“DVD was at its peak,” Raftery recalls. Both box office duds, Fight Club and Office Space are now considered cult classics thanks to the magic of home viewing. “I think Fight Club sold at least 13 or 14 million DVDs. And cable was a big way to break movies. So when Office Space started playing on Comedy Central, you didn't have 500 other channels and 25 streaming services to choose from. You're just going to watch Office Space again because it's on.” Movies that might ultimately have been forgotten became cultural touchstones for a whole generation who could quote them to each other because they’d never written a paper without 10 Things I Hate About You on in the background.

Nostalgia needs time to percolate, though, which is why we are now, in 2019, at peak 1999 appreciation. Finally, and right on time, the teens who obsessed over Cruel Intentions or Galaxy Quest have become the adults defining the cultural conversation, and using social media to broadcast and amplify their collective tastes.

There’s an illusion, promulgated by that meme of Ryan Phillippe’s Sebastian Valmont saying, “Email is for geeks and pedophiles,” that these movies stuck for the specificity of their ‘90s fashion, sets, humor, jargon, but that’s not why we return to them. It’s because they’re the type of movie we may never have again. The major themes of the movies of 1999 were largely apolitical and internal, discrete from current events in a way that film couldn’t be after the school shooting at Columbine High School on April 20, 1999, and after 9/11. (Trump-era entertainment is under similar pressure to engage in cultural commentary.) Sims points out that the films from ’99 are largely “not concerned with what's happening to the country — they're concerned with much more personal, much more small-scale things.”

The five teen movies from 1999 that are still part of the cultural conversation today — Varsity Blues, American Pie, She’s All That, 10 Things I Hate About You, and Cruel Intentions — all represent a time when a student’s biggest fear wasn't gun violence, but that someone was only bringing them to prom for a bet.

“They captured the end of that big, cheery decade — the economy is good, our global situation seems to be under control, and high school shootings are a rarity. There’s a vacuum-packed innocence about those teen movies,” says Raftery.

The last year or so has been particularly bleak for film lovers who miss movies that aren’t about superheroes. David Fincher hasn’t made a film since 2014’s Gone Girl. He, like Steven Soderbergh, Spike Lee, and the Wachowskis, have all made the leap to television projects. Martin Scorsese and the Coen brothers released their most recent films on Netflix.

Maybe TV is enough to sustain us. In another two decades, we might look back on 2019 as a golden era of subscription television that we were lucky to witness. But if some kids in 2039 happen to stumble upon a laser-brain-disc of The Iron Giant or Magnolia or The Talented Mr. Ripley, I bet they’ll be as entranced as we were in 1999, when those movies were new and represented everything we thought possible.