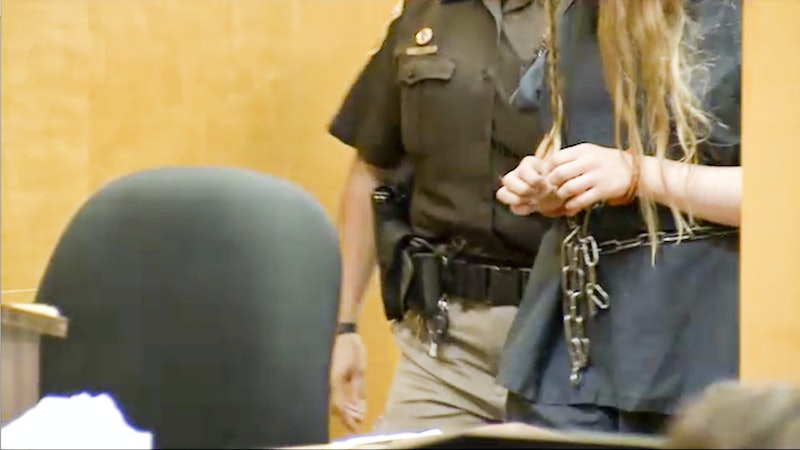 Like many horrific monsters throughout history, Slenderman preys on children. But the true terror of Slenderman – the tall, faceless, suited, fictional figure that was born of the internet and became a minor cultural phenomenon – doesn’t just stay within the realm of stories. In a chilling case detailed in HBO’s new documentary Beware The Slenderman, two 12-year old girls allegedly stabbed another child of the same age 19 times in what they claim was an attempt to appease the fictional character. The victim survived the attack and the girls who are seen confessing to the stabbing in the documentary, Anissa Weier and Morgan Geyser, are being charged as adults with attempted first-degree homicide. As reported by FOX, both have entered pleas of not guilty by reason of mental disease or defect.

It’s been almost three years since the attack, but the resulting trial has yet to come to a conclusion. Even before the HBO documentary was announced, Weier and Geyser’s story sent ripples throughout the media and the affected communities – both real life and digital. It has also raised a lot of questions about how justice should be delivered when such young children are accused of such a serious crime.

The attack occurred in Waukesha, Wisconsin, which has a big effect on how Weier and Geyser will be tried. As the Associated Press reported, “Anyone 10 or older charged with first-degree attempted homicide is automatically considered an adult under Wisconsin law.” The distinction between being tried as an adult is massive here, because if they’re found guilty as adults, Weier and Geyer could be imprisoned for as many as 65 years. If tried as juveniles, however, “they could be incarcerated for up to three years then supervised until age 18.” It’s the difference between being free at 18 and potentially being free at 79.

Ultimately, it was decided that Weier and Geyer would be tried as adults. As reported by the New York Daily News, their attorneys claimed that the Wisconsin law is unconstitutional and leads to "cruel and unusual punishment," but a county judge ruled to try them as adults in August 2015. A state appeals court upheld the decision in July 2016, according to NBC News. Though Weier and Geyer can still appeal the decision in the Wisconsin Supreme Court, according to the AP, neither girl's attorneys plan to continue trying to move the case to juvenile court.

One of the reasons why attorneys argued for Weier and Geyer to be tried as juveniles was their mental state during the attack. According to The Guardian, experts testified that one girl has has schizophrenia and an oppositional defiant disorder, while the other was diagnosed with a delusional disorder and schizotypy. Weier and Geyer have both pleaded not guilty due to mental disease and people found not guilty due to mental disease are usually committed to a mental hospital for treatment, according to the Milwaukee Journal-Sentinel.

However, some have argued against the girls being tried as adults for completely different reasons. Bridgette Dunlap wrote in Rolling Stone:

“Criminally prosecuting 12-year-olds as adults is unjustifiable. The basic justifications for incarcerating criminals – rehabilitation, incapacitation, deterrence, and retribution – apply differently to juveniles … Deterring someone who isn't in control of his or her actions or doesn’t recognize their consequences isn't really possible.”

The only thing everyone can seem to agree on is that the nature of the crime and the ages of those involved means it should be treated seriously and with sensitivity. There are no easy answers in this case, but at the very least, HBO’s Beware The Slenderman may be able to offer some insight about the attack and the complex trial that has followed.