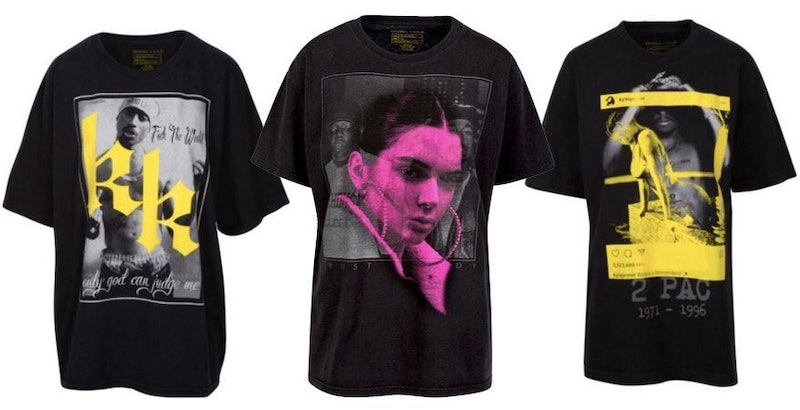 Another day, another Kendall and Kylie controversy. Or should I say kontroversy? Whatever you call it, Kendall and Kylie Jenner's Biggie and 2Pac tee shirts have officially been pulled from their website after coming under fire for cultural insensitivity.

The collection of $125 vintage-style tees showed the faces of Notorious B.I.G. (whose real name was Christopher Wallace) and Tupac Shakur with some sultry images of the sisters plastered across them, which many people have called disrespectful to the late rappers (as well as to the other music legends represented on the shirts, including Metallica, Kiss, The Doors, and Pink Floyd).

Christopher Wallace's mother Voletta Wallace weighed in on the controversy on Instagram, writing, "I am not sure who told @kyliejenner and @kendalljenner that they had the right to do this. The disrespect of these girls to not even reach out to me or anyone connected to the estate baffles me. I have no idea why they feel they can exploit the deaths of 2pac and my Son Christopher to sell a t-shirt. This is disrespectful, disgusting, and exploitation at its worst!" Wallace's estate's lawyer also issued a cease-and-desist letter to the Jenners, according to TMZ.

For what it's worth, after taking the shirts down, the Jenner sisters both posted an apology to Twitter.

The brand also issued a statement regarding the tee shirts.

"The KENDALL + KYLIE brand apologizes for any insensitivity," it reads. "When deciding to work with one-of-a-kind repurposed vintage tees, it was not the brand’s intent to offend anyone. These designs were randomly selected and not well thought out. The brand would like to apologize, especially to the artists that have been featured in the series. We did not mean to disrespect these icons and understand that we missed the mark completely. The designs have been removed. We sincerely apologize to the artists, their families and estates and anyone who may have been offended.”

This isn't the first time the Jenner sisters have been dragged for cultural insensitivity, though (see: that Pepsi ad, Kylie's camo collection), and Twitter is ablaze again calling them out, too. Here's what people are saying (and more looks at the shirts in question).

Some were straightforward in their disapproval.

And some were just plain mad.

Others were in disbelief.

While some seemed sort of shocked, sort of not.

This person questioned the graphic designers who made the tees (kind of).

And this person took a moment to enjoy Biggie's mom's schooling.

This Twitter user employed a simile to explain the situation.

Others wondered, where was Kanye during all of this?

This was pretty much the general sentiment, though.

More like this
How To Wear A Bucket Hat Like Rihanna, Dua Lipa, & More
By Allie Fasanella
Harry Styles’ Red Carpet Looks Have One Thing In Common
By El Hunt
Taylor Swift’s Latest ‘Midnights’ Look Went Heavy On The Glitz
By Allie Fasanella
Serena Williams Looked Like Royalty In A Bodycon Velvet Dress
By Allie Fasanella
Get Even More From Bustle — Sign Up For The Newsletter