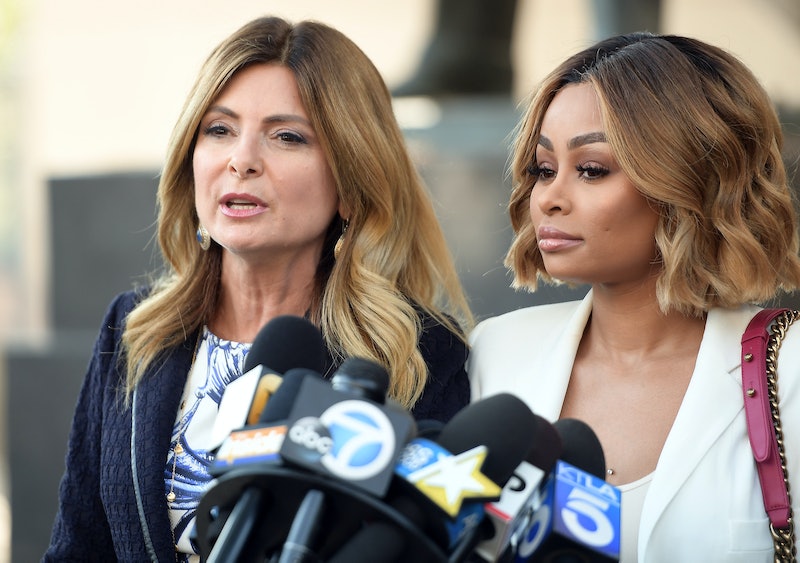 "I feel strongly that this is an important women’s rights issue because revenge porn victims are 90 percent female," Bloom says via phone shortly after the restraining order was granted. "This is something to do that’s done to shame women, to slut-shame women. We’ve already in our brief explained slut-shaming in our brief to the court, so the court will be fully apprised of the issue here, that this is something that can be very devastating for women and girls when explicit images of their bodies are posted, and that we have the right to choose at two different times which images of our body are going to be made public."

Bloom tells Bustle that filing for the restraining orders is the path she and Chyna are using for now, in the hopes that it will have enough of an affect on Kardashian that they do not need to sue him or go to the police. She notes that this is also the path that was taken with Barton: "I had a prior case where I won a victory for my client Mischa Barton, where somebody was trying to shop around sex pics of her, and we were able to immediately go in and get restraining orders and block that."

The lawyer made clear from the start that she viewed working with Chyna as being part of a larger issue. In a press release she shared on Friday, Bloom wrote, "Chyna and I both believe that this is an important women’s rights issue, as too many women and girls have been slut-shamed by exes."

Now, she says that she is pleased with the "total and complete victory" she and her client had in court on Monday morning, and adds that she supports other women fighting for their rights. "I encourage women and girls to stand up for their rights," she says. "You know, Chyna last week was very devastated and beaten down, and I think today she’s doing much better, she had a big smile on her face. It’s always scary to stand up for your rights, but when you do, you can win. And set a good example of a good precedent for everyone else."

As for Kardashian, he is being represented by Robert Shapiro, who appeared in court of his behalf. TMZ reported early Monday that Kardashian would not dispute Chyna's request for a restraining order. Shapiro also told TMZ that Kardashian's posts were "a spontaneous reaction that he regrets." After the order was granted, the lawyer told reporters (via People), “Now we move forward to do one thing and one thing only — whatever is in the best interest of the child.”