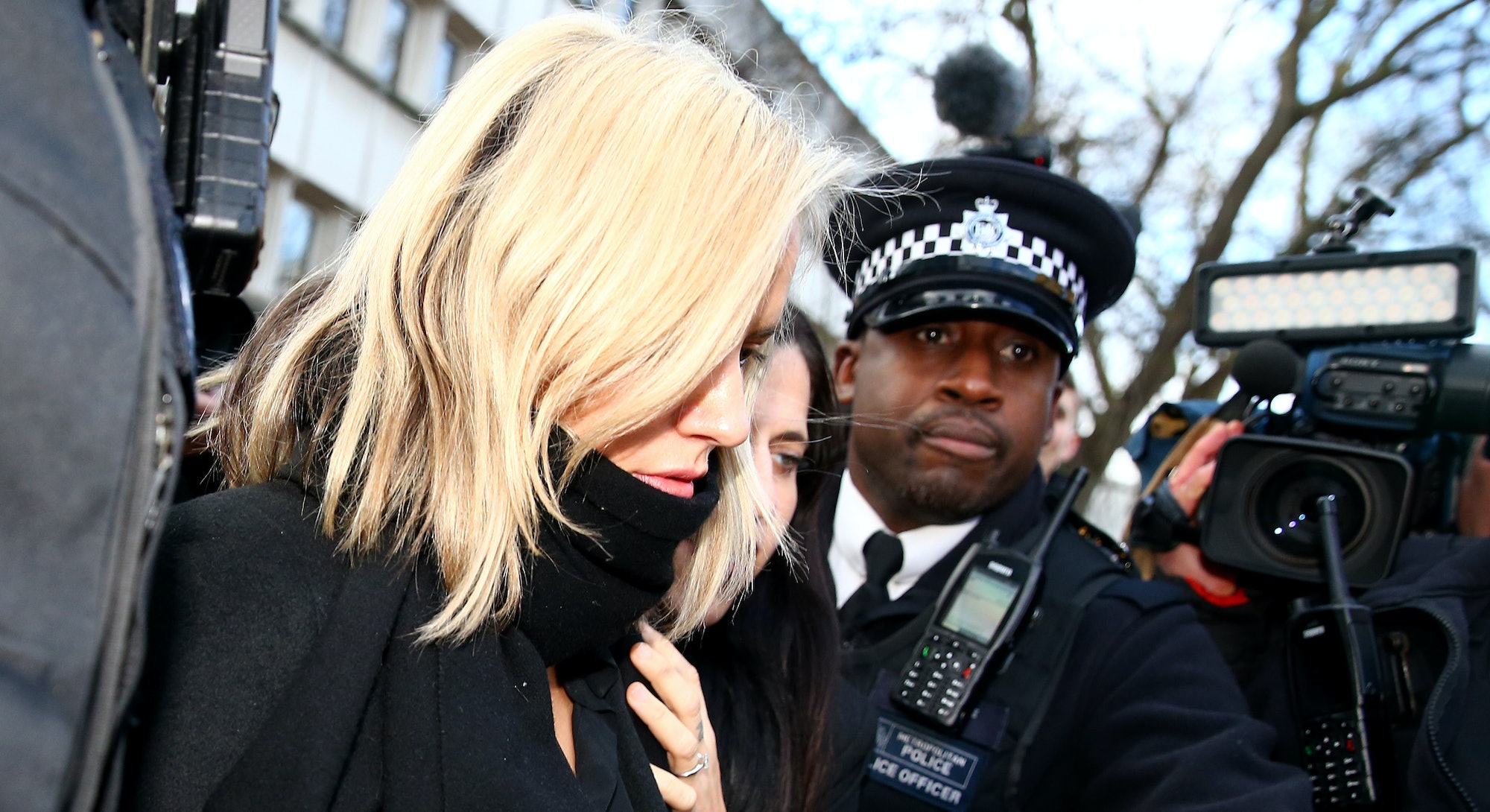 The news of Caroline Flack’s passing has caused many people to question the role of the media and ask why hypervisible women are being harassed at such an alarming rate. After Flack’s death, a petition arguing for the introduction of a Caroline’s Law, garnered over 800,000 signatures and was handed to the government on Tuesday, March 3. It calls for "a law that would make it a criminal offence, not dissimilar to Corporate Manslaughter, for the British media to knowingly and relentlessly hound people up to the point that they die.”

This is more than something affecting celebrities — it’s a reflection of the frequently toxic culture seen online and in society as a whole. Alongside calls for the press to take the mental health of those in the public eye more seriously, people also have questioned the role social media has in all of this and the responsibility of Love Island itself. In the days and weeks after Flack’s passing, there have been calls for Love Island to be cancelled, as it's now the fourth time a person with ties to the show has died by suicide. But will cancelling the show fix the mistreatment of women online, the dangerous nature of social media, or how we deal with mental health as a country?

The reality is that, for many women in the public eye, being hypervisible in media of all forms is an inescapable part of their job. Even for your average person, social media is practically everywhere, with around 39 million people in the UK using it out of a population of 67 million.

Those in the public eye especially can’t simply delete their social media. It's hard for famous women to escape online harassment even when they don't have their own accounts. Meghan Markle is the perfect example of someone who has received a terrifying amount of harassment from the media in recent years, despite not having personal social media accounts. A recent report by Online Casino on trolling showed that Markle is the third most trolled celebrity online, and Adele is the first, both coming before Donald Trump. Moreover, the same people in the media who have insulted and tormented Markle, are now the same people calling for action and accountability over Flack's death. It’s truly scary that the dots still aren’t being connected.

800,000 — the number of people to sign a petition calling for greater protections for celebrities from the press

Prince Harry put out a statement defending Markle against the press in 2016, the pair are both suing tabloid newspapers, and they stepped back from royal duties and left the country as a couple, yet the criticism and blame for these actions is almost always attributed to Markle. Case in point: The couple's decision to leave the royal family is being referred to by these publications as Megxit. We have to call it what it is — bullying.

From being criticised for holding her baby bump, to being shamed for wearing an off-the-shoulder dress, it seems Markle can’t do anything right. But the media is simply reflecting the racism in our country, you only have to look at the comments on Daily Mail articles or under posts on the Sussex Royal Instagram account to see that. If she, a literal princess who is famous, beautiful, mixed-race and therefore represents a more “palatable” face of blackness, is still getting abused, what chance do the rest of us have?

Markle and her sister-in-law Kate Middleton's treatment by the media is completely different. The fact that Markle was an actor, has previously been married, lived quite an independent life prior to marrying Harry and, more importantly, that she is of African-American heritage are all aspects of her identity that have earned her criticism ever since becoming a royal. In a study comparing press coverage of Middleton and Markle, the Guardian found that Markle receives twice as many negative headlines as positive, Over the same period, for Middleton, 45% of articles about her were positive in tone, 47% neutral and only 8% negative.

From 2018 to 2020, Meghan Markle received twice as many negative headlines as positive

Labour's Diane Abbott, the UK’s first black woman MP, receives the most harassment of any member of parliament on social media, and the hounding she is subject to is steeped in misogynoir. A study by the charity Amnesty International on women MPs being harassed online shows Abbott was the target of almost a third of all abusive tweets they analysed. The harassment she received centres on gender, race, and sexual violence. As Amnesty International put it, “The disproportionate amount of online abuse faced by BAME women MPs reflects a wider trend of 'intersectional discrimination'”

But when it comes to women, this treatment dates back to long before the rise of social media. Who can forget the singer, Amy Winehouse? Instead of giving her space and treating her with kindness as someone who is unwell and suffering from addiction should be — she became a joke, her face plastered on front pages. In some way, we were all to blame for her mistreatment. So how do people stand a chance now when cruel comments are just a click away?

We can’t solely blame the media. It remains a reflection of our society — often what is said online by your everyday user fuels the national media. Public interest is instrumental in making or breaking a person. We aren’t shouting into the abyss on Twitter, people can see our tweets, publications can read them, and so can the subjects of them.

Model and activist Munroe Bergdorf has also received a huge amount of abuse online. Transphobia, racism, and slut-shaming on social media have literally lost her work — work which could have changed lives. In 2019, she was set to be Childline's "first LGBT+ campaigner" but was abruptly dropped by NSPCC. She and many who criticised the decision said it was because of growing pressure from a transphobic backlash on Twitter. Her activism literally aims to help better the lives of LBGT+ people and specifically trans people, who often already have a lower life expectancy and face tremendous violence. In 2017/18, the police reported 1,651 hate crime offences against trans people in England and Wales, a rise of 81 percent from the previous year, per the BBC.

Hate crimes against trans people have risen by 81% in a year.

And then there’s actor and presenter Jameela Jamil, who isn’t unfamiliar with criticism online. I don’t necessarily agree with all of her politics or her appointment on a show about ballroom culture, a scene created by black and Latinx people. But I don’t really think I’m going to use my energy to explain to her, a complete stranger, via Twitter all the ways and reasons why I may agree or disagree with her. Her appointment shouldn’t have led to the dogpile of biphobia, queerphobia and then ableism which occurred. It’s hard to know when valid criticism and calling-out, will be co-opted by bigots, and before you know it Piers Morgan is tweeting “hope your other 1,345 virtue-signalling victimhood-craving ailments make similarly miraculous recoveries” at her.

On social media, especially Twitter, there’s a pressure to comment on every story — accurate or not— and weigh in with our own opinions. But the truth is we aren’t judge and jury, it’s not actually our jobs or always our burden to hold public figures to account for everything they do or don't do, especially when the ins and outs of their personal lives aren’t actually known to us.

This isn’t to say women in the media are perfect, can’t be at fault, problematic or dangerous — to think that would be dehumanising in itself. But often we need to stop characterising people as completely “good” or completely “bad” without any nuance. Sites like Twitter aren’t always the place for constructive conversations, it’s OK to formulate your thoughts and talk them over with friends or family instead.

When it comes to online abuse, as digital citizens we all have a part to play. Lauren Pemberton-Nelson from Glitch UK an organisation working towards ending online abuse, explains: “There’s a certain level of accountability that we must all share when online. Not only through committing to not abuse others online, but also as digital citizens committing to be active bystanders."

She gives examples: "This can be providing support to the victim through a kind message, amplifying their message or reporting the abuse. Small steps like this make a difference, and are raising awareness through our A Little Means A Lot campaign.”

So where do we go from here? “Ultimately, women, especially women in public life and from marginalised communities, bare the brunt of online abuse,” Pemberton-Nelson says. “Much of this can push inspiring, talented women away from public life. But we are determined not to continue down this trajectory by working with women interested in public life to give them the knowledge and skills that they need."

Mental health has to be taken more seriously in this country. Following the news of Flack's death, Molly-Mae Hague, a contestant on Love Island 2019 who knew the presenter, announced she would be donating 100% of her profits from her latest collaboration with fashion brand Pretty Little Thing to mental health charity Mind. Later Amber Gill, who won the 2019 series, followed suit with her latest Miss Pap collection. But really it shouldn't be left to just celebrities. On an individual level, we can stop engaging with tabloids that spew out hatefulness and and be active bystanders on social media. We should also be checking in regularly with our loved ones and friends. It really shouldn’t take another death for us to reevaluate. If it can happen to celebrities, it can happen to anyone who is vulnerable.