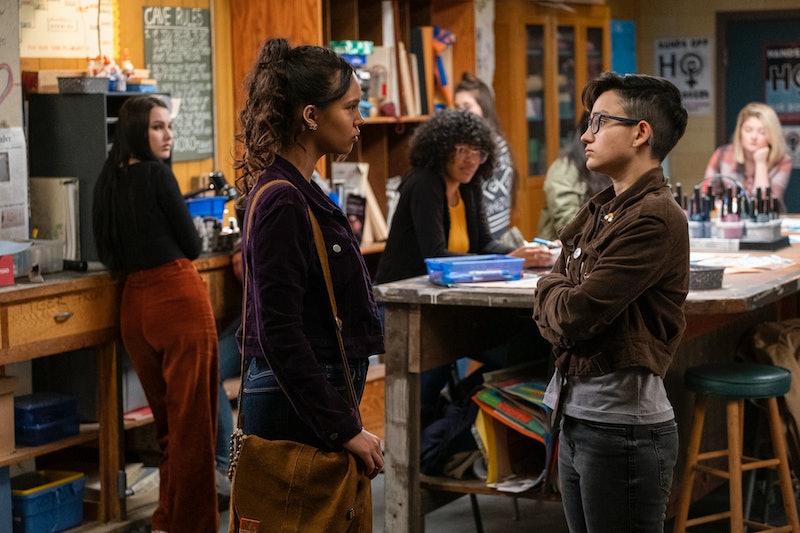 13 Reasons Why has explored toxic masculinity from the very beginning, but largely from the male perspectives of characters like Clay, Tyler, Alex, and Zach. Finally, in Season 3, the female characters are taking charge and demanding to be heard — but the depiction of Jessica's journey towards feminist activism has not come without some problematic pitfalls. The “Hands Off” group on 13 Reasons Why shows how even the most inclusive feminism can still make people feel left out, and how even a TV show with good intentions can still rely on harmful stereotypes.

This is true on 13 Reasons Why with the depiction of Casey, one of the louder voices of Hands Off. She comes in hot with a literal "kill all men" agenda, joking that they name the group "Stab All the Jocks and Watch Them Bleed." Her haircut is coded masculine, and she sports a female sign T-shirt and a bunch of activist pins. Those pins also suggest that Casey is queer, and the "angry lesbian" stereotype is additionally harmful. At the very least, Casey's role on 13 Reasons Why is not played for comedy, though Ani does call her and Jessica "terrifying" in a way that feels like a wry English joke.

Put together, these visual cues form an exaggerated caricature of modern feminism and the "angry feminist" stereotype. Anita Sarkeesian's "Tropes vs. Women" episode detailing the "straw feminist" warns that this trope makes the feminist movement seem ridiculous, and therefore unnecessary. Sarkeesian's examples of this trope even include two other feminist caricatures with the woman symbol on their clothing, from Rugrats and The Powerpuff Girls!

Amid the #MeToo movement and the Trump presidency, American society is arguably more pro-female rage than ever. Some characters who were once seen as straw feminists, like the comical Mrs. Banks in Mary Poppins, are now seen as icons. There are reasons to be angry, and we want to see women get angry. The furious female characters in stories like The Handmaid's Tale, Sharp Objects, Widows, Midsommar, and Captain Marvel channel that rage well and are championed for it.

And yet Casey still reinforces negative views of feminists. It's vitally important to note that these concerns have nothing to do with Casey's gender expression or queerness. It's that she comes across as a fictional representative of an ideology — or of someone's outdated, surface-level views of an ideology — on a television show, rather than a nuanced person with thoughts and feelings, who happens to have some (maybe questionable) views.

Casey exists on 13 Reasons Why to do things like lead the group in protesting Bryce's funeral against Jessica's wishes, a decision that ends up not only causing chaos, but is emblematic of the type of activism that does more to destabilize than to actually accomplish meaningful change. But the real problem isn't that Casey leads Hands Off to protest Bryce's funeral, it's that we have little to no insight beyond the surface level of why that decision was made.

Instead of actually developing her character to understand why she might feel that this is a good decision, the show is content to leave Casey as simply a symbol of activism gone wrong, dropping the ball on any sort of meaningful, thought-provoking exploration of the pitfalls of activism entirely. We never even learn why she's angry, beyond being a survivor. She just is. It's clear that Casey is there to further Jessica's storyline, not her own.

It doesn't help that Casey is argumentative, silencing Tyler by telling him to "be a f*cking ally" who shouldn't tell actual survivors what to do, not knowing he is one, too. We're on Jessica and Tyler's side as audience members, so the fact that Casey is rude makes it difficult to take her seriously — even when she has legitimate concerns about equality, the patriarchy, and the rape culture at Liberty High. As we're watching the show and wanting to champion these girls for fighting back, this portrayal is so frustrating.

While the group did not mean to incite a riot at the Homecoming game, it ultimately becomes clear that their combative methods are not getting anyone to listen. The change in Hands Off's activism comes when Jessica realizes that Tyler has been suffering in silence about his own assault. When the principal asks her to apologize on behalf of the school for the riot, she admits their mistake while reinforcing their message.

"Making mistakes is part of being a survivor," Jessica says to the school, asking them to think about who actually got hurt at the Homecoming protest. By working together and seeing each other, she suggests, the school can see the truth: that sexual assault affects everyone's lives, and we need to be willing to listen to survivors when they step up to tell their stories.

After Jessica's speech, Casey apologizes to Tyler and invites another survivor to join the group. It's a step in the right direction, and there's still one more season of 13 Reasons Why left for the show to further develop and add dimension her character. But for some fans, the damage may have already been done.

More like this
It’s Official: 'The Bachelorette' Is No Longer A Fairy Tale
By Samantha Allen
Casey Didn’t Stay Single For Long After 'FBoy Island' Season 2
By Brad Witter
Brad Pitt Is A Huge Fan Of This British TV Show
By El Hunt
Christina Aguilera Took A Powerful Stand At Brighton Pride
By Sam Ramsden
Get Even More From Bustle — Sign Up For The Newsletter