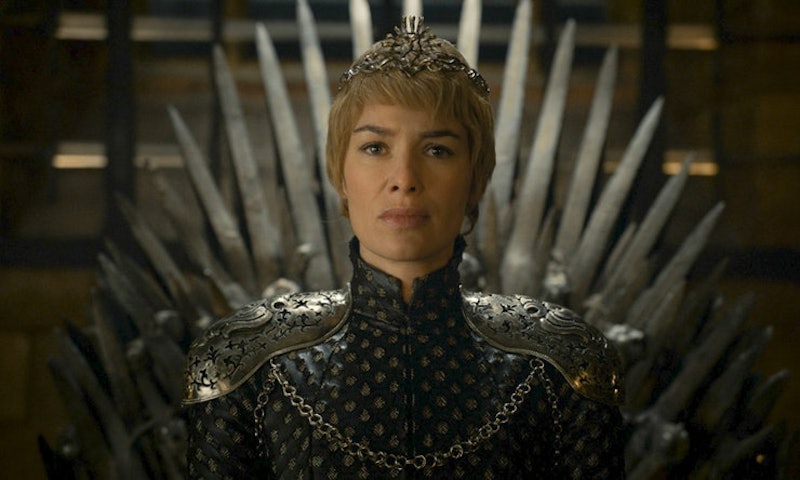 In the Game of Thrones Season 6 finale, Cersei Lannister sat upon the Iron Throne — and it was one of the most horrifying scenes of television I've ever watched. It wasn't brutal in the head-popping, eyeball-squelching kind of way this show is known for, nor did it fill me with the kind of panic that coursed through my body so intensely on Sansa and Ramsay's wedding night. But, what I felt was the absolute horror of hopelessness; the foreboding considerations of just how many lives would be irreparably damaged, if not lost, as a direct result of this Lannister's reign. More specifically, I feared for the women in Westeros and the lands to its east.

Cersei is often hailed a feminist icon by many people in my generally progressive, liberal-minded social circles. I kind of get it. Cersei exists in a world that is cruel, belittling, and downright dangerous for women. It is not entirely unlike our actual world in that regard. It's simply more covert about its prejudices. To say that Cersei is tough AF despite her environment would be a heinous understatement. She was a fierce and fearless mother when her children lived. She fights for what she wants, no matter what it takes. She is, presently, queen of the whole damn kingdom, no matter the odds that were stacked up against her.

Cersei does not stand for all women. She stands only for herself.

All that said, Cersei Lannister (and more specifically, the for-TV interpretation of her) will never be my feminist hero. Among her many flaws exists a most crucial antithesis to feminism, which is that Cersei does not stand for all women. She stands only for herself.

My interpretation of feminism has long been that it is a system of beliefs rooted in the advocacy of all of women's rights. Many feminists make it a point to fight for most marginalized among us, including women of color, poor women, trans women, indigenous women, and disabled women. In other words, women who Cersei Lannister certainly wouldn't dedicate an ounce of time or energy into. Her distaste at the residents of Flea Bottom (the least affluent neighborhood of King's Landing) has long been just one sign that Cersei finds poverty-stricken people, women included, pretty grotesque. As queen, and then queen mother, and queen again, she no doubt has the resources needed to make a difference. But, she'd never think to.

One of the most disturbing aspects of Cersei's character is her perpetuation and utilization of rape as punishment.

It isn't just the most marginalized women of Westeros who Cersei doesn't care about, though. Her fellow noblewomen also exist, in her eyes, to be either tormented or stepped over. Cersei has long wanted Daenerys Targaryen killed, for example. This will, in part, come down to the fact that Dany's father was an enemy to the Lannisters. But it'll also be rooted in Cersei's fear of losing power. In her eyes, it is seemingly better to kill a young woman before she even has the chance to conceptualize her own strength.

Then there was Joffrey. Cersei loved her son, but she also knew him (perhaps better than anyone). She knew that he was a power-hungry, blood-thirsty little sh*t who posed a danger to everyone around him, herself included. She would have still had Sansa Stark marry him, though. She is someone who will always prioritize her status, and the alliances that will benefit her in some way, over the safety and wellness of a young woman who is only just old enough to bear children.

One of the most disturbing aspects of Cersei's character, however, is her perpetuation and utilization of rape as punishment. In yet another gruesome Game Of Thrones scene, we saw Cersei finally wield her revenge against Septa Unella in Season 6. Unella, alongside the High Sparrow, had previously imprisoned, beat, and shamed Cersei for her sins of adultery and vanity. The septa also accompanied the then-queen mother on her walk of atonement, chanting "shame shame shame" while a naked, vulnerable Cersei made the journey from the Great Sept Of Baelor to the Red Keep as passerby hurled insults, defecations, and fists at her body.

Last season — after Cersei had blown up the Sept and Margaery Tyrell along with it (a woman who threatened Cerei's position of power by virtue of being the new queen) introduced Unella to the now-extra-monstrous Sir Gregor Clegane. That he would likely rape and otherwise torment the septa was obvious, and Cersei mockingly chanted "shame shame shame" as she walked away.

She cannot be considered a feminist ... Cersei is a villain. And, she's a villain who happens to make life a hell of a lot more difficult for her fellow women.

The septa wasn't exactly a hero of the series, and Cersei's walk of atonement was fascinating in that it led so many viewers to empathize with this villain. Contrary to its name, however, the walk of atonement didn't, and cannot, serve as Cersei's redemption arc as her character only grows more wicked thereafter. Sexual assault shouldn't be a revenge tactic. Even in this world, it's not a tool utilized by other powerful women. It is a tool utilized by Cersei, who has been known to turn a blind eye to the rape and murder of many other women and children, too (including Elia Martell, and what we can only assume are a great many rapes at the hands of Meryn Trant).

Game Of Thrones is an incredible work of fiction for many reasons, among them its ability to present both its heroes and villains as equally multifaceted and complex. Jaime Lannister pushed a young Bran Stark out a window, crippling him forever. Yet we cheer him on when he later saves Brienne Of Tarth from a bear. Sandor Clegane conducted all of King Joffrey's commands, no matter how brutal, but we warm to him when we see him warm to Arya. Cersei's actions have led to countless murders, rapes, imprisonments, and torture sessions, but we still sometimes root for her because she's a bona fide badass in a world that has long tried to silence and shrink her.

Even in the narrative of Westerosi society, however, she cannot be considered a feminist. She is an extraordinarily written character, sure. She's an even better written villain. But this is what's critical to remember: Cersei is a villain. And, she's a villain who happens to make life a hell of a lot more difficult for her fellow women. She's a villain who has cared for no other woman beyond her own daughter; a daughter who is no longer around. Moving forward, the only woman who Cersei is likely to stand for is Cersei; and the fact that she currently has a whole throne to herself is probably only going to make matters worse.