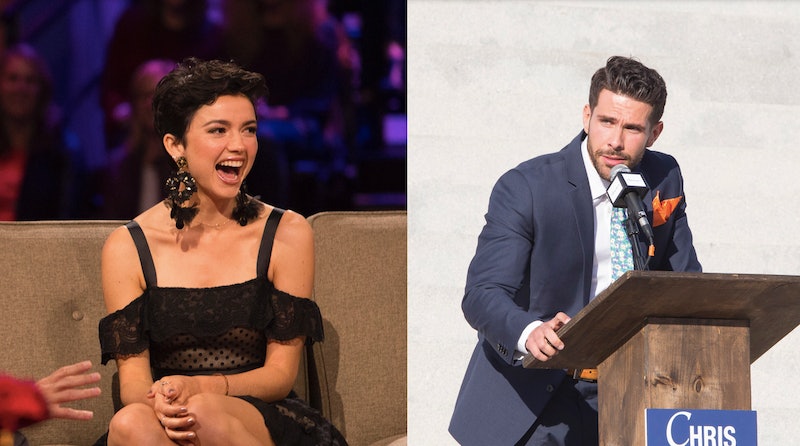 After competing on Arie Luyendyk Jr.'s Bachelor season, Bekah Martinez has plenty of opinions about the franchise, and she's dishing all to Bustle. Read what Bekah has to say about Becca's Bachelorette season and Chris' failure to be a compelling villain in this week's recap.

So this week was in exotic Richmond, Virginia. I just want to note that this was the point in our season where we went to Paris. Virginia, France... anyway. This season’s budget is irrelevant.

The first date was a one-on-one with Jason. He seems like such a sweetie, Becca seems to really like him, and their date was great, albeit unremarkable. Here’s the summary: They went to a weird outdoor goth party, kissed a lot, drank beer out of wine glasses with Jason’s friends, kissed a lot more, had dinner, and fell in love.

But here's one thing I still don't get about the dinner dates: I truly don’t understand why every contestant feels the need to bare their most depressing moments during the evening portions of the one-on-one dates. I just feel like there are other ways to show depth and strength without whipping out the sob stories. Maybe some people feel the need to be transparent about those things early on, and that’s okay, it just tends to feel a little predictable and inorganic on the show. Here comes the dinner date... what’ll it be this time? Terminal illness? An abusive relationship? Like I said, there's nothing wrong with opening up about those things, there are just other ways to build a serious connection while saving the traumatic secrets for off-camera.

Regardless, Jason seems like a great guy, even though his hair screams late '80s investment banker. Patrick Bateman, anyone? But speaking of American Psycho, let’s move on to Chris.

I think Chris intended to make the most of his time during the group date, and instead he proceeded to make a huge fool of himself. What the f*ck was he thinking? Honestly, people can say whatever they want about producers manipulating situations or villains getting a bad edit, but listen: Everyone has choices and autonomy about what they want to do. I know how this show works as a contestant. Chris had a choice about how he would handle the group date, and he chose to get on a mic in front of a live audience and complain about some dude calling him fat. Was he just gunning for screen time at this point? Because this was obviously not the best approach if he really wanted to win Becca’s heart.

The thing that sucks the most is that despite the drama, Chris isn’t even an entertaining villain. He’s just cringey and infuriating. Even Krystal on my season was great TV. She had great catchphrases (“GLITTER”) and her delusional perspective of herself was interesting. Chris just makes me want to slam my laptop shut. There’s not much to say about him that isn’t obvious to anyone already watching. He’s volatile, low-key abusive, can’t handle criticism, and doesn’t know how to process negative emotions. I dated dudes in high school who were vastly more emotionally advanced than this 30-year-old trainwreck.

So let’s all give a collective internet cheer that he is off of our screens for now, at least. I’m sure we’ll all have the pleasure of witnessing some Chris 2.0 shenanigans on a little beach in Mexico.

That’s all for now, folks. I’m choosing to gloss over Leo’s date and the rose ceremony because they seem comparably unremarkable compared to this Chris and Lincoln mess. See ya’ll next week! ;)