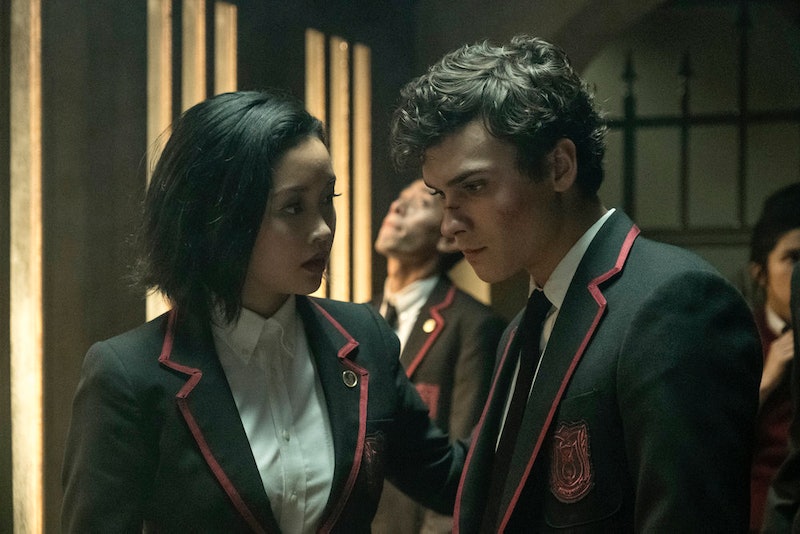 It's probably best to warn any potential viewers of Syfy's new series Deadly Class not to get too attached to any particular character. After all, the show, which premieres Jan. 16, takes place in the 1980s at a secret school for teen assassins, so there's plenty of brutal violence and a pretty high body count. And every death (and there are many) is shocking and ruthless.

Based on the graphic novels of the same name, Deadly Class is staying true to its badass source material. As anyone who has read Rick Remender's love letter to the punk counterculture of the '80s knows, that means major character deaths will be coming fast and furious. And the Deadly Class stars confirm that the Syfy adaptation isn't pulling any punches (or katanas or knives or bullets) when it comes to killing off those same characters onscreen. With a school full of the kinds of characters who are usually the villains of the story all learning how to kill and get away with it, the stakes couldn't be any more life-or-death.

To All the Boys I've Loved Before star Lana Condor, who plays the deadly and mysterious Saya Kuroki, tells Bustle along with a group of journalists on set that the show had to "stay true" to the comics in terms of killing off main characters at King's Dominion, the secret school hidden right in the middle of San Francisco. "In the graphic novels, there's a lot of deaths and that we would be doing a disservice to the source material if we didn't follow that," she says. "Unfortunately that sucks because it's like watching — who kills off all their characters?"

She sits up with a big smile as she remembers. "Game of Thrones!"

"It's like watching Game of Thrones and you have major trust issues, right, watching that show? It sucks! It's the worst [having to say goodbye]. It's really the worst! And then knowing that if you're one of the few who survives, that feeling where you're like, 'I am not deserving!'"

She then starts to laugh, because she knows that's exactly why fans love Game of Thrones so much — and why people will love Deadly Class no matter how many "trust issues" it creates. The high-stakes and shocking twists are guaranteed to hook fans immediately.

"I think this is the perfect show to watch right now because a lot of people right now can relate to feeling misunderstood or isolated," Condor adds, referring to not only her character but all the teen assassins living and studying at King's Dominion. "With all the craziness that is going on in the world, this show will provide a support that the isolation you feel, you're not alone."

Deadly Class begins when a new student, Marcus (Benjamin Wadsworth), is brought into the fold with a mysterious past and a serial killer-level reputation that he might not actually deserve.

"Marcus is definitely a disruptive force," Condor teases. "In King's Dominion, we were used to doing our thing. We knew how [everything] went. And then all of a sudden this unknown disruptive force comes in and the girls are very thrown by it. It's threatening to people."

But not to everyone: Saya and Marcus begin to connect in ways that will surprise the normally standoffish warrior. "Saya sees Marcus' pain and there's a lot that she can relate to, so even though she might not want to let her guard down, she does," Condor says. "When you connect with someone, you can't help it."

But with a school full of killers, romance isn't so easy at King's Dominion. "There is a love triangle between Maria [María Gabriela de Faría], Saya, and Marcus," Condor reveals, but she promises that Deadly Class is going to subvert what fans usually see from the "high school love triangle" trope.

"The difference that offsets what you usually see in television is that Maria and Saya are actually well aware of both of their relationships with Marcus and yet they still have a good relationship," Condor says of the BFFs.

She pauses, then adds, "I think it's rare to see women who are fighting over the same guy be on the same team. In television you usually see women who are in a love triangle [be] super catty or like, 'Oh my god, no, he's my man!' But in this show, Saya and Maria are still together and they're still supportive even though they're [interested in the same guy]."

And while King's Dominion is unlike any high school you've ever attended, it turns out that even teen assassins have many of the same anxieties as regular high-schoolers.

"The lunch room is very cliquey and finding a place to sit is the most high school thing about King's Dominion," Condor says with a laugh. Some things will never change.

More like this
'Fate: The Winx Saga’s Cliffhanger All But Begs For A Season 3 Renewal
By Brad Witter
Nicola Coughlan Shared A Lady Whistledown Excerpt From ‘Bridgerton’ Season 3
By Grace Wehniainen, Alyssa Lapid and Sam Ramsden
A New 'And Just Like That' Table Read Pic Confirms A Key Character's Return
By Jack Irvin and Grace Wehniainen
You’ll Definitely Recognise Both Of Ty Tennant’s Parents
By Maxine Harrison
Get Even More From Bustle — Sign Up For The Newsletter