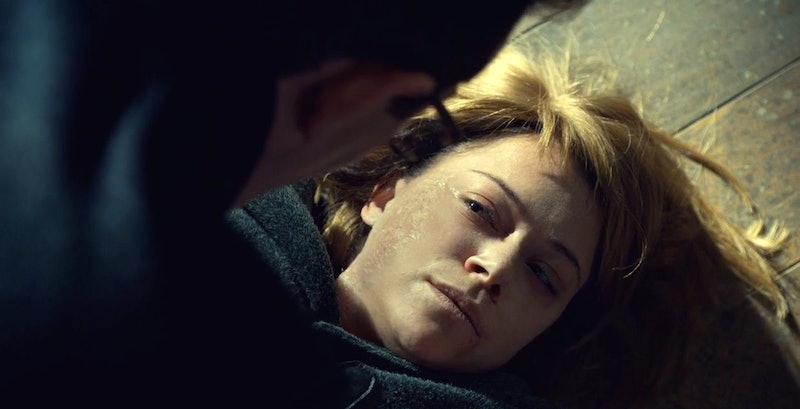 Ferdinand and M.K. of Orphan Black have a long history dating back to the 2000s in Helsinki, Finland, when the Topside operative killed off self-aware, teenage Leda clones. In Season 4, M.K. was revealed to have survived this deadly plan, but the Season 5 episode "Clutch of Greed" puts a tragic end to this survivor's tale. During the June 17 episode, M.K. is killed on Orphan Black by Ferdinand in an emotionally crushing — and quite literally, physically crushing — way. Although M.K. is a relatively new clone to the club, her death is still a blow to Sarah's plans and serves as a reminder of how deadly Ferdinand Chevalier can be.

After Scott reached out to M.K. in the Season 5 premiere, she appears in "Clutch of Greed" to help Sarah get Kira away from evil clone Rachel. But rather than hiding behind her computer screen as she normally does, a very sick M.K. goes to Felix's loft to hide out while she assists them. She orchestrates a way for Sarah and Kira to go into her underground network and from there, the plan is for M.K. to go to Scott's lab. Instead, after Sarah successfully retrieves Kira from school while impersonating Rachel, M.K. remains at Felix's place, which prompts Sarah to go save her.

Unfortunately, Ferdinand follows Sarah from Kira's school to Felix's loft. In order to get Kira safe, M.K. offers to impersonate Sarah impersonating Rachel. Yet, considering the backstory between Ferdinand and M.K., fans should have known this is a death sentence for the sole survivor of Helsinki. After all, in Episode 4 of Season 4, Ferdinand said to M.K., "I'll find you. I will finish Helsinki."

Beyond Ferdinand being happy that he is now able to complete his Helsinki mission, he derives sick pleasure from the fact that M.K. is dressed as Rachel since she spurned him previously in the episode. Ferdinand actually seems more enraged about Rachel than M.K. when he brutally steps on the hacker clone's chest and kills her. Kira senses her death immediately — which in a twist of tragic irony leads to Kira refusing to go into M.K.'s underground and instead chooses to go with Rachel. That means that M.K.'s death appears to be in vain since she came out of hiding to help Sarah save her daughter.

But before you shed even more tears over M.K.'s fate, some good may come of it. Rachel is furious with Ferdinand for going against her orders and killing a clone, so she turns him out on the street. Knowing Ferdinand's obsession with Rachel and the rage toward her that fueled him as he killed M.K., there's no way he is going to be OK with her turning him away. If you want to see Rachel gone, there's a good chance Ferdinand could have a hand in it later in Season 5. While Ferdinand is not an ideal ally for Sarah, he could still help her cause eventually in the final season. So don't expect this to be the last the Clone Club sees of this vicious man even though "Clutch of Greed" is sadly the last that fans will see of the Helsinki survivor M.K.