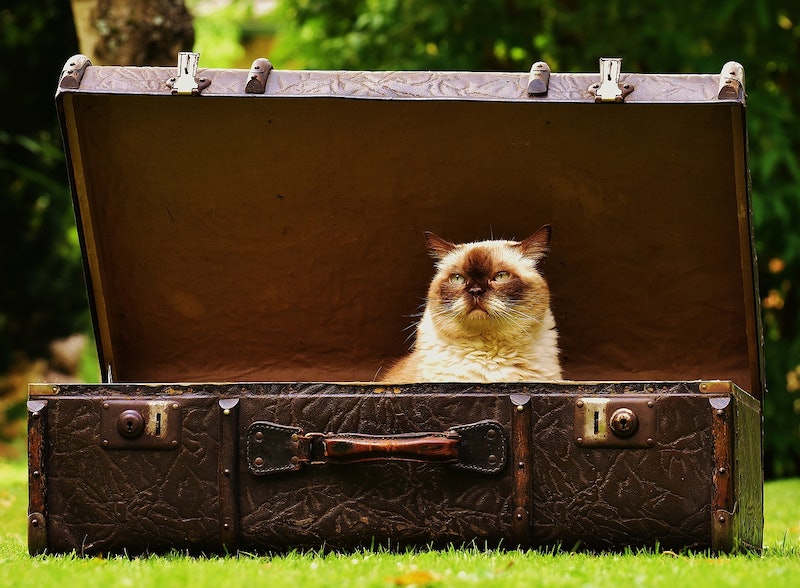 If you're a cat owner, there are likely three questions plaguing your mind: First, why do cats hate water? Second, where did the whole nine lives thing come from? And third, why do cats like to sit on things you're using? This third one in particular is a crowd favorite and has, in fact, even inspired things like the Cats on Laptops Twitter page and a Tumblr blog called Cats on Computers. It's almost as if they're saying, "Oh, hello. I'm sorry — were you busy reading this here book? You can now pay attention to me instead." HelloGiggles decided to explore the matter further, offering a few reasons why our cats sometimes make themselves at home in the most inconvenient of places — and it turns out that what they dug up is just the tip of the proverbial iceberg.

One reason cats love to sit on your computer or book while you're using it, found HelloGiggles, is because the item smells like you. Like many creatures, cats are largely guided by their sense of smell; and if an item has your scent, they like to be near it because it makes them feel safe and happy. According to I Heart Cats, cats' sense of smell is 40 times stronger than that of a human being, and argued to be their most important sense organ.

Some sources say cats have 200 million scent receptors in their nasal cavity — more than most breeds of dogs. Others, however, say dogs win in this department, with 300 million receptors to the average cat's 80 million (and the human being's measly 5 million). Whatever the numbers may be, we can know one thing for certain: Your cat knows your scent when it smells it — and if it's on a computer or book you were just handling, they'll want to cuddle close.

And if you've noticed that your cat only likes to sit on the book you were just reading — and not any of the others — yes, that's totally a thing. Kitty doesn't have picky taste in books; it's that he wants the one you were just handling. In fact, one cat owner placed "dummy books" on her bed as an experiment, but her cat only wanted the one she was just reading.

A second reason cats like to sit on your stuff is because they're territorial, and they're marking their spot. Sometimes animals will do this by urinating on the item; but cats also claim their territory by rubbing themselves on it. When they hang out on your stuff, they transfer their pheromones (which come from their face and feet) to the object, giving it a scent that's uniquely theirs. It's a way of establishing their ownership.

For the species, marking their territory with their scent has been a way of setting boundaries, both for themselves and for other felines. When it smells its own scent on something — maybe your computer? — the cat knows it's safe; additionally, it will continuing reapplying the scent as it diminishes over time to keep that safeness around. And when another cat strolls along and smells your fuzzy friend all over that book you've been getting through, it sends a message from your pet: That is your book (and by that, I clearly mean your cat's).

Do you ever get the impression that your cat is very purposely getting in the way by standing on your computer when you're trying to get work done? That's no coincidence: You pal knows when you're giving your attention to something else; and, well, they want the attention on them. This is yet another reason cats sit on stuff you frequently use. Wherever your focus and gaze is, that's where they want to be.

Another reason cats like to sit on your things has to do with their body temperature. A feline's body temp rests at about 102 degrees, and they're known to find warm places to help keep the temperature up.

Your warm laptop or a book that became warmer from being held in your hands? It's the purrfect spot to cozy up.

Next time your cat sits on the exact thing you need and you start to get aggravated, remember that it's doing it for a reason!

More like this
21 Absolutely Adorable Christmas Gifts For Dogs
By Carolyn Steber
If You Have Pets, You Probably Don't Realize You're Making These Common Mistakes
By Mackenzie Edwards
Anguilla Is The Under-The-Radar Caribbean Destination You Need To Visit
By Rachel Lapidos
13 Gifts From Latina-Owned Businesses For Everyone On Your List
By Marilyn La Jeunesse
Get Even More From Bustle — Sign Up For The Newsletter