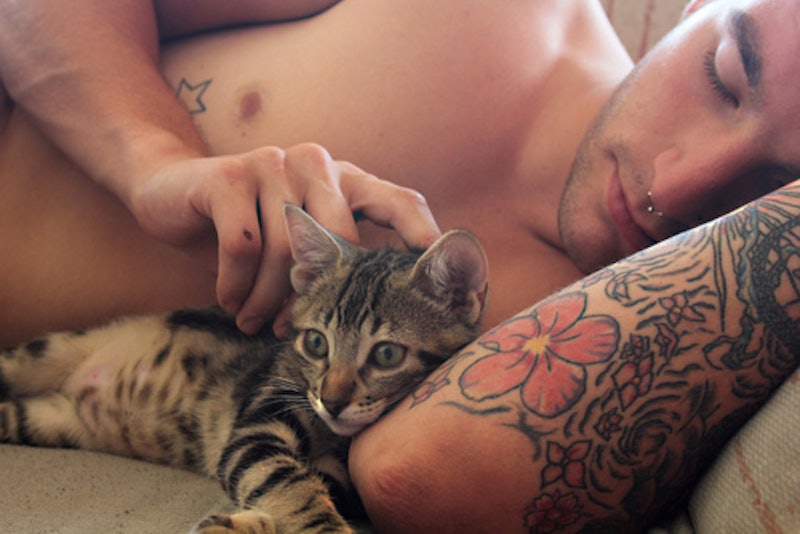 Did you know that people used to be really weird about what kind of pet each sex should have? It was thought that cats were for females, and dogs were for males, and that a woman who preferred dogs, or a man with cats had some major gender issues, and that you should avoid them like a fish restaurant on a Sunday.

It was believed that you should always choose a dog dude over a cat dude for dating, because clearly the cat dude was someone who straddled the border between crazy and asexual.

This theory that women needed to stay the hell away from men who owned cats was just stupid, and offensive to cat men, and to the people who loved these Ailurophiles (technical name for cat lovers.) Should we reject tattooed men, or surfers because people used to think that men who were inked were criminals, and that surfers were always wasted? Shouldn't the ability to love, and be interested in things, no matter what, be encouraged not ridiculed? Not dating a certain kind of men is just falling victim to these preconceived judgments,and if you follow them, you'll be missing out on some really spectacular dateable men.

Date a cat man and you won’t be sorry. Cat owners, like their cats are never boring, and are an excellent addition to your life.

Studies show that self-identified cat owners scored higher on intelligence tests than self-identified dog owners. I’m not saying that dog-owners aren’t brainy too, just that cat-owners are slightly cleverer. Maybe dog-owners are more physically fit, or are nicer to their mothers. I don’t know, all I do know is that cat owners tend to be a little bit smarter and having smarts is a really good thing to have in a date.

2. Men who own cats aren’t squeamish.

Cat man are used to cleaning litter boxes, cleaning up hairballs, and will drink from a glass that their cat just drank out of. Cat men are tough. They’re not going to have a problem taking care of you when you’ve had too much to drink or have the flu.

You don’t have to worry about your cat guy being stanky—he knows the importance of good hygiene and why wouldn’t he, he probably sees his cat clean himself through-out the day, and that includes his junk too.

They know they don’t have to prove how masculine they are just because they have a cat. Also, cat dudes generally love all other kinds of pets, making them an overall animal person.

5. They are masters of reading body language.

You know when your dude asks you what’s wrong, and you say, “Nothing,” even though you are pissed off. Your cat guy knows how to pick up on your subtle clues such as the stink-eye you're giving him, or how your head looks like it's going to explode. A cat guy will give you some space, or if necessary, initiate a plan of pampering.

It’s been awhile since you’ve seen your girls, and you need some girl-time. Your cat dude is cool with that. He can be alone and won’t get all stalkery on you( like checking out your Facebook page for confirmation that you really are out with the girls.) He's ok to just to chill on his own and pet his cat while you have fun.

7. Cat guys can give you what you need when you need it.

Hard day at work and you just want to be touched? Your cat guy can give that to you, or maybe you really need to release your frustration by having some hot adult fun, your cat guy is down with that as well.

8. Dating a cat guy is like dating a hipster

They look super cool, love a good party and they're also ok to hang out just the two of you in their cool loft. They won’t hold you back from pursing your dream, they’re very open minded and to trying new things.

9. Cat guys are comfortable with their sexuality.

They know that having a cat doesn’t mean they are more female than male.They can be in touch with their female side without it emasculating them and they don’t have to be overtly masculine either.

You can have friends and family that aren’t into cats and that’s ok, but probably the person you date should be an animal lover. One of the very enjoyable aspects of being a pet owner is telling stories about the crazy things your pet does or sharing hilarious internet cat videos with someone who loves them too.

Cat guys are as easy to date as their cats are to own—just give them a little cuddle now and then, some food and water, and a place to do their business, and they’re good to go.

More like this
Hinge's New NFAQ Feature Is Demystifying Queer Dating
By Emma Carey
The Best Time To Date After A Breakup, According To Experts
By Bustle Editors
The “Whisper Method” Is The Latest Manifestation Technique Going Viral
By Meguire Hennes
The Top Mistakes Scorpios Make In Relationships (& How To Avoid Them)
By Nina Kahn
Get Even More From Bustle — Sign Up For The Newsletter