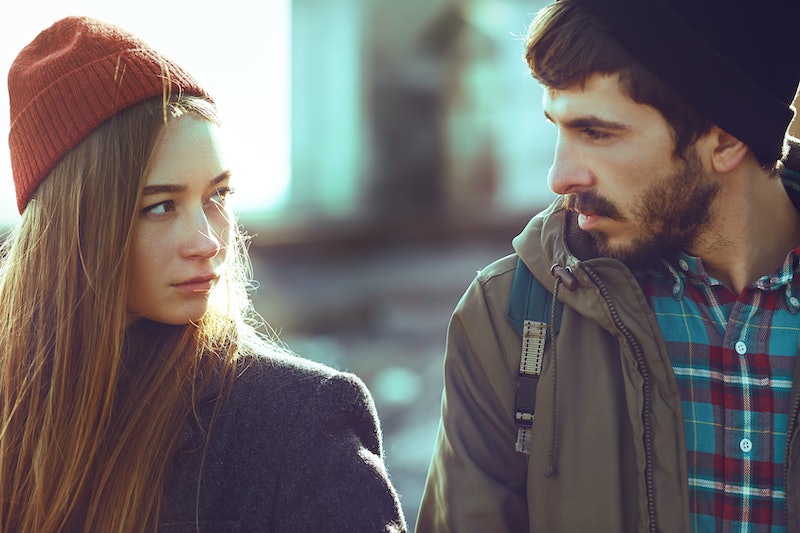 Sure, you've heard about the high divorce rate, but what's the real reason people file for divorce? Women are twice as likely to file for divorce than men, according to a 2000 paper published in American Law and Economics Review. And that is a huge difference — but a new study may give us some insight into why that happens. And it has to do a lot with not only marital problems or tension, but differing levels of marital tension between the partners.

The study from the University of Michigan followed 355 heterosexual couples over a total of 16 years. Over that period, about 40 percent of them divorced, which reflects the national average. The data came from the Early Years of Marriage Project, where participants were interviewed in between the first four and nine months of being married and then throughout their marriage — in years two, three, four, seven, and 16 of the project. So we're talking about a lot of interviews and a lot of data.

Women showed higher level of tensions than men at the beginning of the marriage, but, interestingly, the male's levels of tension increased more over the course of their marriages.

"It was surprising that husbands showed greater increases in tension than wives," Kira Birditt, research associate professor and lead study author, tells Bustle. "We had predicted that because women tend to report more tension than men that wives would show greater increases. But it appears that wives start out with greater tension and that by year 16, husbands experience the same amount of tension as wives. It appears that husbands basically 'catch up' with wives over time." But, even though men's increased more on the whole, the real problems started to arise when women maintained a higher tension level or a higher increase intention over the course of the marriage.

What Can We Learn From This

The divorce rate was greater when men reported low levels of tension and women reported a higher accumulation of tension over time. In other words, it suggests that when men are not as tense and do not reflect their wive's feelings, that's when the problem tends to arise. So it's not the tension that is necessarily the issue, it's the disparity.

"I think it is useful to know that experiencing tension is not necessarily detrimental," Birditt says. "It appears to be detrimental when wives show increased tension and husbands have low tension. Thus, it is important to listen to one another and attempt to resolve tensions as they occur." And this can be helpful for couples, because it shows that listening to each other can help — and that you don't have to panic at the first sign of a problem.

Where do the differing levels of tension arise? Birditt suggests that wives might have more realistic expectations of marriage, while men might idealize their wives, and said it's important to realize that even within the same marriage, the partners can have very different ideas about the quality of their relationship. This is another reason why communication is so vital, for any couple. You can't assume the happiness level of your partner. Women may be more likely to file for divorce than men because they are struggling in the relationship — and then that is exacerbated by the fact that their husbands don't seem to have the same worries. It makes it feel like their husbands are not invested. It's easy to see how that frustration could lead to them wanting to leave.

Every relationship is different, so there is never going to be one clear reason why people get divorced or stay together. And while this study addresses an issue in heterosexual couples, the same principle applies to any couples — it's so important not to assume that the relationship is ticking along fine without actually consulting your partner. It's totally normal to have tension in a relationship, but you need to talk abut and work through it together. Because the real problem isn't facing rough patches, it's being out of touch with your partner's wants and needs.

More like this
Are Gemini & Leo Compatible In A Relationship?
By Kristine Fellizar
What Are Swingers? Everything You Need To Know
By Lexi Inks
Melony & Gia Prove That Couples Who Grow Together, Stay Together
By Jessica Morgan
How Getting An Abortion Has Changed From The ’60s Through Today
By Amanda Chatel
Get Even More From Bustle — Sign Up For The Newsletter