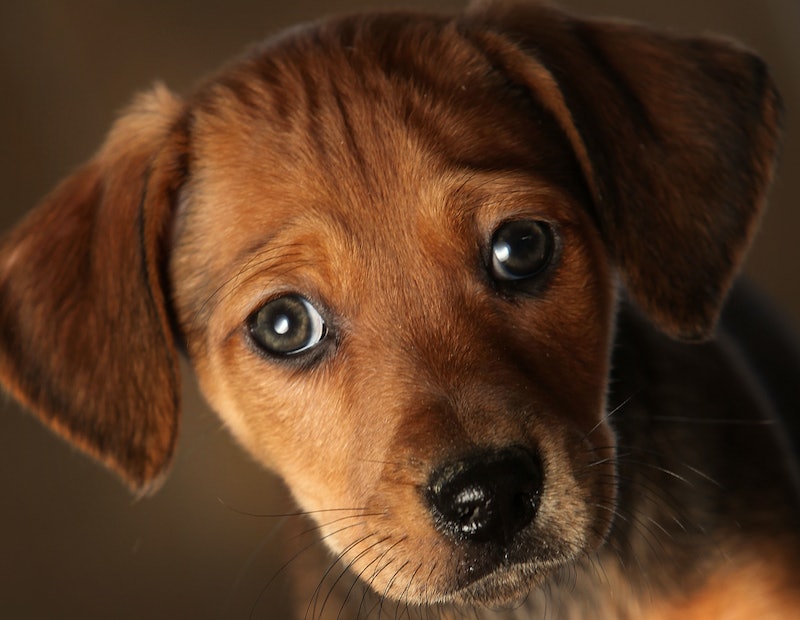 My dog has a spinal condition that sometimes causes her to yelp in pain, and the sound of her distress is more than I can bear. As it turns out, I'm not the only pup parent who's sensitive to a crying dog. A new study published in the journal Royal Society Open Science found that pet parents find the sound of a whimpering dog just as sad as the cries of a human baby. So why is it so sad when dogs cry?

"Pet ownership is associated with greater sensitivity to pet distress sounds, and it may be part of the reason why we are willing to spend large amounts of time and resources on our domestic companions," study author Christine Parsons, an associate professor at the Interacting Minds Centre at the Department of Clinical medicine at Aarhus University, Denmark, said in a press release about the study. "It might also explain why we find interacting with pets so rewarding, and are emotionally impacted by both positive communication signals, like purring and negative, like meows or whines."

The study involved 500 young adults listening to sounds of dogs whining, cats meowing, and human babies crying. Overall, both dog and cat parents found whimpering dogs more negative than meowing cats, likely because cats are more self reliant than dogs and humans, and meows don't always indicate distress. All participants, whether they had a pet or not, were more affected by crying dogs than crying cats. And pup parents found the yelps of dogs as sad as the sound of a crying baby.

"The result suggests that dogs, more effectively than cats, communicate distress to humans and that pet ownership is linked to greater emotional sensitivity to these sounds. For sounds that we need to respond to, like a dog that is utterly dependent on its human host for food and care, it makes sense that we find these sounds emotionally compelling," Parsons said.

Personally, I find the cries of a dog extremely troubling. My neighbors once left their puppy outside in the rain when they weren't home, and the dog's cries were so upsetting that I brought the dog inside of my house and left them a note. For me, leaving a puppy out in the rain feels akin to leaving a baby outside alone because both are dependent on humans, whereas cats can more successfully fend for themselves. For example, a cat left outside in a fenced-in yard in the rain can jump the fence and seek shelter.

"This difference in animal dependence may explain why dog whines are rated as more negative than cat meows by all adults, including cat owners. Dogs may simply have more effective distress signals than cats," Katherine Young, a lecturer at King's College London and senior author of the study, said in the news release.

The study also cited previous research that found that people with secure emotional attachments are better able to identify distress signals in infants. Researchers noted that this might apply to the ability to respond to distress signals in animals as well. In the current study, adults who identified as having secure relationships were more negatively affected by the sounds of cats in distress than other people.

In addition, the study dispelled the "cat lady" stereotype and noted that choosing cats over dogs has no correlation with anxiety, depression, or difficulty maintaining human relationships. In fact, cat parents appear to be highly sensitive and compassionate to animals and humans alike. #TheMoreYouKnow.