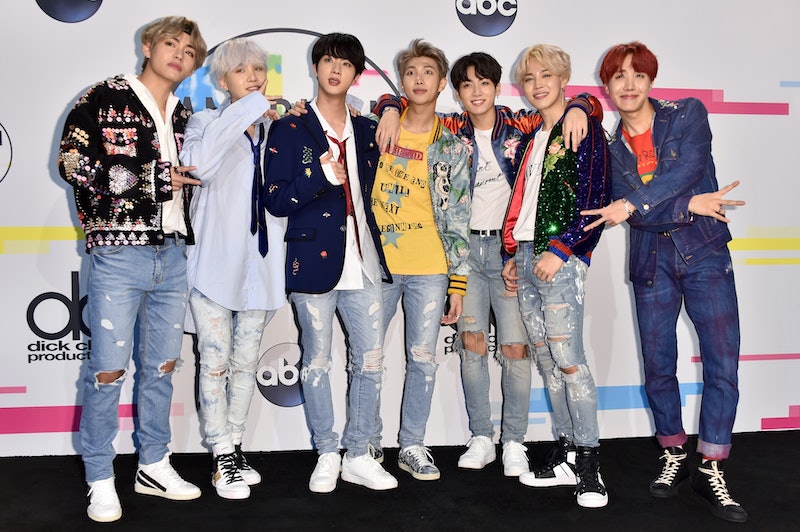 The 2018 Winter Olympics are coming to an end on Sunday, Feb. 25, and as is tradition, the conclusion will be celebrated with an epic Closing Ceremony. All the countries will be there, athletes will be wearing medals of bronze, silver, and gold, and South Korea, the host nation, will once again prove they really know how to put on a show. Unfortunately for some Olympians and some fans watching at home, BTS are not performing at the 2018 Olympic Closing Ceremony. Now, the exact reason why BTS isn't at the Olympic Closing Ceremony is unknown, but fans certainly have their own theories, some more likely than others.

First, in case you've been living under a rock recently, BTS is the K-POP supergroup quickly taking over the world. They were already international stars before making their American TV debut at the American Music Awards in 2017, but now they're a household name and can count Team USA Olympians among their impressive fanbase. Their song "DNA" even played during the Opening Ceremony. But despite being arguably the most globally recognizable K-POP group, BTS is not performing at the 2018 Olympic Closing Ceremony. Instead, South Korea will celebrate the end of the Winter Games with performances by K-POP stars EXO and CL.

It's unclear whether or not BTS were asked to perform at the Ceremony. Fans of the group, known as the BTS ARMY, have been arguing about their absence from the Closing Ceremony schedule for months on K-POP forums. One user, identified as Mehrvigne, wrote that the ceremony was planned two years earlier, before BTS earned their international reputation. Another, identified as _Jarhon, claimed that BTS was asked to perform and had to turn it down due to scheduling. None of the fans seem to know for sure, however, and none of the speculation has been confirmed.

BTS just recently completed an international press tour, and it looks like they're taking a bit of a break before starting up again, which might explain their absence from the Olympics. Earlier this month, one of the group's seven members, RM (or Kim Nam-joon), had surgery to repair a deviated septum, something that could very much impact his ability to perform live with the group. Whatever is keeping them away aside, fans are already expressing their dismay.

And they're not the only ones. Bronze medalists and Team USA breakouts, Alex Shibutani and Maia Shibutani (aka The Shib Sibs), also seem disappointed they won't be able to meet the members of BTS in person during their stay in South Korea. The ice skating siblings posted on Twitter on Feb. 16 asking fans if there was a way they could get some individualized Team USA gear to BTS.

It doesn't look like BTS and the Shib Sibs have had a chance to communicate yet, but hopefully both groups will keep fans updated. Meanwhile, the Shibutanis were able to meet Korean-American K-POP star Eric Nam, so it wasn't all lost. And some fans are still hopeful that BTS will make a surprise appearance at the Olympics, posting optimistic messages on Twitter.

BTS or no BTS, the 2018 Olympic Closing Ceremony will still be full of some fun Team USA-K-POP interactions. Team USA champ Chloe Kim is no doubt hopeful she'll get to run into CL, one of her favorite artists to listen to before a competition, as revealed in an interview with ESPN. CL responded by congratulating her with an Instagram post.

If fans can't have BTS perform for a global audience at the 2018 Winter Olympics, at least they can see Kim freak out over CL. And if that's not much of a consolation, then just think of how cool you'll sound when you tell all your friends that EXO and CL are neat and all, but BTS are the real K-Pop kings.