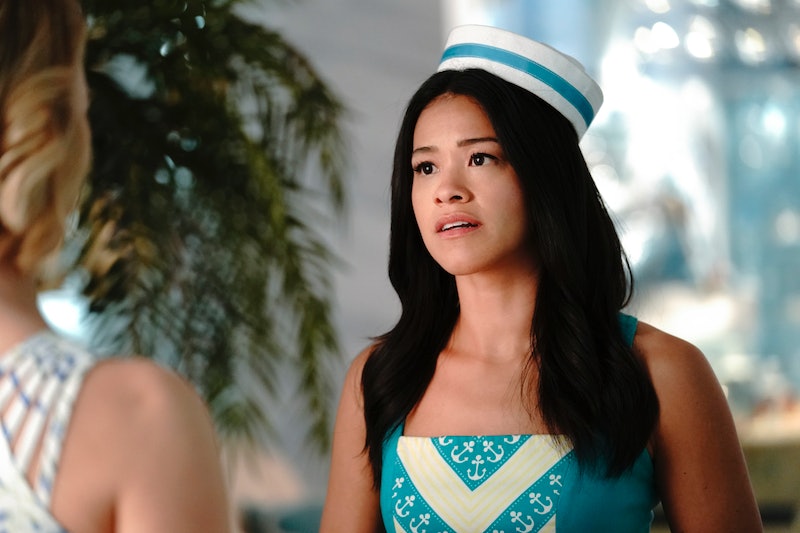 Fans of Jane the Virgin have grown accustomed to seeing Jane Gloriana Villanueva every week. But there is no Jane the Virgin on tonight, Wednesday, July 3. This seems particularly cruel since before you know it, Jane the Virgin will be no more. But that's probably precisely why the narrator isn't narrating a new chapter tonight. Plus, just like the Villanuevas, you get to spend some quality time with your loved ones a day ahead of one of Alba's favorite holidays — the Fourth of July.

The Season 4 finale showed how significant America's celebration of independence was for Alba and her husband Mateo. It was during fireworks on the Fourth of July that Alba decided she wanted to be a U.S. citizen. And while it took her decades to get there, Jane's abuela did get her citizenship during "Chapter 81."

But while Jane the Virgin respecting Fourth of July eve ties in nicely with the show's storyline, the lack of episode tonight is most likely more about TV programming. Not only will live viewership possibly be lower because of the impending holiday, but The CW is building up the suspense to the final few episodes of Jane's story. And for Jane the Virgin fans, that may be even more exciting than fireworks.

"Chapter 95" ended with the cliffhanger of Petra getting in a car accident with her mother Magda. She's evolved into one of the most delightful characters on the show — and is supposed to be Rafael's Best Woman at his wedding to Jane — so the stakes are high when it comes to her fate. So you better believe it was strategic that Jane the Virgin is making fans wait an extra week to find out if she's OK.

The official series-end schedule hasn't been released by The CW. But there are just five episodes left to hit the 100-episode mark, as The CW president Mark Pedowitz had announced there would be per The New York Times. And with tonight being a rerun, there are only four weeks to air them since the series finale will be on July 31. So it stands to reason that we will be blessed with back-to-back episodes one week. Unless, of course, the "celebratory episode" ahead of the Jane the Virgin series finale counts as "Chapter 99"... but it better not.

Either way, there will at least be one night of double Jane the Virgin before the show's gone for good. So get some arepas and enjoy fireworks tonight (or rewatch "Chapter 91") before the fireworks of drama that are bound to accompany the final handful of episodes of Jane the Virgin.