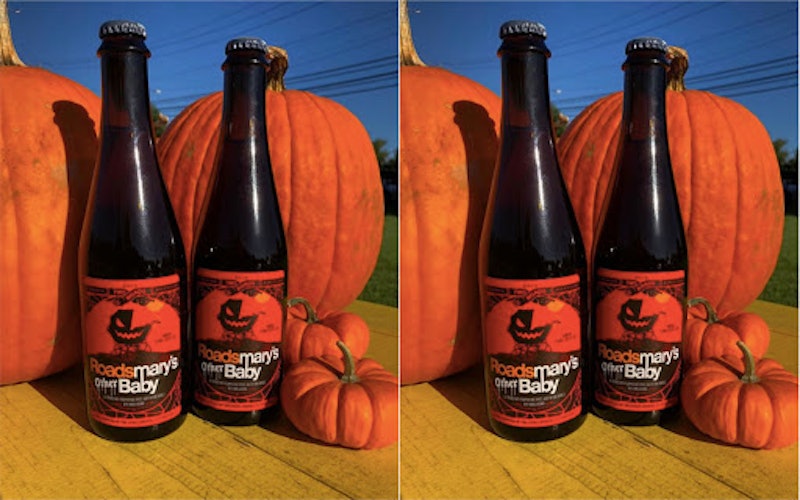 I love pumpkin beer. Actually, "love" is an understatement; I crave pumpkin beer, with a ferocity that is downright unseemly. From December to July, I pine for the start of pumpkin beer season — that magical week in August when beer bottles with tiny cartoon jack-o-lanterns finally pop up at my supermarket, signaling the arrival of shorter days, chillier nights, and beer that tastes like candy. Every year, I stockpile bottles for the long winter and spring months ahead. And every March, as I chug the last of my supply, I wonder why I can't just buy pumpkin beer all year round.

I mean, I sort of understand why I can't buy it all year round. Pumpkins, a key ingredient in pumpkin beer (duh), are generally only in season around the beginning of the fall. Plus, foods that are only available for a limited time are a huge thing for the companies that produce them — they're considered a form of "push marketing," where making a product available for a limited time is thought to "push" consumers into shopping and stocking up in a way they might not if the product were available all year. Anyone who has seen two grown adults nearly come to blows trying to buy the last bag of pumpkin spice coffee at the grocery store knows this to be true.

And yet! It's easy to poke holes in any of these explanations. Pumpkins, like a lot of produce, can be grown out of season now — and the main flavoring in pumpkin beer isn't even pumpkin, but "pumpkin pie spices" like allspice and nutmeg, which are equally fresh in October or February.

And recent food history is littered with one-time seasonal foods that have had year-round makeovers, like fun-sized candy bars and bags of candy corn. Or Cadbury Mini Eggs and Creme Eggs, which were traditionally only offered around Easter, but are now available throughout the year via permutations like the Cadbury Harvest Mix and Cadbury Screme Eggs. Though Cadbury's Tony Bilborough told the BBC in 2014 that the company wouldn't sell the candies year-round because it made them less "special," I know that I personally find it very special indeed that I can now eat a candy egg in December, just like the good lord intended.

Plus, though folks love to snark on the flavor of pumpkin beer as a modern millennial abomination — try to find an article on the stuff that doesn't include a phrase like "entrenched dislike" or "misguided confectionery fantasy" — humans have been cooking with nutmeg for 3,500 years, and pumpkin beer is as old as the United States itself. Early versions of pumpkin beer were brewed by Europeans in the U.S. in the 1770s through the early 19th century — though these recipes also involved ingredients like "birch twigs" and "dried apple parings," so perhaps they're a touch less relevant to our discussion than I had initially hoped.

But still! It's an American tradition, going back to waaaaay before flavored lattes, Yankee Candles, and whatever other products people mock because women like them. Surely such an important part of our culinary history shouldn't be banished to the month of plastic vampire fangs (which, p.s. really interfere with tasting a beer's flavor profile).

There are upwards of 1500 different pumpkin beers rated on Beer Advocate, which suggests that there a lot of pumpkin beer fans out there, as well. Yet the beer professionals I spoke to told me that they had seen very little consumer demand for a year-round pumpkin ale that could pair equally well with a winter stew and, uh, whatever the hell people eat in April.

Morgan Davis, sales coordinator at California's Buffalo Bill's Brewery — the company that created the first modern pumpkin ale in 1985 — told Bustle that though the brewery gets many calls and emails each year asking when pumpkin beer season will begin, they don't get many requests for it beyond that. "It seems to come down to a love for the seasons, and people purchasing based on the season," Davis tells Bustle.

"There are a few things that have remained seasonal in most people’s minds and I think pumpkin flavored products are one exception (along with say, Christmas cookies)," Phil Markowski, brewmaster and co-founder of Connecticut's Two Roads Brewing Co., tells Bustle. While I'm not the first person to ask Markowski why seasonal beers are, you know, seasonal, he notes that "from our perspective, the anticipation and expectation of a get it while it lasts seasonal product would be lost if it were available all the time."

Cat Wolinski, staff writer at drinks site VinePair, told Bustle that the timing on pumpkin beer is a marketing technique designed to get people excited, but that the flavors of the stuff also fit into the specific vibe people want to cultivate in autumn: "People want to feel warm and fuzzy in the fall, just like we want to feel sexy and frivolous in the summertime. It's fun to drink rosé in the summer — let's be honest, because it's pink — and it's fun to drink pumpkin beer in the fall because it tastes like pumpkin pie."

Though Wolinksi would not count herself among the many, many, many beer and wine experts who are avowed pumpkin beer haters, she adds that in her experience, "the reality of it is, a lot of pumpkin beers aren't very good...To bring back the rosé comparison, everyone loves the idea of rose, but tasting a ton of them side by side in a professional setting reveals that a majority of them aren't made very well."

Fine! Fine. So it turns out that pumpkin beer isn't available year-round because I'm the only person who wants it. Or at least, that's what the experts say. But what about people like me and my friend Kristen, who declares to Bustle that pumpkin beer is "a delicious marriage of liquid bread and cinnamon and nutmeg"? "If I can eat a strawberry in November," says Kristen, "I should also enjoy pumpkin goodness year round. Don't give me any 'harvest' talk — people are eating bananas in Manitoba all year round!" Surely, in a time where ultra-niche products proliferate, someone wants to produce small runs of pumpkin beer year-round? I'll buy some ASAP, I just have these nine crates to get through first.

More like this
Starbucks Released New Menu Items For The Summer
By Emma Garza
A Beginner's Guide To Drinking Whiskey
By Alexis Morillo
The Summer Solstice Spiritual Meaning, Explained
By Jessica Booth and Brittany Beringer
11 Podcasts About The History Of Juneteenth
By Emma Carey
Get Even More From Bustle — Sign Up For The Newsletter