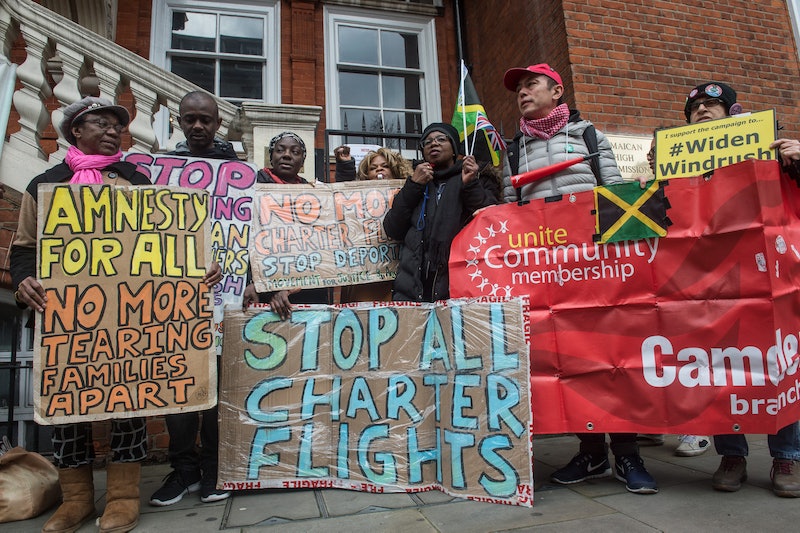 The Windrush Scandal was a dark time for this country; destroying lives and ripping families apart, and yet, we’re here again. Earlier this week, the Home Office went ahead with a deportation flight to Jamaica, despite a last-minute court ruling. Seeing these events unfold have left me feeling like this country is making a crystal clear judgement on who belongs here and who doesn't. I can’t help but think black and brown people’s citizenship in the UK will always come with a caveat, and could be stripped at a moment’s notice.

My grandparents are part of the Windrush generation. They immigrated here as young adults and devoted their working lives to this country’s economy. They are the reason I have the life I do today. I was born and raised here, and it remains the only place I have ever called home, but still, I don’t always feel like I truly belong.

The fact that the flight took off in the first place – before the Lessons Learned Review of the government’s previous mistakes has even been published, let alone considered – is terrifying and sets a dangerous precedent. Some detainees didn’t even have access to legal advice (which they are entitled to) due to known faults with phone masts by detention centres. It leads me to question who gets to be a citizen? Do black lives matter at all?

Over 170 Members of Parliament sent a letter to the Prime Minister against the planned deportation, but the Home Office stood its ground, stating the charted flight was “specifically for deporting foreign national offenders. Those detained had been convicted of manslaughter, rape, violent crime and dealing Class-A drugs,” the statement read. As if to say that this decision was taken to keep the public safe, and British citizens don’t also commit these crimes.

As with the Windrush Scandal before it, the individuals on that flight are being ripped away from their families and home, effectively being banished to a country they have no real ties to and haven’t lived in since childhood. For me, it illustrates how little the UK seems to care about people who look like me.

Beyond the cruelty and trauma of deportation, this is quite literally a death sentence for some. Not only does Jamaica have the second-highest murder rate in the world, but there is already a precedent for men deported from the UK being murdered there, as per The Guardian’s report last year.

For me, it illustrates how little the UK seems to care about people who look like me.

For Akeem Finlay, 30, that fear is even more real. The father of three, with a fourth on the way, is among those facing an enforced return to Jamaica this week following a GBH conviction. His cousin, Dewayne Robinson, was murdered in 2018 after being deported to Jamaica himself. Another cousin of Finlay’s met the same fate. “The men involved in the murders of my cousins have warned our family not to return to Jamaica or we will be murdered too,” said Finlay. By putting him on that flight, this country is sending Finlay to his death.

Of course, some of the crimes are abhorrent and nobody is denying that, but it begs the question: what is the point of going through the judicial system, serving time, doing the rehabilitation process, just to be punished again and again? Is this system even working? And who does it really serve? Should we not be getting to the root of the problem – why people break the law in the first place – instead? Take Tayjay Thomson, 24, who is also rumoured to have been on the flight. He came to the UK aged five and fell victim to county lines grooming. Should that not be taken into consideration, too?

They aren’t all clear-cut cases, but we cannot paint people with one wide brush stroke as the Home Office is doing. Not everyone on the flight is dangerous or violent, and to say they are is disingenuous. Labour MP David Lammy said that of the original 50, he knew of eight deportees convicted of non-violent offences, and nine of drug offences. How many others have similar stories?

Black men are 26% more likely than white men to be remanded in custody. As the Lammy Review published in 2017 concludes: there’s an “overt racial prejudice in the criminal justice system.” It all feels like favouritism. Who gets to be a “good” immigrant and who gets to be a “bad” one? Sir Kenneth Newman, former commissioner of the Metropolitan police reportedly said Jamaicans were “constitutionally disposed to be anti-authority.” Jamaicans have a history of being stereotyped as troublemakers, criminals, and unruly; what Dr Joy White calls “an ongoing narrative.”

Which countries get a pass from the Home Office and which don’t? As Labour leader Jeremy Corbyn put it: “If there was a case of a young white boy with blond hair who later dabbled in class A drugs, and conspired with a friend to beat up a journalist, would he deport that boy? Or is it one rule for black boys from the Caribbean and another for white boys from the United States?”

It’s disheartening to be overlooked, underappreciated and treated as disposable by a country that was built off the back of our ancestors. Has the government not learned? Human beings aren’t “illegal”; people’s lives are worth more than some paperwork. Those who have lived in the UK their whole lives shouldn’t be ripped away from everything they know at a drop of a hat. I can’t lie, this has made me even more worried for the future of people like me in this country.

More like this
Watch Jacinda Arden’s Devastatingly Honest Resignation Speech
By Sam Ramsden
Gen Z Are Twice As Likely To Identify As Queer, According To New Data
By Sam Ramsden
Here’s Where The NHS Nurses’ Strike Currently Stands
By Sophie McEvoy
Twitter Has *A Lot* To Say About The "Single Penalty”
By Sam Ramsden
Get The Very Best Of Bustle/UK
Sign up for Bustle UK's twice-weekly newsletter, featuring the latest must-watch TV, moving personal stories, and expert advice on the hottest viral buys.