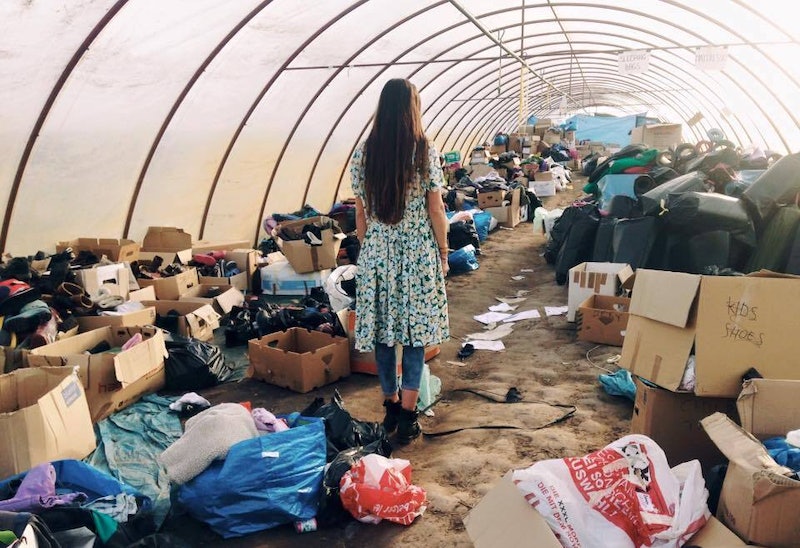 In 2015, Jaz O’Hara travelled to the refugee camps in Calais, determined to see beyond the headlines referring to them as “the jungle” and the people living there as “swarms.” O’Hara wanted to understand what refugees were really going through, and her experience doing so inspired a Facebook post that changed the course of her life. Below, she explains what pushed her to set up The Worldwide Tribe community and start a podcast, and how her foster brother has been her biggest inspiration throughout everything. This interview with O’Hara, as told to Alice Broster, has been condensed and edited for clarity.

It’s been a strange couple of months. I don’t spend very much time in London despite living here normally. My job involves a lot of travel. I’m the founder of The Worldwide Tribe, which is an online community that supports refugees. The coronavirus pandemic has been such a difficult time but it’s given me an opportunity to share more incredible stories from people who have gone through migration and highlight that, while self isolation may not be ideal, it's actually somewhat of a privilege. There are some people who simply do not have that option, and therefore risk getting sick. It’s taken a lot of adapting during COVID-19, but that’s what The Worldwide Tribe has done since the beginning.

It’s wild to me to think that it’s been five years since I visited the Calais camp for the first time. In 2015, my parents were going through the fostering process. They’d always had four kids at home and, as it got closer to my youngest biological brother's 18th birthday, I think they were worried about having an empty house.

As the fostering process progressed, it looked more likely that social services would match them with a refugee child. They live in Kent and lots of children were arriving alone at the border of Kent via Calais. I was working in the fashion industry and had started to notice the media coverage of the refugee crisis. The Calais camp was being called “the jungle.” No one was talking about the human aspect of these camps and I didn’t understand why my new little brother or sister would be arriving without a parent or guardian and what they would have gone through.

What I was met with at the camps was a very different situation than what I’d read about. People were so welcoming, loving, and kind.

I made the trip to the camp before my first new foster brother arrived in England. I thought I might be able to find out some useful information. What I was met with was a very different situation than what I’d read about. People were so welcoming, loving, and kind. I went back home and wrote a Facebook post describing my trip, letting people know I’d be going back, and that people needed warm clothing, tents, and sleeping bags. It got so much traction and that was really the beginning of The Worldwide Tribe.

The community I set up has grown and evolved over the years. In the beginning, we wanted to focus on basic needs. People needed shoes and warm clothing. We had warehouses where people could drop stuff off in London and we could take it to Calais. However, I noticed that people over here were asking the same questions about the camps that I had before my trip in 2015. That’s when we started to focus on storytelling. There were so many assumptions in the UK about the refugee camps so we documented as much as we could and made a short film called Jāṅgala to make clear who was living in the camp in Calais, why they were there, and what they wanted to rest of their lives to look life.

I’ve met some incredible people through the work I’ve done but my first foster brother, Mez, has always been a massive inspiration for me.

On World Refugee Day in 2019, we launched the podcast. I love a podcast and when you’re posting on social media, you’ve got people's attention for a couple of minutes at the most. I wanted to give more time to people's stories. I’m a member of the Amnesty International Collective as an advocate for refugee’s rights, which has fed into our work at The Worldwide Tribe, including with the podcast, and has led me to meet the most amazing people.

Recently, I spoke to Sarah Mardini on the podcast. She was the first female Syrian volunteer to go back to Lesbos to help refugees who were arriving. She translated for people and was one of the humanitarians that were arrested by Greek authorities to be made an example of. They felt the help refugees were receiving was encouraging more to come to Greece. She’s 25 years old and now faces 26 years in prison. Amnesty is fighting for her freedom. I also spoke to her sister Yusra who is quite well known as she had to swim for her life with her sister after their boat capsized between Turkey and Greece. One year later she competed as a swimmer in the 2016 Rio Olympics.

I’ve met some incredible people through the work I’ve done but my first foster brother, Mez, has always been a massive inspiration for me. He’s shared his story on the podcast and comes into schools with me too. He left Eritrea when he was 12 to flee compulsory military service and spent around nine months making his way to the UK. He crossed the Sahara desert where he didn’t eat for 15 days, his boat capsized while he was crossing the Mediterranean, and he lived in the Calais camp. He hid under the Eurostar Train just to make it to the UK and now he lives a very normal life as a teenage boy in England. He’s a Domino's deliveries driver and studying hard so he’s very busy at the moment, as you can imagine.

Considering everything that's going on in the world right now, everybody can find something to do to help those in need.

The Worldwide Tribe is all about amplifying voices that often go unheard. What we do has looked different during COVID-19. I’ve started a new project with my housemates called People of the Pandemic and we’ve spoken to the key workers who've kept society going. Over the last few weeks that’s included documenting the Black Lives Matter movement.

Considering everything that's going on in the world right now, everybody can find something to do to help those in need. Donate and if you can. If you can’t, sign petitions, and share things on social media. These are all actions that contribute towards a movement. Not everyone has to be on the ground volunteering; your skills may look different. Reading books, watching programs, and educating yourself is a really good place to start.

The Worldwide Tribe podcast is available to stream on all major platforms, including Apple Podcasts and Spotify. Season three will start on June 20 with episodes airing fortnightly. Keep up to date with O'Hara and @theworldwidetribe on Instagram.