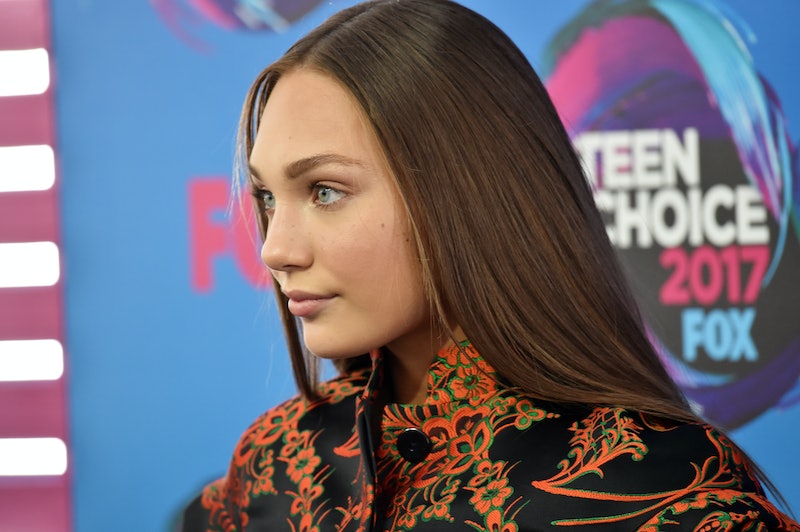 When Dance Moms first premiered in 2011, the world was introduced to the then unknown Abby Lee Dance Company and a group of talented young dancers. However, there was one in particular who stood out for her natural talent: Maddie Ziegler. The 14-year-old left the ALDC and the Lifetime series in 2016, and now she is one of the most famous young celebrities in the U.S. But that's not actually what she wants. Ziegler doesn't want to be called a "celebrity."

"I don’t consider myself, like, 'Oh, I'm a star, a celebrity, or famous'. I am just a girl from Pittsburgh," she says candidly when we speak via phone in late September.

Ziegler — whose latest gig is starring in the video for Sia's "Rainbow" from the My Little Pony: The Movie soundtrack — obviously isn't the only one who has made it big at a young age. There are those of the past, including the Brady Bunch kids, Home Alone's Macaulay Culkin, the stars of Full House, and the Harry Potter cast. More recently, there is Jacob Tremblay, who made his way to the spotlight after starring in Room with Oscar winner Brie Larson; and the kids in the Stranger Things cast, who can't go anywhere without being recognized for their roles in the beloved Netflix series.

While some of those young people may love being called celebrities, Ziegler sees herself purely as a teenage girl, who is working to make her dreams a reality.

"I don’t think it's fair for kids to say, 'Oh, I’m famous, I’m a celebrity,' I find that really rude and it seems like they have a big head," she says. "I never want be a brat or be stuck up or snobby."

She's proven herself time and again to be an extremely hard worker, who's talent never ceases to amaze anyone who watches her. But dancing in Sia's music videos and being featured on Dance Moms isn't all Ziegler does. As Pretty Little Liars fans know, she appeared in a Season 6 episode, where she showcased her dancing abilities in one of Spencer's nightmares. She was also in the 2017 movie, Book of Henry, alongside Naomi Watts, Sarah Silverman, and Tremblay. In August 2016, it was announced that she is writing four books, including a memoir, titled The Maddie Diaries, and three young adult novels. The first book of the trilogy, The Audition, will be released at the end of October. And if that wasn't enough, in 2016, she also launched her own clothing line appropriately called "Maddie."

Out of all of her projects, working alongside Sia is one of her proudest accomplishments, so much so that's it's starting to feel almost natural to create together.

"It doesn’t really seem like work anymore when we’re together," she says. "It means a lot to me, because I thought that after I did 'Chandelier' I would never do anything for Sia again ... The fact that we’ve continued this journey together for almost four years now is insane. I’ve loved getting to grow as a person."

And her most recent project, dancing for Sia in "Rainbow," is "one of my favorites I've ever done" in particular because of the song's message. "I think this whole song is just about going for your dreams and just believing in yourself," she says. "If you don’t believe in yourself, then nothing will happen. It’s about basically knowing you can do something, having a big heart, and going for it."

She also treasured the pure joy of the shoot itself. "I got to play in water the whole day and I got to go on a harness. It was so much fun in getting to just be a kid and play around," she adds. Her response serves as an important reminder: Ziegler is a kid, who happened to find fame at a very young age.

It wasn't until Dance Moms debuted six years ago that Ziegler found herself at center stage. She was just a child taking dance classes in western Pennsylvania when her mom, Melissa Gisoni, was approached by a producer and friend of the family casting for the show.

Though Gisoni was also on the receiving end of much criticism from the other dance moms during her time on Dance Moms, and some critics even think of Gisoni as a "stage mom," who was determined to make both herself and her children famous. The way she tells it, the truth is quite the opposite.

Back in 2016, she countered the claims in Cosmo, echoing her daughter's own words: "Literally, I'm just a mom from Pittsburgh. I was never a stage mom and my daughter always tells people that," she said, adding that she wasn't someone who "pushes their kids" to be perfect. "I never thought about Maddie being famous. I never wanted to be on TV and I never want to be on TV again."

Yes, Ziegler was on a TV show and is now pretty famous, but there's one thing people should keep in mind: She is still very young and finding her way, like every other kid her age — something she uses to her advantage.

"It means the world that I am an influence to a lot of girls and boys," she says. "I just want to continue making this statement to girls — and boys — that you can do it and if you just believe in yourself you’ll achieve whatever you put your mind to."

Ziegler might be "just a girl from Pittsburgh," who refuses to be labeled a "celebrity", but she will absolutely use the opportunities presented to her to inspire others.