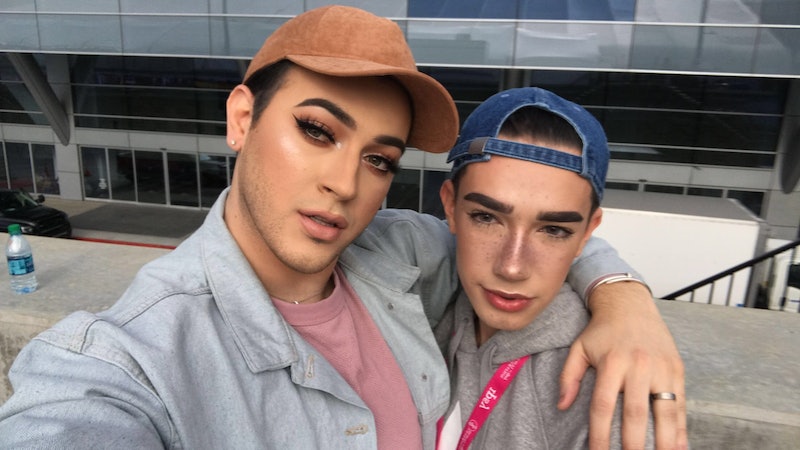 Over the weekend, one of the biggest beauty conventions in the country was held in Los Angeles, and many people's favorite beauty bloggers were in attendance. While seeing everyone together was exciting, Manny Gutierrez and James Charles' Generation Beauty appearance takes the cake. If you're not a total beauty junkie, these names may only sound vaguely familiar to you, but they are the two faces of Maybelline and CoverGirl respectively. They're the very first male faces to represent major cosmetics brands, and it's a joy to see. What's even better, though? Seeing them together.

This weekend both Gutierrez and Charles attended ipsy's Generation Beauty conference — one of the biggest makeup expos in the country. While stars like Desi Perkins and and NikkieTutorials were also in attendance, it was seeing Charles and Gutierrez together that inspired many of those who watched the social media feeds of their favorite YouTubers or saw images online. The two men's positions as beauty ambassadors for two of the largest beauty brands in the world is inspirational for other men wishing to get involved in the cosmetics industry. The two trailblazers posing together was just further proof that times are changing for the better, and that the makeup industry is moving in a more inclusive and diverse direction.

The bold decisions to feature male makeup artist as beauty ambassadors hasn't come without criticism. Conservative blogger Matt Walsh — a writer with Glenn Beck's The Blaze — condemned the choice and insinuated via a tweet that Gutierrez's father was not a strong enough presence in his life. Gutierrez's father — who refers to himself as Manny, Sr. — was quick to fight back against the claims in a show of love and support that has been echoed worldwide by fans of his son.

Gutierrez will always have his dad as his number one fan, but it looks like he and James Charles are fans of one another as well, and what's better than seeing two major beauty-industry faces supporting one another?

Seeing these two together is just a reminder that inclusive beauty is the way of the future. With Charles being named one of Forbes 30 Under 30 and Gutierrez's career as a beauty ambassador exploding, it's just beginning for these two — the sky is the limit!

I can only hope that fans of Gutierrez and Charles continue to see them every where. From beauty expos to new campaigns, they're nothing short of an inspiration together or apart.