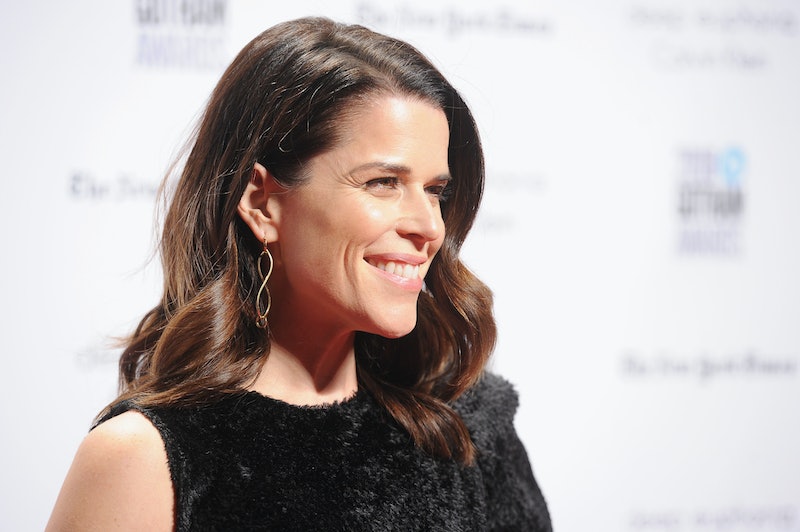 It's been quite some time since the world has seen Neve Campbell on the big screen, and with the July 13 release of Skyscraper, the Scream star will be making a huge comeback. With the success of the 90s/early 00s thriller franchise, however, one may be wondering why Campbell hasn't been working red carpets throughout the years. According to a recent Late Night With Stephen Colbert interview, the reasons behind why Neve Campbell left Hollywood after Scream 4 are so understandable.

Campbell stopped by Colbert's late night show to talk all things Skyscraper, July 10, in which she's starring opposite one of the biggest names in Hollywood right now, Dwayne "The Rock" Johnson. The action-packed thriller hones in on the life of a former FBI agent and war veteran, played by Johnson, who's framed for setting ablaze one of the tallest and safest buildings in China. And besides clearing his name, Johnson also has to save his wife and children who just so happen to be right above the fire line. Campbell plays Johnson's wife, and after premiering a clip of her kicking some serious butt in the film while visiting Colbert, it's clear that she's right in her element.

So, what has been stopping Campbell from invading Hollywood with her talent over the past decade? When giving her explanation to Colbert, the said, simply, "I needed a minute."

"In my 20s, it all hit so fast and so big that it was a little overwhelming. Wonderful, obviously, and I'm very grateful for it, but it got to a level, also, where the kinds of things that I was being offered were not the things I wanted to do. I was constantly being offered horror films, because I was known for horror films, or bad romantic comedies."

In addition to reprising the role of Sidney Prescott in all four of the Scream films, Campbell was also widely known for her roles in the sitcom cult-classic Party of Five, and '90s sensation The Craft. For years, the Canadian actor was, and arguably still is, one of the most recognizable faces in Hollywood. But for Campbell, she didn't really like being catapulted into stardom so quickly. And so, once becoming uninterested by the monotony of romantic comedies and horror projects coming her way, she decided to venture off to London — where she has been able to live a pretty normal life.

"It's just very different there. I literally did not get bothered once. People would ask me what I did for a living. I'd say, 'I act' and they go, 'Oh, OK.' It was so lovely."

But, being across the pond didn't stop Campbell from working in Hollywood, however. According to her IMDb page, the actor has been working in House of Cards since 2016, and even had a short stint on Grey's Anatomy in 2012. Along with acting, Campbell has also stayed pretty busy with her family life, being a mom to two children — a six-year-old son named Caspian, and a baby boy named Raynor.

While catching up with E! News about her new action-filled role, the talent dished a bit about how being a mother has influenced her acting — especially in a movie as intense as Skyscraper. Campbell said, "For me, just to imagine anything happening to my kids, that sort of mama bear thing comes up in me and it's very easy to play a role like this." And after witnessing Campbell's character going to the ends of the earth to protect her two children in the Skyscraper clip, there's no doubt that this particular role wasn't meant for her.

Seriously, here's to hoping that Campbell refrains from taking anymore lengthy hiatuses in Hollywood, because she'll certainly be missed.