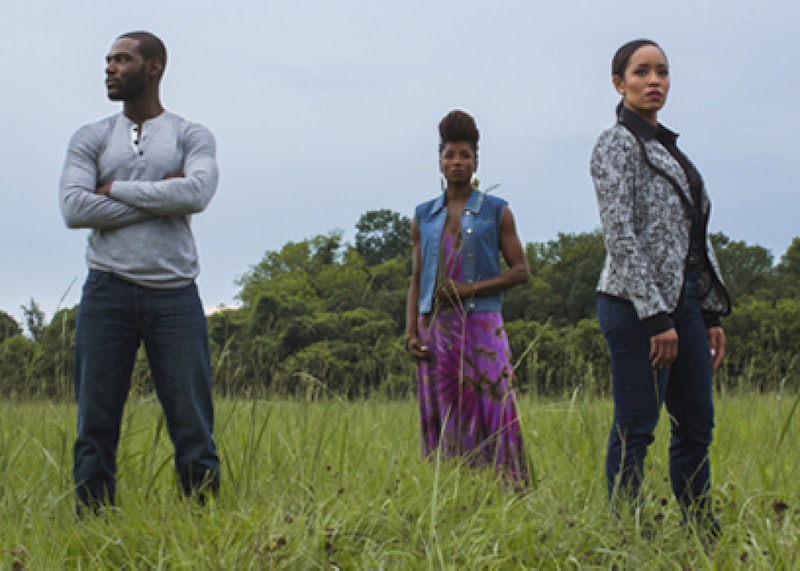 Television is more diverse than ever before with a plethora of worthy shows demanding your attention, but the one show feminists should be paying attention to is Queen Sugar. Tucked away on Oprah Winfrey's OWN, a channel that is quietly becoming a destination for prestige dramas, Queen Sugar tells the story of three adult siblings brought home by the death of their patriarch to run the family's sugarcane farm in Louisiana. There's Nova, the eldest daughter and a passionate activist; Charley, a sports manager with an eye toward building an empire out of their father's ashes; and Ralph Angel, a single father who sees the farm as his second chance after being released from prison.

The series is a family drama through and through, with romance, parenting issues, and sibling clashes woven into the narrative, but don't be fooled. You have never seen anything like Queen Sugar before. Based on a book written by Natalie Baszile, and created by acclaimed director Ava DuVerney, the first season was directed entirely by women (and Season 2 will be as well). Both in front of and behind the camera, diversity is a priority for DuVernay and her team. This is the story of a black family living in the deep south, and the show never backs away from the reality of their struggles, their triumphs, or the conflicting reasons they return to their family home.

All too often, feminist TV shows fail in the area of intersectionality. White feminism is not the only kind of feminism there is, and seeing not only nuanced portrayals of black women, but also a male character who breaks down stereotypes about black masculinity is vital to the TV landscape. Throughout the first season, viewers were allowed to see Charley be entirely unapologetic about her ambitions, while also defending sex workers from men like her lecherous husband by wielding her power and influence. Meanwhile, Nova risked everything to expose corruption within the police force, even as she was carrying on an affair with a white police officer she loves.

Then there's Ralph Angel, the youngest of the siblings, and his father's only son. Watching him attempt to define himself as something other than an ex-con, and aching to prove himself to his sisters, to his son, and to the world, is at once powerful and eye-opening. The way each of the siblings finds their power as they return home, even as varying institutions and people try to strip it from them, is a maddeningly slow, but worthy process.

Their story will be unfamiliar to many viewers, and that is exactly why feminists need to see it. The story of the Bordelon family is one of three very different siblings navigating a world of racism, sexism, class conflicts within their own family, and familial loyalty in the face of personal desires. It is a riveting and original story, guided by people of color and women, who are so often denied jobs in Hollywood in favor of white, male perspectives.

There are no arbitrary limitations placed on the show's characters. Sex scenes are never shied away from, and none of the characters slide into Hollywood's preconceived notions about who or what black characters can or should be. This is story about family loyalty, about how meaningful it is to this family in particular to own the land on which their farm sits despite the different paths they have taken in their lives. They understand what that ownership meant to their ancestors and to their father. Although their ideas on how to keep the farm thriving differ, the pride of knowing this land is not just their birthright, but their history bonds them.

Queen Sugar has been praised by fans and critics alike, and yet it is still flying below most viewers' radar. It has garnered five nominations at this year's NAACP Image Awards, and the series recently won Best Drama at the AAFCA awards. This is a show committed to showcasing feminism in all of its complex, intersectional glory, while telling the stories via the talents of female directors. Don't simply tune in because it is diverse though, tune in because this is a series redefining the types of stories that can be told on TV and who is allowed to tell them.

To watch Queen Sugar is to see all tenants of feminism play out onscreen as an addictive, brilliant family drama draws you into its unique world.

More like this
Ozzie’s Coming Out Scene With Kitty On 'That ’90s Show' Has Twitter Sobbing
By Brad Witter
Helena Bonham Carter Doesn't Think 'The Crown' “Should Carry On"
By Sam Ramsden
24 History-Making Black Women You Probably Didn't Learn About In School
By Ayana Lage and JR Thorpe
25 Inspiring Quotes From Black Women To Celebrate Black History Month
By Kyli Rodriguez-Cayro and JR Thorpe
Get Even More From Bustle — Sign Up For The Newsletter
From hair trends to relationship advice, our daily newsletter has everything you need to sound like a person who’s on TikTok, even if you aren’t.