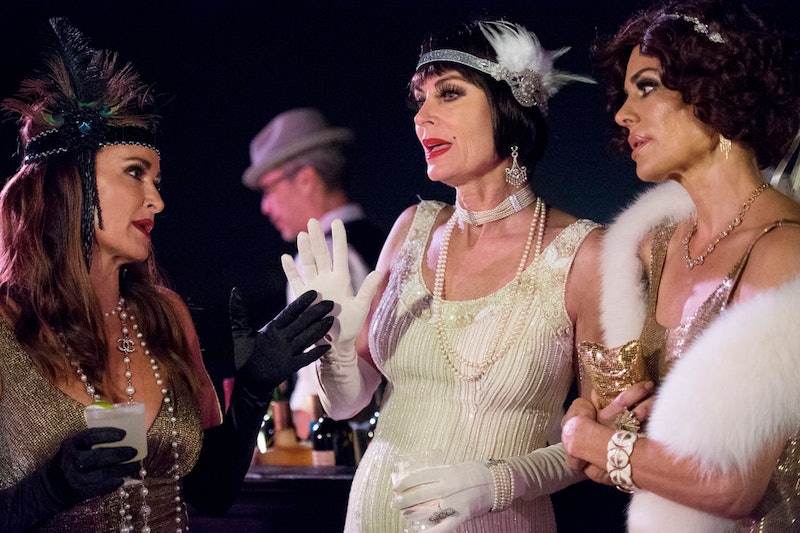 Even though there are numerous series in the Real Housewives franchise, I often find myself escaping into the blinged out world of The Real Housewives Of Beverly Hills. The glamorous gowns, exclusive parties, hair-raising drama, and all around fabulousness are envy-inducing indeed. However, as a loyal viewer, naturally I'm truly drawn to each woman's propensity for scrapping it out, especially with the newest cast members. It boggles my mind that each year a Joyce Giraud or a Dorit Kemsley actually believe they can saunter on screen dripping in couture and oozing elegance without expecting someone's perfectly manicured claws coming for them within the first 10 minutes of stepping on Rodeo Drive. God bless 'em! I live vicariously through their fantasy worlds, while cackling to myself at their boundless pettiness.

But what elements truly make for a five-star franchise? Each iteration of Real Housewives has its fair share of hoopla, shade-throwing, glitz, glam, and fighting. However, the ladies of Beverly Hills are in a class all their own because their luxurious lives are overshadowed by their eccentric personalities. (You guys do remember Carlton, right?) And need I remind you, we wouldn't have the shining spinoff Vanderpump Rules without RHOBH!

Let's look at all of the reasons why The Real Housewives of Beverly Hills reigns above all the rest.

The introductions to the the cast members of RHOBH are always clever, catchy, and right on the money. Take Eileen Davidson's tagline above, for example. She tells you who she is while delivering just the right amount of snark. From the beginning, I could tell she was ready to rumble with the big dogs.

"And the Oscar goes to..." RHOBH is never without drama. But what would you expect from a cast made up of soap opera actors, models, and entertainers?

Despite the drama they cause or endure, the Real Housewives of Beverly Hills always rise above... but can't resist reminding you of how much better they are than their equally dramatic counterparts.

Each season, there always seems to be a Housewife who throws the rest of the ladies for a loop. From Brandi Glanville to Erika Girardi, I can't get enough of watching their unapologetic personalities take over. The fact that Dorit is still reeling from "pantygate" shows she may be too much of a square to roll with Erika's circle.

From Lisa Vanderpump calling Adrienne Maloof "a moody old cow" to Camille Grammer dubbing Kyle Richards' pal Faye Resnick "morally corrupt," I don't know about you, but I can learn a thing or two about comebacks from these women.

Whether the Housewives are drinking chardonnay, rosé, or Moët, wine never goes to waste in Beverly Hills... even if it's being tossed in someone's face!

With Season 7 well underway, I'm already sensing a storm brewing between Erika and Dorit, as well as a possible makeup between Lisa V and Eileen. What I know for sure is that I'll be watching!