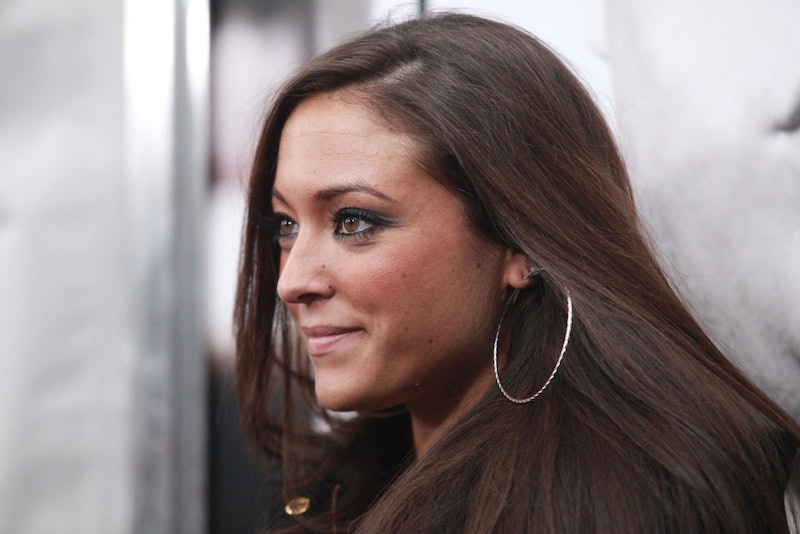 Look, just because she skipped the ceremony, that doesn't mean there's any sort of negative ... situation to dissect here, OK? (Pun intended.) In fact, the reason Jersey Shore's Sammi didn't attend The Situation's wedding, as Us Weekly reported, is totally reasonable.

When Mike "The Situation" Sorrentino got married to Lauren Pesce on Nov. 1, almost all of his reality TV costars were in attendance. Jenni "JWoww" Farley was there, as was Nicole "Snooki" Polizzi. Deena Nicole Cortese and Angelina Pivarnick were there, too. Paul "DJ Pauly D" DelVecchio, Vinny Guadagnino, and Ronnie Ortiz-Magro were all groomsmen for Sorrentino's big day, but where was Sammi "Sweetheart" Giancola, you ask?

Well, when asked by Us Weekly about Giancola's absence, Sorrentino replied, "She was invited [and] she sent a gift, a very heartfelt, sweet gift." Aww. OK, so it's not like she straight-up didn't get invited, or just like, snubbed the event altogether. The reason she decided to skip the wedding, Sorrentino told the publication, was likely because "the cameras were there, she opted not to come."

Ah, yes. That makes total sense. Giancola didn't want to participate in Jersey Shore: Family Vacation, so if there were going to be a bunch of reality TV-style cameras around at Sorrentino's wedding, it's understandable that she'd opt out of that, too.

Even so, it must have been a bummer for Sorrentino and his other Jersey Shore castmates to not have Giancola around to celebrate with. It's been nearly a decade since the show first aired, and they've all seemingly become a pretty tight-knit family.

As a matter of fact, Sorrentino's new wife even said so much herself. Pesce revealed to Us Weekly that both Farley and Polizzi's 4-year-old daughters — Meilani and Giovanna, respectively — were flower girls in their wedding because "they're like nieces to us," she said.

Despite Giancola's absence, it seems as if the bride and groom had a beautiful day with the rest of their friends and family. "There were no issues," Sorrentino told the publication. "Everyone was so happy, everyone was having a good time, everyone was dancing."

"I'm on stages in front of crowds, I do motivational speeches on a monthly basis, but on the day of my wedding, the whole day I was trying to gather my composure from just breaking down from happiness. It was just really beautiful."

At the beginning of October, Sorrentino was sentenced to eight months in prison after pleading guilty for tax evasion. Shortly thereafter, the star announced that he and Pesce — who got engaged in Miami on Valentine's Day this year — had decided to go ahead and tie the knot before he's forced to start serving his time.

"#Thehitchuation is happening November 1st, 2018," Sorrentino wrote on Instagram. "I will be marrying @lauren_pesce My rock , my best friend, my better half & my soul mate . You are my everything & I am so excited to call you Mrs Situation #gymtanlaurens."

According to Us Weekly, Sorrentino won't have to surrender himself until around Jan. 15, 2019. That means that from now until then, all they have to do is open all their presents (Giancola's included), enjoy their newlywed life, and #gymtanlaurens.