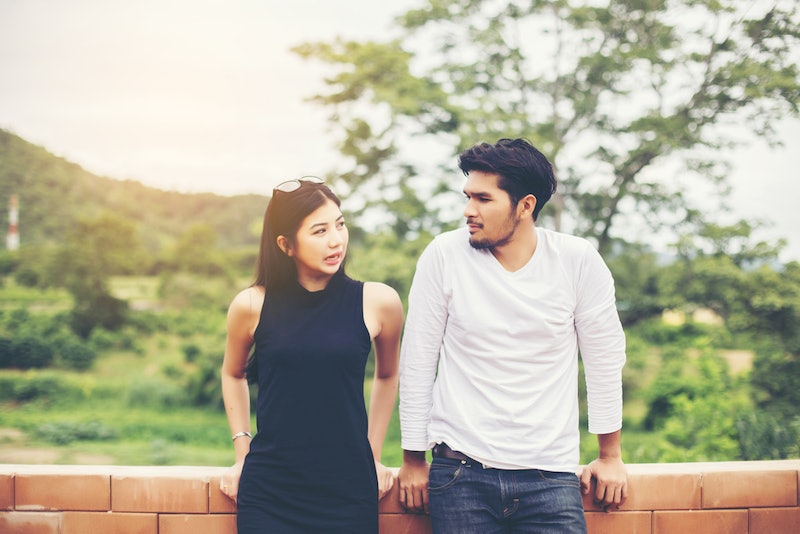 Once you've enjoyed nights out on the town, spent weekends cuddling on the couch, and talked about how much you like each other, it can come as quite a shock when someone says they aren't ready to date. "What do you mean you aren't ready to date?" you may say to yourself, mostly out of frustration, but also a slight sense of a rejection. "Wasn't this heading in a good direction?"

It can be tough to understand what's going on, especially if you were hoping to take the relationship to the next level. But there are quite a few possible explanations, starting with a confusing mix of emotions.

"Initially, it's easy for attraction and excitement to take over when you're first meeting someone and feel a genuine spark," Kim Egel, a licensed therapist who helps people with relationship issues, tells Bustle. "After all, an initial magnetic connection is hard to find and resist. We can get caught up in our 'humanness' and ... the excitement of attraction."

This is when you'll have that "hot out of the gates" feeling, she says, including amazing dates, incredible attraction, fun phone calls, and nights spent talking about the future. But with all that going on, it's easy to see why someone might not have time to check in with themselves or really think things over.

"The initial excitement can mask the deep-seated issues that, perhaps, that individual has not dealt with in terms of blocks to the heart or past relationship wounding," Egel says. They might have a history of toxic relationships, or other baggage they're carrying around. And that's why, seemingly out of nowhere, they'll say they aren't ready to date.

For example, "someone may say this if they realize they jumped into a relationship too quickly, such as after a [recent] breakup," Jenna Ponaman, CPC, ELI-MP, a dating and relationship coach, tells Bustle. "People that aren’t particularly comfortable with being single will often jump from one relationship to the next without ... consideration of what it is they truly desire in a relationship, or simply not give themselves the space to grieve."

It won't be until they begin seeing you as a potential partner that reality sinks in, and they realize it's too much too soon. At that point, it may be best to take them at their word and give them space. With time, they may decide they're ready to move forward, but they'll need to focus on themselves for a while in order to overcome these issues. And that's OK.

Saying "I'm not ready to date" could also mean they're anxious about losing their independence, Lillian Rishty, LCSW, a psychotherapist who focuses on relationships and anxiety, tells Bustle. They may begin to feel trapped or fear giving up their own interests, hobbies, and time. If fear sets in, they may decide bailing is the best and only course of action.

Of course, "in a healthy relationship where each partner is independent outside of the relationship, this shouldn’t be a worry," Rishty says. But you never know what someone's been through, or why they might have these types of concerns. It can help to talk about it, create some boundaries, and see if they'd prefer to take it slow.

For other folks, they may say they aren't ready out of a desire to become their "best selves" before starting a relationship, Rishty says. While that's perfectly fair, it can stem from the idea that a person needs to be alone in order to find themselves, work on their career, or focus on hobbies.

The truth is, "we are always evolving throughout or lifespan, in and out of relationships," Risthy says. It isn't always necessary to be single in order to find yourself, and being in a relationship with a supportive partner can even help a person along their journey. But not everyone feels that way, and it's important to respect that.

Unfortunately, in some instances, this comment can also be a polite way of saying they're no longer interested, Margaux Cassuto, a relationship expert and matchmaker, tells Bustle. Instead of being honest, they may choose to let you down gently by making it more about them, before fading into the distance.

"If this person says they aren’t ready to date because they simply don’t feel the synergy," Ponaman says, "then it’s usually best to wish them well and move on. There is no sense in wasting your time on someone you inevitable cannot make like you. Chances are if they do not feel the spark, you don’t either."

If someone says they aren't ready to date, you can always ask questions, gather more information, and talk about ways to create a relationship that feels good and comfortable for all involved. It's possible they'll be down to take things slowly, or move to the next level in the future. But for the most part, you'll want to look out for your own best interests and believe someone when they say they aren't ready to date. For both of your sake, leave it at that and move onto someone who is.

More like this
Cookie Jarring Is The Dating Term You Need To Know
By Sophie McEvoy
The Best Time To Date After A Breakup, According To Experts
By Bustle Editors
Is It A Rebound Relationship Or The Real Thing?
By Carolyn Steber and Lexi Inks
Are Quality Time & Physical Touch Love Languages Compatible?
By Lexi Inks
Get Even More From Bustle — Sign Up For The Newsletter