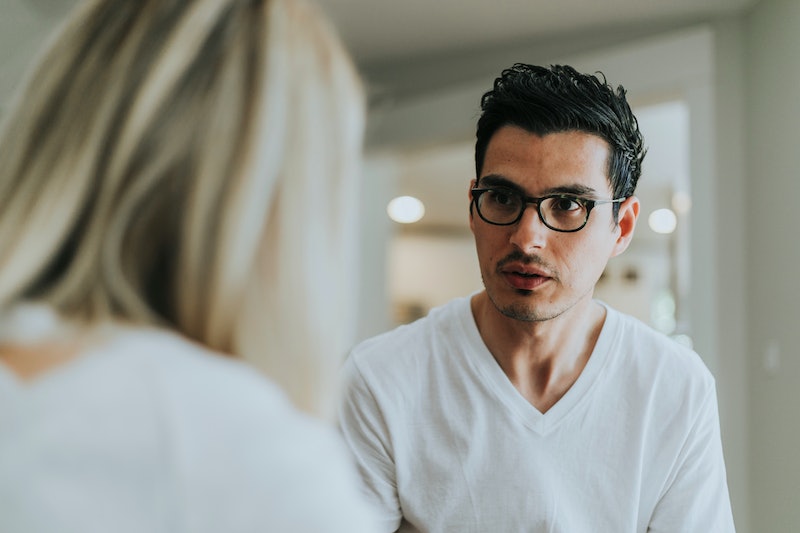 Breakups can go down in a variety of ways. Sometimes they're mutual, sometimes they're sudden, and they're hardly ever a good time. But if your partner comes out of nowhere with the ultra-mysterious "it's not you, it's me" line, it can leave you feeling particularly shocked and bewildered.

After all, it's only natural to want an actual explanation for what went wrong, and sometimes not having one can make the relationship feel unresolved, Amica Graber, a relationship expert for the background checking site TruthFinder, tells Bustle. Plus, it's not uncommon to take a relationship personally. So what's all this talk about it being about them?

Well, "when someone says 'it’s not you, it’s me,' they could be referring to an emotional readiness [that] they don’t have in order to make this relationship work," psychotherapist Devon Jorge, MSW, RSW, tells Bustle. It's possible they realized they aren't fully over their ex, for example, or that they still have a lot of work to do on themselves, before making any commitments. And that's all completely fair.

Or, it could be a cheap — and kind of rude — way of shutting down further discussion. "Someone may use this line when they've made up their mind about ending the relationship and they don't want to talk about it further," Rachel Perlstein, a licensed clinical social worker and owner of InFlow Wellness, tells Bustle. "If it's not you, it's me, then there is less argument or opportunity to explore the differences or feelings."

You can't counter their statement with promises of change, or offer ways to improve the relationship, because they're saying it's not about any of that. By claiming full ownership, it draws a line in the sand and makes it impossible to respond, Perlstein says. If someone is really and truly done, they might employ this cliched technique as a way to sever ties and get out.

Of course, it could also be a way to keep things civil, which is nice in a weird, twisted sort of way. As Perlstein says, it "can signal that the person wants the relationship to end without blaming or personalizing things." By taking all the responsibility, your partner gets to mosey on out of town, without feeling like they pointed any fingers.

And that can alleviate a lot of their guilt, especially if it it really was about you. "Most people are nervous about ending a relationship with someone because we don’t want to cause anyone pain," Graber says. "And the truth can hurt. Saying 'it’s not you, it’s me' is a vague statement that can mean virtually anything. At face value, it sounds better than saying that you want to pursue someone else or you can’t imagine a future with someone."

If this line is cast your way, and you aren't satisfied with these potential explanations, feel free to ask more questions. Keep them to the "yes" or "no" variety, in order to avoid any potential doublespeak, Graber says. And see if your partner is willing to open up. If they can see that the relationship is still going to end, and yet you'd like a bit more info, they may be willing to give you that courtesy.

Unfortunately, you may never get solid answers, or find out precisely why your partner used this line. If that ends up being the case, you just have to take a deep breath, and try to be OK with it. "A really important thing to keep in mind is that, while it can be deeply upsetting to hear someone say this and to get broken up with in general, if the person is not for you, it's best for you to know sooner rather than later," Perlstein says.

They're essentially doing you a favor by cutting ties and moving on, even if they aren't going about it in the most socially graceful way. And what's more, you still get to take a few lessons with you. "We can always learn more about ourselves and our needs if we take the time to reflect," Perlstein says. So even though you might not fully understand what happened, this is your free ticket to move forward, and find someone better in the future.