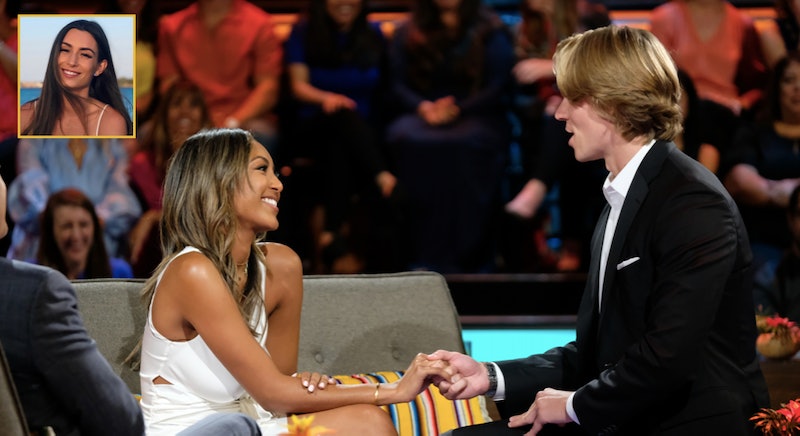 After competing for Nick Viall's heart on Season 21 of The Bachelor, Astrid Loch ultimately found love on Bachelor in Paradise Season 5 with Kevin Wendt. She knows first hand what it's like to weather emotional ups and downs of Paradise, and she's dishing all to Bustle. Read what she has to say about John Paul Jones & Tayshia's Paradise rekindling, Demi & Kristian making franchise history, and more in this week's recap.

“You make me feel like myself, and I didn’t even know what that meant sometimes.” - Chris

All good things must come to an end: We’ve arrived at the Bachelor in Paradise finale. This season truly was like any other when it comes to drama. It made me laugh, cry, and sometimes scream words at my TV my mom really wouldn’t like hearing come out of my mouth. It was an amazing season, and although I’m happy to get back to watching Real Housewives, I will definitely miss watching this cast.

Our final couples remaining are Demi & Kristian, Clay & Nicole, Hannah & Dylan, and Katie & Chris. I know every relationship moves at a different speed, but I do feel as though the connections between Demi & Kristian and Hannah & Dylan are mutual whereas I find it hard to watch Katie and Nicole being so much more into their partners this far into the game.

Things take a turn for the worse when Clay lets Nicole know he doesn’t think Fantasy Suites is a good idea and that he’d rather spend the night apart in order to clear his head. This of course takes Nicole by complete surprise, as this is something she never even thought would be an option for them. It’s clear these two are not on the same page about their relationship, and I wonder if this is due to the fact that they were avoiding having serious conversations until this exact moment. It’s easy to go day by day, drinking free margaritas on the beach, not worrying about the real world until reality hits you in the face when the show comes to an end, and I think that’s exactly what happened to these two.

The next morning, it’s do or die as the final couples are faced with the decision to break up, date in the real world, or get engaged. First up are Clay and Nicole, who went from being one of the strongest couples throughout the season to barely holding on as they meet on the beach. Nicole spills her heart out and declares her love for Clay, but she has one question: "Do you love me? Yes or no?" This might be an unpopular opinion, but is Clay really wrong for not being 100% sure about moving in with someone and getting engaged after knowing them for a little over three weeks? Don’t get me wrong, he DEFINITELY has commitment issues, as we already saw in his relationship with Angela, but I don’t think it’s that crazy of him to want to try things out in the real world before getting engaged.

This is not to take away from Nicole’s decision to walk away from the relationship, because she 100% deserves someone who will make the ocean jealous (whatever that means). At the end of the day, she knows what she wants and she’s recognizing that Clay isn’t able to give her what she needs, so kudos to her for standing up for herself. I know Nicole came to that beach to find love like everyone else, but I have a feeling in the process she found something even more beautiful…herself.

Since the show rushed through these proposals last night, I’m going to as well, but not before mentioning how beautiful they each were. I loved when Chris told Katie that she makes him feel like himself and how genuine Katie’s reaction was to everything he said. I appreciated Hannah and Dylan putting importance on family, because I myself could never imagine getting engaged without my mom's approval. I was holding back tears as Demi got down on one knee (in her fab dress and heels) as she and Kristian were rewriting what the norm is on this show. I just love love… but let’s get to the reunion to discuss everything that's happened since.

First up in the hot seat we have Blake to finally explain his side of the story regarding all things Stagecoach, Birmingham, and the infamous text messages. Somehow I’m left with more questions than answers. Why did he have to go to Birmingham to explain Stagecoach to Hannah? Were they in a relationship? Was there a pact? I’m confused. Overall, I do believe Blake when he says none of this was malicious. I truly believe he got in over his head, got too excited about being the popular kid and getting this kind of attention from girls, and simply got caught with his hand in the cookie jar.

The text messages are a whole other story that includes way too much grey area that makes it impossible to say one person is right and the other is wrong. Do I think releasing the text messages violated Caelynn's privacy? Absolutely, 100%, no questions asked. Do I think anyone would have believed Blake had he not released them? No. Freaking. Way. It’s easy as a viewer to say that what he did was wrong and that we’d never do it ourselves, but I think this situation was a bit more complex than that, and Blake felt in that moment that he needed to defend himself against the lies Caelynn was telling. I am bothered by the fact that it took the entire cast urging Blake to apologize for him to actually do so, and I wish he would have stuck to a simple lesson we learn as kids: Don’t fight fire with fire.

On to some better news… Tayshia and John Paul Jones. I am so happy these two found their way back to each other after the show, because I am obsessed with them as a couple. I have a feeling (speaking from experience) these two will be stronger than any other couple a year from now because they decided to do things their own way. At the end of the day, the show simply brings people together (kinda like a dating service) but it’s up to the people to make the relationships work in the real world. I’m wishing these two the best of luck.

On to some heavier stuff again, boy was it hard to watch Chris and Katie in the hot seat. It’s clear that the communication problems these two had on the beach followed them home. I can definitely relate to Katie when she said she’d hope watching the show back would make her see things more clearly. During our season, I was hoping to find answers about what caused Kevin and I to break up but in the end, but the show was never able to give me those answers — Kevin was. I do wish Katie wouldn’t have exposed their relationship like this in front of an audience and ultimately all of America, because while the show moves on, you’re still the one who's left to deal with your relationship.

Ultimately, the show did bring us two fairy tale endings with Hannah & Dylan and Kristian & Demi. Remember how earlier I mentioned both of these relationships seem mutual? There’s something to be said about both people being 100% in on each other. It makes for a beautiful love story, and I can’t wait to see where these two relationships are headed.

With that, I’m signing off. Cheers to a great season!