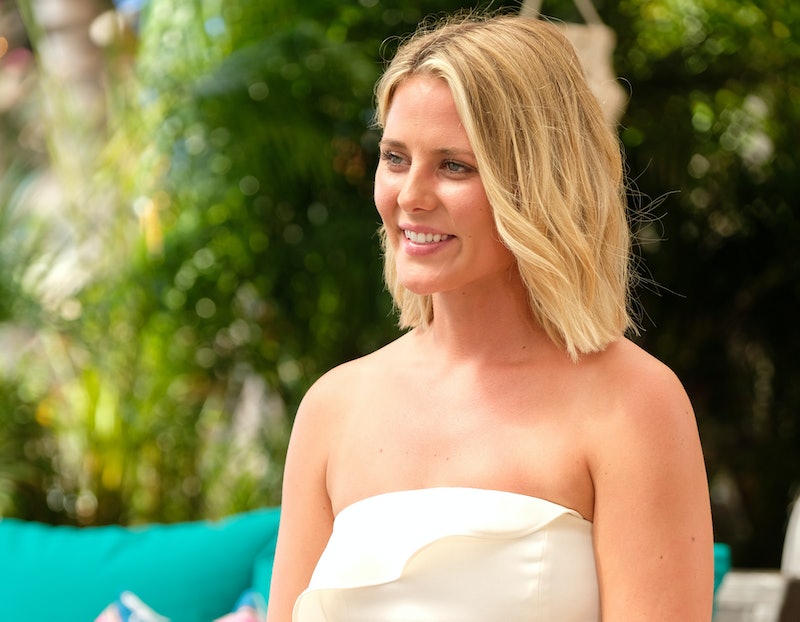 Spoilers for the Bachelor in Paradise finale ahead. Demi and Kristian made Bachelor Nation history by being the first LGBTQ couple of the franchise. And they are continuing to break boundaries after Demi proposed to Kristian on Bachelor in Paradise. In the Season 6 finale, Demi let go of the reservations she previously had by asking Kristian to marry her, and given that LGBTQ marriage just became legal in the U.S. in 2015, Kristian and Demi taking this formal step to commit to one another on national television is momentous.

Out of the four couples left on Paradise, Demi and Kristian had an advantage in some ways since they dated before they came on the show. But they've had to navigate major relationship issues just like everyone else on the beach — all while grappling with being in the public eye. Especially Demi, who talked at length in the final weeks about still feeling insecure about dating openly as bisexual and her hesitation to show PDA toward Kristian. And there were still some concerns ahead of the proposal when Demi expressed feelings of self-doubt and Kristian feared they weren't on the same page. Yet, their sincere and open dialogue about their problems has only made them stronger, as displayed by Demi and Kristian's engagement in the Bachelor in Paradise Season 6 finale.

When they came on the beach to proclaim their love for one another, Kristian said, "Demi, I'm in love with you and I give you my full heart and I promise to protect yours now and forever." Demi responded by saying, "I came here to find myself, but I found myself in you. I love you so much and I'm so in love with you, and I didn't even think it was possible to feel this way about someone."

Demi then got on one knee and proposed to Kristian, who accepted and joined her on the ground. The other engaged couples — Katie and Chris and Hannah and Dylan — cheered for them and came on the beach to celebrate, proving yet again how joyful Demi and Kristian's relationship is. Now, as Kristian pointed out, the only thing missing is that Demi doesn't have her own engagement ring.

At the reunion show, Demi said she moved to Los Angeles to be closer to Kristian. They shared the reasons why they love each other, and the fact that they are still happily together was no surprise for anyone following their social media accounts. But what was a surprise is that Kristian decided to do her own proposal at the reunion show.

Harrison gave Kristian the last word, and she asked Demi to stand up. "I'm so grateful that we went to Paradise and it gave us the opportunity to grow our love for each other. I know that last day in Paradise, that was the best day in my life, and I wouldn't want to do this life with anyone else but you," Kristian said, before asking Demi to marry her.

Demi had said in the hot seat how she always wanted to "celebrate love no matter which way it comes." And by the love that Kristian and Demi share for one another — and the love in the room during their second engagement — it's clear that this groundbreaking reality TV couple is worth celebrating and that Bachelor Nation can't wait to watch their love continue to grow.