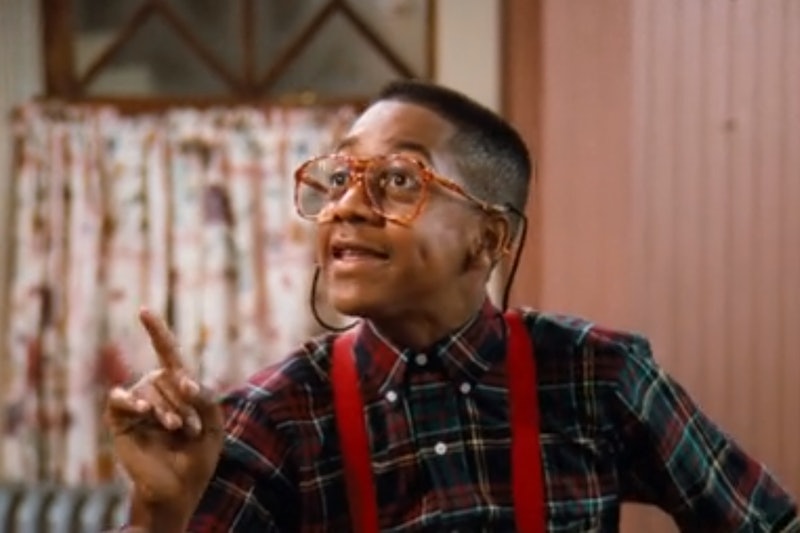 The television landscape has changed drastically since the '90s — especially when you consider just how much TV isn't on TV at all, but rather on the internet. Still, it seems older millennials are drawn to the shows of their youth, and the creators of the TGIF lineup are pretty sure they know why. According to The Hollywood Reporter, during a recent panel at the ATX Festival, Family Matters and Step by Step creator William Bickley, Family Matters star Kellie Shanygne Williams, Boy Meets World actor Ben Savage, and Sabrina the Teenage Witch creator Nell Scovell discussed the enduring appeal of their shows, and why viewers can't seem to get enough of the '90s favorites.

Ultimately, they all seem to agree that it comes down to the gentle spirit of the sitcoms. On shows like Full House and Family Matters, problems are introduced and solved within 30 minutes, and your family is always there to give you a hug at the end of the day. It may not be entirely realistic, but it's definitely comforting, and sometimes that's what viewers crave.

Scovell pointed out that some modern day comedies find humor in cruelty and snark. Meanwhile, TGIF characters tended to be sincere to a fault. "All of these shows, there was a sweetness to them," she said at the festival, as reported by THR. And that sweetness hasn't turned viewers who have grown accustomed to denser programming choices away from watching reruns. If anything, TGIF remains destination viewing for some fans thanks to Hulu.

On Thursday, June 7, Hulu revealed to IndieWire that fans have responded to the addition of the TGIF lineup to their library in a major way. Full House, Family Matters, Boy Meets World, Step by Step, Hangin' with Mr. Cooper, and Perfect Strangers were all added to Hulu in 2017 to coincide with the 30th anniversary of the Full House premiere. Since then, the shows have become a clear hit for the streaming site.

Hulu's data revealed that 60,000 subscribers have watched Boy Meets World in its entirety since it was added to the site's library. Furthermore, fans of Family Matters and Full House typically finish each series in a single month. (Remember, Family Matters ran for eight seasons, while Full House lasted eight.)

What's even more intriguing is that the people speed watching these classics aren't youngsters who have grown up marathoning shows on Netflix. Hulu told IndieWire that the average age of Boy Meets World viewers is 32, while the average for Family Matters fans is 34. Clearly, quite a few adults are enjoying being able to stream the shows of their childhoods whenever they want. And who can blame them?

The TGIF lineup is beloved, but it's by no means perfect. The shows can be dated, especially in terms of representation. And they're far from nuanced. However, that doesn't change how they make viewers feel. Watching an episode of Family Matters can feel like going home, and hanging out with Cory Matthews and Shawn Hunter is like visiting with old friends. The shows are familiar, warm, and, yes, comforting.

Bickley, the man behind Family Matters and Step by Step, said it best. According to THR, he claimed the key to a successful TGIF show was always heart. He elaborated,

"It's not that you can't do shows that are controversial and about characters that aren't so good, but my interest was a family or relationship...where the people made big mistakes, had flaws, but at the heart of them wanted to do the right thing even if they failed, The bottom line was ultimately they wanted to be a good father or a good mother. That was always in my mind. I was interested in doing stories about those people."

TV fans are blessed with an abundance of choices these days. There are TV shows about women's prisons, dystopian nightmares, and hilarious and biting comedies about race, sexuality, and young adulthood that are jaw-droppingly good. The fact that people are still making time for TGIF in an era where there might be more quality shows than ever before says so much about the staying power of Urkel, Cory, and Michelle Tanner.

Sometimes, you want TV to challenge you, and other times you want it to wrap you in a warm hug of nostalgia. When the latter mood strikes, there's still no better place to turn than TGIF.