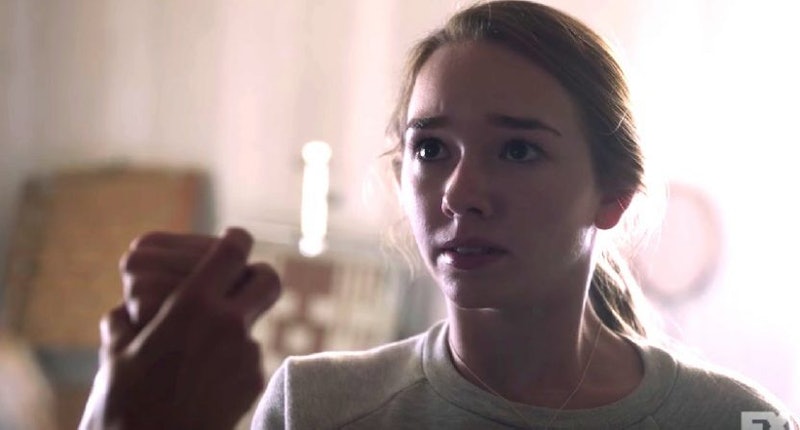 Thanks to the recent election results and transition of power, relations between Russia and the U.S. are a little more tense than usual these days. What kind of dynamic the U.S. may have going forward with the other superpower remains to be seen, but, if, anything, it does make watching the hit drama series The Americans all the more interesting. And now that FX has released a new trailer for The Americans Season 5, it's clear that one of the show's most intriguing characters, teenage daughter Paige (Holly Taylor), might be having a change of heart that would bring a compelling new dynamic to the already-thrilling show.

The older child of Elizabeth and Phillip Jennings (Keri Russell and Matthew Rhys), Paige has always been a little more intuitive and curious than her younger brother Henry. She's been spying on her spy parents since Season 1, and her instincts were proven right when they finally informed her that they were actually Russians working for the Soviet Union, though they avoided using any spy terminology. Being a rebellious teenager, Paige naturally rejected them, and took a 180 degree turn headfirst into religion. But after a traumatic experience last year, it looks like Season 5 might see Paige might embrace her roots, accept her parents, and become the junior Russian spy she was always meant to be.

It took Elizabeth and Phillip by surprise when, in previous seasons, their handler Gabriel informed them that their children were meant to be a part of their mission all along. By having American-born babies, he told them, a whole new set of trained soldiers loyal to the USSR would have easier access and maneuver with less suspicion. Elizabeth was on board, ready to teach her daughter the ropes, but Phillip was more hesitant. But neither opinion mattered once Paige knew the truth and totally freaked out.

By that point, Paige had already began searching her soul and taking an interest in Christianity, something decidedly non-Soviet that her Russian spy parents not-so-quietly frowned upon. What Elizabeth and Phillip found to be a mild inconvenience turned into full-blown danger when Paige confessed to her pastor that her parents were Russians. This led to a lot of drama in Season 4, with Paige suspecting her parents of kidnapping Pastor Tim, and the whole family facing the possibility of defecting back to Russia. But something happened towards the end of Season 4 that gave Paige pause: she saw her mother in action.

When Elizabeth and Paige were approached by two would-be muggers/rapists late in Season 4, Elizabeth did exactly what she was trained for, and used her own bare hands to protect herself and her child. It was a brutal scene, with broken bones, gushing blood, and a shocked Paige watching her mother kill a man. But in the end, after calming down and coming out of shock, Paige seemed more intrigued than terrified.

The new Season 5 trailer shows just how much that intrigue has grown, and though Paige says that she, "can't sleep at night. I have nightmares," it looks like the incident may be what finally turns her back to the arms of her parents. She already got a taste of the spy life when she and her mother ventured to West Germany so that Elizabeth could see her dying mother one last time. Hearing Elizabeth speak Russian and talk about her childhood, Paige was exposed to an entirely new way of life, and her parents' struggle became more real. It gave her a new appreciation that might have helped turn her to her parents' cause.

The attack that Elizabeth prevented seems to have flipped a final switch inside Paige, and if the short snippets of trailer showing Elizabeth teaching Paige self defense are any indication, Paige might be taking her mother's advice when she says, "You have to be willing to do anything to protect yourself." Paige isn't fully aware of the path that's intended for her, but even heading in the direction of embracing her parents lifestyle and mission would make an already compelling character even more so. With a personality that combines Phillip's reluctance and Elizabeth's devotion, Paige might become increasingly conflicted as she learns to fight, send messages, and perhaps become a spy, but that will surely make for some great TV.