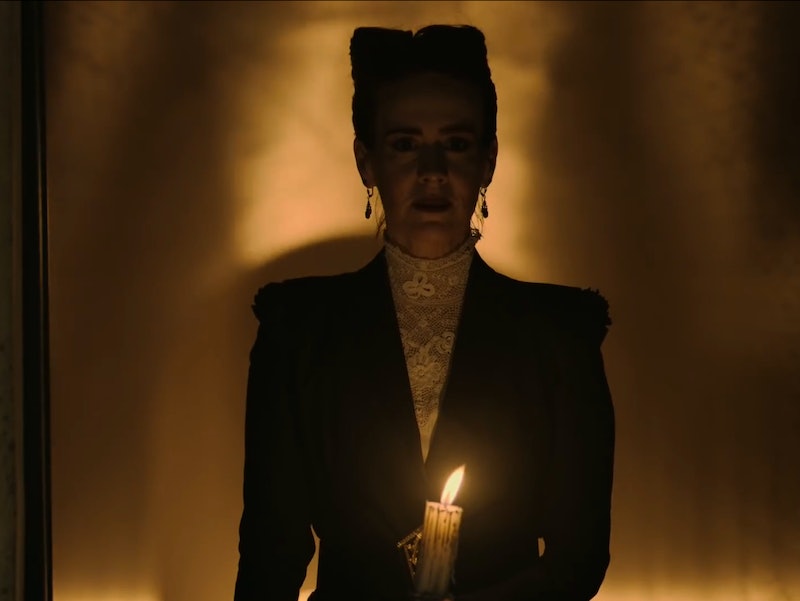 Watching American Horror Story season after season is a little bit like piecing together a giant jigsaw puzzle. The anthology uses Easter eggs and callbacks to hearken back to chilling older seasons, and every new plot detail, uttered line, and eerie song on the soundtrack holds weight. Even in the first episode, the songs in American Horror Story: Apocalypse connect the season to years past, and even potentially offer clues about events to come. Spoilers ahead for Episode 1 of AHS: Apocalypse.

Hopefully by now you know the general circumstances of the season that were outlined in last week's episode. A small group of people have survived a nuclear apocalypse after being whisked away to an air-tight bunker ruled by a mysterious and sinister woman named Ms. Venable.

They either earned a spot by possessing an exceptional genetic makeup —likely to help humanity continue on — or by forking over a huge amount of cash. At the end of the season premiere, it's about 18 months since the bombs fell, no escape from the strict rule of the bunker is in sight, and things are beginning to get even weirder. The creepy tunes making up the soundtrack, especially in the back half of the episode, make things all the more unsettling.

The first song viewers hear inside the bunker is the Carpenters' "Calling Occupants Of Interplanetary Craft." Evan Peters' character immediately complains that it's been playing on a loop, and the song definitely has a dreamy, Rocky Horror Picture Show vibe that's enough to put anyone on edge given the circumstances.

"Calling occupants of interplanetary, most extraordinary craft. You've been observing our Earth, and we'd like to make contact with you. We are your friends."

The Carpenters' version heard in the show is actually a cover; the original version is by a band called Klaatu. According to the group's website, the song was inspired by a supposed event in 1953 when an organization called the "International Flying Saucer Bureau" encouraged its members to telepathically emit a message beginning with those words — "calling occupants of interplanetary craft" — in the hopes of making contact with alien life.

All of that sounds like, well, a lot, but makes sense in the context of AHS. Freak Show took place in Jupiter, Florida and featured the character of Elsa Mars, and aliens were a central force in Asylum's tumultuous plot. This Carpenters' song could be just yet another vague nod to outer space, or it might mean that viewers should gear up for more otherworldly terrors.

The next song our survivors hear is "The Morning After" by Maureen McGovern. It marks the first track they've heard since "Calling Occupants Of Interplanetary Craft" in weeks, and many of them think it means they're saved. The lyrics are optimistic — a sinister contrast to the reality of the situation — and for a moment, viewers might think things are looking up.

"There's got to be a morning after if we can hold on through the night, We have a chance to find the sunshine, let's keep on lookin' for the light. Oh, can't you see the morning after? It's waiting right outside the storm. Why don't we cross the bridge together, and find a place that's safe and warm."

They celebrate, sure that rescue is on the way, and that this song is some kind of rallying cry meant to symbolize their torture in the bunker is over. Fans who don't know better might feel an impulse to celebrate, until a devastating message — "18 Months Later" — flashes onscreen. They're stuck for the long haul. That same McGovern song isn't new for cataclysmic plots, by the way: It won the Academy Award for Best Original Song back in the '70s, when it was written for disaster film The Poseidon Adventure.

And finally, perhaps the most skin-crawling song featured in the Apocalypse premiere arrives in the last few minutes. "Tonight You Belong To Me" by Patience and Prudence fades into the scene just as a grown-up Michael Langdon — who may or may not be (but totally is) the Antichrist baby Vivien Harmon birthed way back in Murder House — strolls into the bunker.

The song — an objectively joyful tune sung by two young sisters back in the 1940s — is kind of creepy on its own due to its old-timey aesthetic, and it's particularly stomach-churning when placed within the context of the apocalypse. But this song also has previous ties to the AHS world, making it even more clear that the soundtrack has meaning.

Longtime AHS fans will remember that this same song actually played during the very first scene of the entire series, as two young boys broke into an abandoned home and met a grisly demise in the opening moments of Murder House. And, it also made an appearance in the Murder House finale, playing as the Harmons wreaked havoc on the new inhabitants of their home. Given that Season 8 of AHS is a Murder House/Coven crossover, it's definitely not an accidental reprisal.

The soundtrack viewers have heard so far could offer plenty of clues to what's coming, and Apocalypse is only just getting started. Keep your eyes — and ears — open for more as the horrors continue to unfurl.

More like this
An Ultimate Guide To The Music Of 'Rap Sh!t'
By Brad Witter
‘Squid Game’ Creator Hwang Dong-Hyuk Just Dropped A Major Season 2 Tease
By Brian Anthony Hernandez and Bustle Editors
Everything To Know About 'Evil' Season 4
By Meguire Hennes
The 'Better Call Saul' Creators Said "Never Say Never" To More 'Breaking Bad' Spinoffs
By Brad Witter
Get Even More From Bustle — Sign Up For The Newsletter