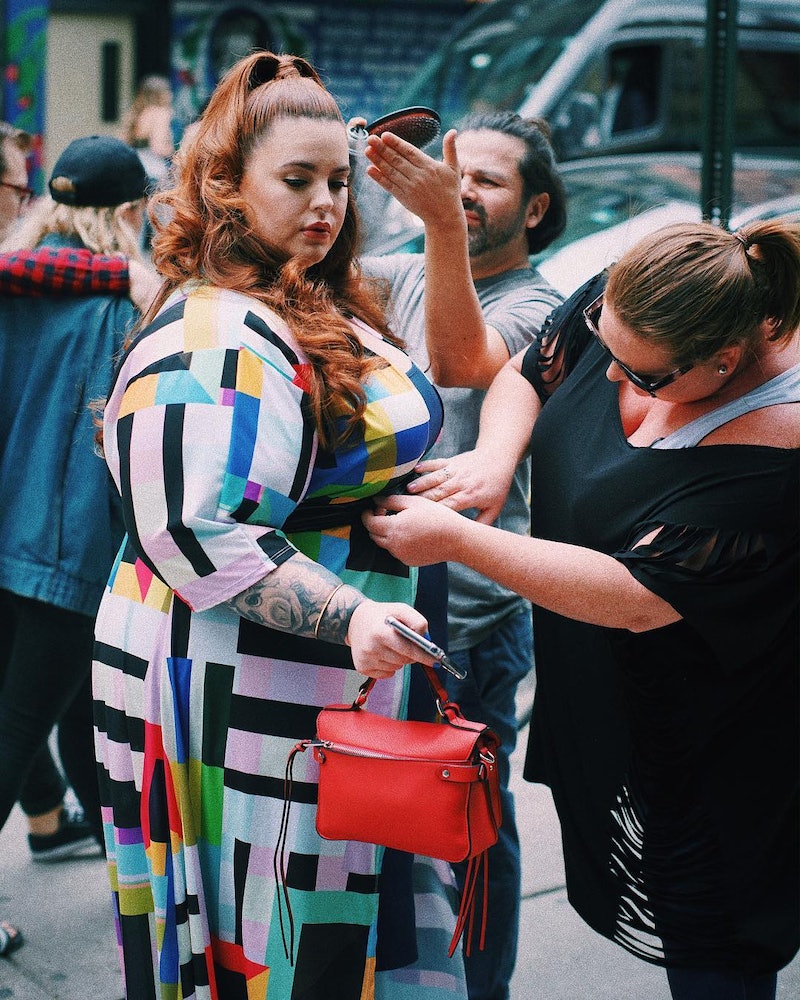 "If I wanted Chanel for a client, the likelihood of it happening is slim to none," Meaghan O'Connor, a stylist for plus-size women like Orange Is the New Black's Adrienne C. Moore and model Tess Holliday, tells me during a recent sit-down in New York City.

We've heard it time and time again from celebrities: It's not easy to find a red carpet gown to borrow when you are plus size or simply not a sample size. Take Crazy Ex-Girlfriend's Rachel Bloom for example. At the 2017 Emmy Awards, the actress told E!'s Giuliana Rancic she purchased her Gucci dress because the brand wasn't going to lend her one. Or Danielle Brooks, who last year told People that it makes her feel "less than" when she's getting ready for an award show and only has "four options and three of them are in black or blue."

O'Connor has dressed Moore for multiple red carpet appearances, and other clients for an assortment of events ranging from book tours to Beautycon. She acts as the middlewoman between her clients and designers, but even in 2017, when inclusivity is the new norm, isn't exactly surprised when brands say no.

"There are more brands that want nothing to do with custom plus looks than you'd think," she says. "And you have to remove the personal feeling. You have to remove the thought that this is offensive, this is rude. If a brand is saying no to something, could they just be sizeist? Yeah, they could. But at the same time, they could also be staying very laser-focused on their brand aesthetic and maybe my client isn't that."

As O'Connor explains, many high-fashion brands, from Chanel and Versace to Louis Vuitton and Prada, showcase the "ideal" image of the woman they want dressed in their clothing in the form of a celebrity or model muse. This person often stars in their campaigns, wears their designs on the red carpet and sits front row at their fashion week shows.

Think Alicia Vikander for Louis Vuitton, who creative director Nicolas Ghesquière described as "unpredictable," and able to play a myriad of different roles in his campaigns, Lily-Rose Depp for Chanel, who Chanel's creative director Karl Lagerfeld said is "stunning" with "all the qualities of a star," or Suki Waterhouse for Burberry, who said the brand's chief designer Christopher Bailey was looking for someone who "didn't look like a model" when picking a celeb to represent the brand.

"[Designers] use their muse as a vehicle for shaping and creating and historically, it typically doesn't waver," O'Connor says. As seen in the examples above, many designers have chosen young, thin, white women. There have been some exceptions when it comes to age and race (like Willow Smith for Chanel or Julianne Moore for Tom Ford), but in terms of size, a muse more often than not falls into a particular category.

Alicia Vikander in Louis Vuitton and Lily-Rose Depp in Chanel

And for O'Connor, this is an unfortunate, but still understandable excuse for why a brand might not want to dress someone who doesn't align with this image. "The big fashion houses work very hard to create a brand aesthetic," she says. "Gianni Versace became iconic because his muses were the five supermodels — and that was his brand, and his brand continued to be that."

But should designers expand how they define their muse? O'Connor says this is the biggest part of the plus-size conversation, but for some brands it likely won't happen anytime soon.

"You can't tell someone how to conceptualize their brand," she says. "If we were sitting with Michael Kors, I can’t say, 'Who is the women you design for? And can you change that please?'"

O'Connor adds: "Do I think there should be a broader image of who that person is in their mind? Sure, but for Christian [Siriano] or for Prabal [Gurung] or for Lela Rose or for Sophie Theallet, those designers already have that broad span, they have the ability to see beyond just one person. You can't really blame and point finger at brands who can't change who their muse is."

O'Connor believes that constantly pointing fingers puts attention on the problem but doesn't come with a solution, as the brands that are failing to include plus-size women "know who they are." Instead, she thinks we should focus on celebrating all of the designers trying to create a more welcoming industry.

"Younger designers, the younger generations, are starting to broaden the spectrum of who they're thinking in their head," she says. "The concept of the muse is changing. And because of that, the shift and the tide of fashion is changing. But the older houses, it is what it is. You can’t lasso someone's creativity. If they're creating it for one size and ethnicity and race, then we can only wish that they create for more than that."

O'Connor made sure to acknowledge that brand aesthetic is not the only reason a brand may say no. But more often than not, a brand will just say no without an explanation, say they don't have the time or resources to make a custom piece, they aren't lending at this time or that they'll "have to pass."

Not wanting to have to deal with excuses and conversations like these, O'Connor strictly sources from brands she knows will give her what she wants. "I approach each project realistically," she says. "I land on a list of brands and designers that I would like to approach. Nine out of ten times, that list won't include someone who is notorious for saying no. Why? Because it's a waste of time and honestly, there are so many designers who will say yes."

It's these brands — the ones mentioned above, and a slew of others like Tanya Taylor and Becca McCharen-Tran for Chromat, that deserve credit for changing plus-size fashion on the red carpet. We are now seeing women take risks and stray away from so-called "rules" they once might've followed because of their body shapes.

"It's people who are saying 'F it, forget about what we used to know, we're creating the new and this is it,'" O'Connor says. "And because of that stylists are seeing it more and saying, 'OK, I don't need to dress my plus client in an all-black, long sleeve gown. I can go beyond that.'"

O’Connor, who herself is a plus-size fashion blogger known as Little Lime Dress, says fashion bloggers also deserve recognition. "People are more outspoken, accepting and confident in who they are in the moment that they're in," she says. "I have peers who have truly paved the way to visibility."

As we're gearing toward the end of our conversation, O’Connor explains how there are only a handful of plus-size stylists, or those who have experience in plus, working with plus-size celebrities, and even less than this dressing celebrities for the red carpet. (The only stylist that came to her mind was Marcy Guevara-Prete, who has worked with Gabourey Sidibe.)

She believes this is the reason we spent years seeing all of the safer options on the red carpet, and also the reason she has continued to be vocal in spreading the message that fashion is not defined by size.

"If all of this disappeared tomorrow, my job was done because somewhere there's someone in high school trying to find a prom dress, who's plus size and doesn't feel good about herself, who saw [Adrienne] on [the red] carpet and felt great and knew they could go get something," she tells me.

O'Connor remains hopeful that one day high fashion houses will be dressing plus-size women, but until then, instead of focusing on why they won't or trying to change something that has been one specific way for so long, she is choosing to work with inclusive designers (like Zelie for She for the SAG Awards in 2015 and 2016) and continuing to advocate for inclusive fashion alongside her celebrity clients and plus size blogger peers.

"The only way to move the needle is to be relentless in the pursuit of inclusivity," she says. "A great way to do that is to continue to highlight the brands that are dressing plus-women, show them love, support them, shop them, put them on the red carpet, put them in the spotlight and praise them for being inclusive."

Once this happens, O'Connor thinks the high fashion brands might eventually follow suit. Her two words for them? "Hurry up."