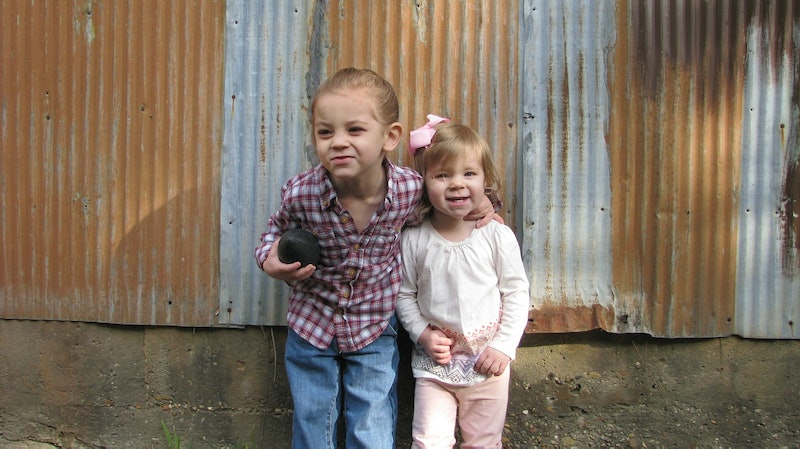 When I was a kid, my mom often had to call my brother's and sister's names before correctly landing on mine. "Sam! Alaina! MEGAN!" has always been a little joke in our family — and I know we aren't alone. It's left many of us wondering why we sometimes mix up people's names. Is it because we're distracted and not fully paying attention? Do we somehow confuse people in our minds, even if they're not much alike physically or in terms of their personality? Why do we sometimes call people by the wrong names? Luckily, science has an answer — it's largely to do with how your brain keeps itself organized.

Cognitive scientist Samantha Deffler, from Rollins College in Florida, discovered after surveying 1,700 participants that mixing up people's names is more common than we knew. Half said they had been called by the wrong name by someone close to them, with 95 percent saying it was a family member who made the mix-up. But why?

Here's the deal: We have a tendency to mentally file everyone to metaphorical folders in our brains. When we place people in the same folder, we can sometimes unintentionally switch their names. That would explain why my mother, along with many others, would confuse the names of her children — not only are they all filed in the "family" folder, they're also part of the "offspring" folder.

The idea even extends to our four-legged friends, meaning we'll use our dogs' names when we meant to call a relative. Why? We consider dogs family.

So, while it isn't at all random, this study says that "misnaming" (as this behavior is sometimes called) doesn't, in fact, have anything to do with appearances, age, or gender. It should be noted, however, that another study found that gender does influence the matter. Another factor up for debate? How similar the names sound. And while some research says this quality doesn't play a huge role, others disagree.

Some research has indeed found that the similarity of name sounds does affect which names we use incorrectly. Studies have found that we tend to confuse names that have like beginnings or endings (such as Patricia and Felicia) or similar vowel sounds (like Rob and Don). Sure enough, another study, published in the scientific journal PLOS One, found that children experienced their parents mixing up their names with siblings' much more frequently when either the initial or the ending sound of the names were similar.

Out of the 334 participants surveyed, 121 said their names were often switched with those of family members, and 20 said they had been called by the name of the family pet.

But there's a dark side to the psychology of misnaming, too: It can have racist undertones. While some researchers say that race is largely irrelevant, others report quite the contrary. While the act of misnaming isn't necessarily offensive in and of itself, implicit biases can cause some pretty offensive things to happen.

The cross-race effect, as psychologists call it, occurs when the aforementioned brain folder is one categorized by race. Thus, people will sometimes confuse, say, two Asian people with each other, or two black people. As it's already been established, we don't confuse names because people look alike; why, then, might we mix up two people of the same or a similar race? Is it because somewhere in our minds, we've internalized the idea that all Asians are generally similar to one another? (They aren't.) Or all black people are the same? (Again, they aren't.) Possibly. It's also hard to ignore the fact that these racially-charged brain folders are likely a result of our culture considering "white" to be the default (which it really, really shouldn't be). And while we don't necessarily mean anything consciously malicious by it, it's still a form of racism nonetheless, regardless of how subtle or unintentional it might be.

In this example, it's easy to see how our cultural landscape affects our perceptions — and points out where we need to do better. Confusing your sister's name with the dog's is one thing, but it turns out there's a lot more to it than just that.